Probably the most touristy rock star shrine on the planet (he must be turning over on repeat in there), The Doors frontman Jim Morrison’s final resting place is in the Pere Lachaise Cemetery, Paris. Due to his enduring popularity, the grave is one of the city’s most visited sights, and has been subject to a chequered history as long as the list of people it has pissed off. Morrison died in mysterious circumstances in Paris in 1971, aged just 27. His longtime partner Pamela Courson claims to have found him dead in the bathtub of their Paris apartment, and suggested he had overdosed on heroin. However, no official autopsy was ever performed, giving rise to a hail of wild conspiracy theories (including one that J Edgar Hoover had him bumped off in an effort to halt the hippy movement).

Since Morrison’s burial, the grave site has endured a tumultuous time. A protective shield placed over the grave by French officials was stolen in 1973. Then, in 1981, a Croatian sculptor commemorated the 10th anniversary of Morrison’s death with a bust of the singer and a new gravestone. Visitors proceeded to mercilessly deface the bust until 1988, when it, too, was nicked.
More recently, the French authorities sought to exhume Morrison’s body and move his grave to another site, such was the nuisance caused by his devotees. Fans often crowd around the shrine, smoking weed, singing and vandalising surrounding tombstones (which, naturally, upsets many relatives of the other residents of the cemetary). Others break into the cemetery at night to party with Jim until the wee hours.

Eventually, instead of digging up The Doors legend, a security patrol was established to protect the other graves in the Pere Lachaise Cemetery. So, luckily, you’re still able to visit the main man, and at no cost. Other famous graves here to investigate if you have time include those of writers Oscar Wilde and Marcel Proust, musician Frederic Chopin, and singer Edith Piaf.
pere-lachaise.com

From a distance, the moss-speckled benches in Seattle’s Viretta Park might not look much. But peer closer and you’ll see a mass of graffiti and etchings that commemorate indie/punk rocker Kurt Cobain, of Nirvana.
The park is next to the house on Lake Washington where Cobain met his end (in the garage, pictured). A visit will likely have you meet fellow fans, who come to lay flowers at the site, and even hold candlelit vigils.
visitseattle.org 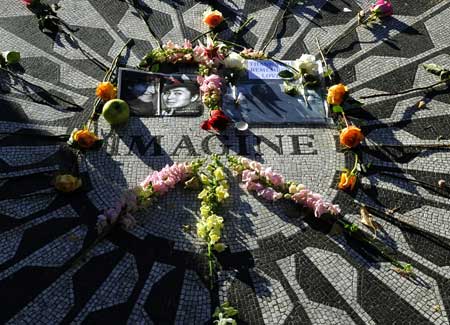 The Beatle has an area of New York’s Central Park devoted to him, aptly named Strawberry Fields. The 2.5-acre area between west 71st and 74th streets marks where Lennon was walking when he was shot dead in 1980.  Strawberry Fields’ focal point is a black-and-white mosaic that spells out ‘Imagine’, after Lennon’s hit song. Fans lay flowers here and take a moment in this self-styled ‘Garden of Peace’ to reflect on their favourite star.
centralpark.com

The Zion Bus Line in Jamaica is something of a travelling shrine to Bob Marley, blasting his tunes as it takes you on a tour of the life and times of the country’s most famous son. The five-hour adventure ends at the village of Nine Mile, where the King of Reggae was born and finally laid to rest. Not only do you get to pay your respects at the grave of the great man, but the tour price (about £53) includes an onboard supply of rum punch and Jamaican patties. Love it.
chukkacaribbean.com

Sure, there’s no shortage of Elvis shrines around the world, but our absolute favourite is the Elvis Cafe & Restaurant in Israel, just for its sheer incongruousness. In the tiny town of Abu Gosh, on the road from Jerusalem to Tel Aviv, this American-style diner is a living tribute to all things Presley. Pictures of the King plaster the walls, you can eat your burger beside a life-size gold Elvis statue, and you can even knock back Elvis wine. A-mazing.
gojerusalem.com

The Pyramids of Giza, Egypt

Sloping off by train