Why you should visit York this Christmas

Given its northern climate, you might be surprised to hear that York is best seen in winter. The winding little streets of cobbled stone are warmly lit and filled with carol singers, conjuring a festive atmosphere Dickens would have approved of. And with the newly extended St Nicholas Market, plus a string of seasonal events, ’tis truly the season to visit York.

York’s magnificent Gothic cathedral – the biggest in Northern Europe – is a good place to begin a tour of the city at any time of year. But with the church bells ringing, the Minster is an essential starting point at Christmas. Pale light seeps through the enchanting stained glass windows while angelic choirs sing beneath vaulted ceilings, making it easy to feel the Christmas magic here, whether you’re religious or not. There’s a full programme of concerts in December at the Minster, while Advent Masses are packed.

On the lighter side, the Theatre Royal’s red-and-gilt interior is a glamorous setting for the famous York pantomime, led by the longest-running Dame and local icon Berwick Kaler. Seasonal sounds can also be found at the National Centre For Early Music, with medieval numbers and folk compositions. 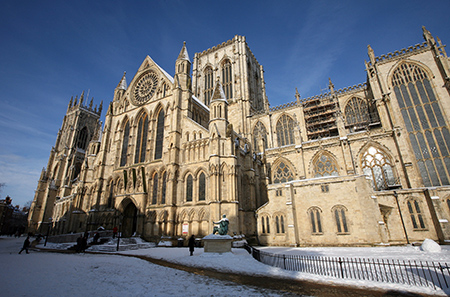 Perhaps York’s best-known winter attraction is the St Nicholas Market. Usually held over one weekend in November, it’s become so popular that it’s running from 27 November – 21 December this year. Sidle past the little wooden huts lining Parliament Street and pick up jewellery and ceramics by local craftsmen, or try homemade mince pies and mulled wine. The best place for the latter, though, is at the festive bar Barley Hall – York’s masterful medieval restoration piece (£2 entry). Kids can also meet Father Christmas here (£12 per child).

Having whetted the appetite, what of dinner? York is blessed with unpretentious restaurants serving top British food, and several of them are pulling out the stops for Christmas. Café Concerto is run by husband-and-wife team Ian and Rozz Hancox and will be serving its seasonal favourite throughout December – the toasted ‘Christmas Ciabatta’ filled with turkey breast, caramelised onion, stuffing and homemade cranberry. Alternatively, head to the lively Il Paradiso del Cibo for an authentic Sardinian Christmas.

Once England’s second city, York had diminished by Georgian and Victorian times, but the aristocracy were still thriving. Several museum-houses show off the grandeur of the times. Lord it up at 300-year-old mansion Castle Howard, with log fires, craft markets, live music and enormous Christmas trees (£14). Or the 18th-century Fairfax townhouse is made-over for a traditional Georgian Christmas, including a stunning dinner table display (£6 entry).

Kirkgate at the York Castle Museum tantalisingly recreates a Victorian street (£9.50 entry). Dressed for Christmas with old toy shops, fondant chocolate-making and bauble-craft workshops, it’s a fitting tribute given that the Victorian era helped save Christmas by clawing back lost traditions (partly thanks to old Scrooge, who can be found nosing about the street).

A stone’s throw from the Minster, an ideal wintry place to stay is The Judge’s Lodging. Reopened in January after a six-month renovation, the property dates back to 18th century and is a grand home away from home for Christmas, with traditional feasts in the restaurant, and doubles from £100.

Gig: Notes from Home – the Arrival