Wintour, the editor of American Vogue, joined a host of other celebs in the royal box to watch the Wimbledon showdown. 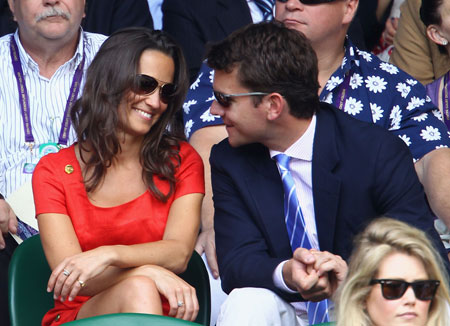 Pippa Middleton and Alex Loudon at the quarterfinal round match

between Roger Federer and Jo-Wilfried Tsonga

on Day Nine of Wimbledon.

Twitter was abuzz with news that famously po-faced Wintour is at Wimbledon.

“Finally spotted Anna Wintour. She is flicking her hair around and laughing like a drain. She never does that at the shows,” tweeted  Laura Craik.

While Fashion Foie Gras wrote: “Anna Wintour's in the Royal Box at #wimbledon today. Not loving the outfit even if it is Prada SS11.”

Meanwhile Andy Murray’s mother said that although she is fan of Feliciano Lopez – who she’s nicknamed Deliciano –  she would be cheering for her son today.

Mrs Murray is said to have embarrassed her son with her obsession for Lopez.

"I'm just one of a lot of Feliciano female fans,” the Daily Mail quoted her as saying.

Murray’s sterling performance so far means that demand for tickets is soaring.

Murray fans could be willing to pay up to £20,000 to watch him if he gets to the Wimbledon final, according to a ticket seller.

Aussie study reveals butter may be better for you than margarine