It’s billed as a life-changing time during which you’ll make new BFFs, improve your skiing or snowboarding and spend months in the fresh mountain air.

For many people, working a ski season is a dream job – earning while playing in the white stuff for up to six hours a day. But it’s not all fun and frolics – you do have to earn your keep, and don’t expect that to be a lot.

The most popular job on the slopes is a chalet host. You’ll be responsible for cleaning as well as preparing breakfast and cooking dinner.

You work shift hours (usually 7am to 10am and then 5pm to 9.30pm) with one day off a week. And, on transfer days, you’ll be expected to get up at the crack of dawn to scrub the chalet from top to bottom.

“Getting up early to cook guests’ breakfasts, usually after a few drinks and only a few hours’ sleep, or cleaning the whole chalet on transfer day were the worst parts of the job,” says Richard Hudson, who manned a 30-person chalet for Esprit Ski in La Rosière, France.

“It is hard work, the days are long and you don’t get much time for yourself,” Hudson, 24, from Chalk Farm, adds. “So be sure you can deal with a hectic lifestyle before signing up.

“But I’d do it again in a heartbeat. I still rate it as probably the best six months of my life – and I was on the slopes nearly every day.

“Being a chalet host gives you more time on the slopes than any other resort job. Coupled with awesome nightlife, you’ve got an ideal job.” 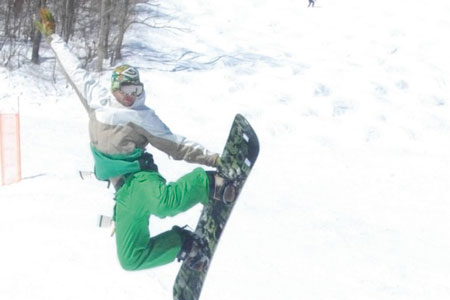 As your main duty will be caring for guests, making sure they’re well-fed every day, put yourself ahead of other candidates by booking on to a cookery course, which shows you’re able to cater for large groups.

The pay varies, but, as a chalet host, you can expect to take home about £80 per week. For David Miller, it wasn’t about the money, but all about getting time on the slopes.

“Your accommodation, food, lift pass, insurance, ski hire and any lessons you want are all provided,” he says.

“At the beginning of my first season I could just about stand up. By the end, I was going over jumps popping backside 3s. It is the best environment to learn in, as your workmates will teach you to snowboard and put the time in to make sure you pick it up and progress quickly.”

If you don’t fancy being a host almost 24/7, there are plenty of other positions available. Ski reps are sought-after.

As the main point of contact for guests, you’ll be dealing with problems, as well as arranging après-ski events. In to beauty? Therapists and masseuses often find work, taking care of aching limbs.

Or you can train to be a ski/ snowboard instructor; work in a bar or a restaurant as a chef or a waiter in a resort; bag a job driving; or get involved at a managerial level. 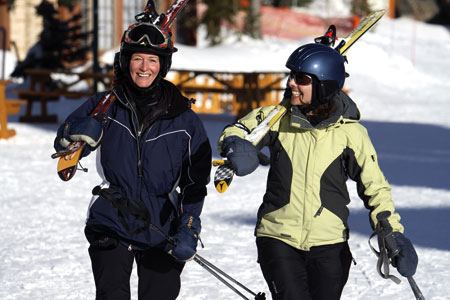 Leila Dukes, 28, worked as a chalet host in Tignes for one season, before heading to Morzine to be a restaurant manager at a hotel with more than 200 guests a week, working for Crystal.

“I was responsible for a team of 18 staff across breakfast, lunch, afternoon tea and dinner,” she says.

“I got on the slopes up to four times a week. I did my first season having been able to ski since the age of five, but never having snowboarded. Now I’m a better snowboarder than skier.

“The pay was enough for beer money, and the contract included accommodation and food, so that’s all I needed. I’d definitely do it again, it was one of the happiest times of my life.”

As a travel fan, you could find yourself on the slopes anywhere in the world. In Europe, France is the most popular option, while it’s cheaper to live in Austria.

Wannabe pros tend to head to Switzerland, but expect the cost of living to be high.

And it’s not just months of a jolly that will count against your career.

Dukes adds: “I did it as an experience and to make friends, but I have had employers in the ‘real world’ who have been impressed by my seasons – I guess what they show is that I had drive and independence at a young age.”

Can you make the skis less slippery, I keep sliding backwards when I try to get to the lift queue?

I’d like to try snowboarding but I’m comfortable on my skis, could you just fasten them together for me with Sellotape instead?

Is there anything you can do about this weather/ snow?

Is that a gluten-free toaster?

Do you have a hosepipe ban here at the moment?

So if it’s winter in New Zealand when it’s summer in America, what month is it there?