Angelina Jolie attended the Salt premiere in London’s Leicester Square last night, and dismissed rumours that she is set to play Marilyn Monroe in an upcoming biopic.

Jolie arrived at the Empire Leicester Square to the screams of hundreds of fans. Wearing a  £3,000 Amanda Wakely gown, Joile looked beautiful but skinny and experts have attributed the bulging veins on her hands to too much exercise.

The premiere was for Jolie’s new movie Salt, in which she plays Evelyn Salt, a CIA agent on the run after being labelled a Russian spy.

Angelina said of her role in Salt: “Other action films I’ve done were based in fantasy, this was based in reality so had to make her tougher and meaner.

“I love dressing up morphing into different characters.”

It’s been reported that Jolie will play Marilyn Monroe in an adaptation of Andrew O’Hagan’s The Life And Opinions Of Maf The Dog, And Of His Friend Marilyn Monroe. 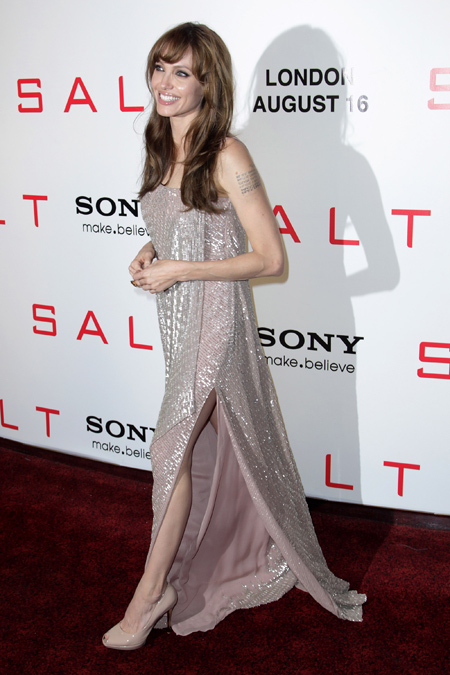 George Clooney is said to be playing Frank Sinatra in the movie, which centres around the last two years of Monroe’s life and is from the perspective of her Maltese terrier, a dog that was given to her by Sinatra in 1960.

However Jolie told Sky News Online at the Salt premiere that she didn’t know anything about the Monroe movie rumours.

“It’s really funny because I have just heard about this for the first time today,” said Jolie from the red carpet. “It’s news to me. I’m flattered I suppose.”

When asked about the Monroe film by TV presenter Edith Bowman, who was also at the Salt premiere, Jolie laughed that she “would have to call and ask George Clooney”.

Woman dies after posting to Facebook while she was driving

Football: Arsenal swoop for Arteta ahead of transfer deadline

Sex and the Scenery 9