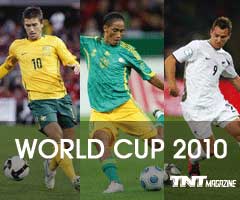 On June 11, 2010 the Fifa World Cup kicks off in Johannesburg and following the release of the draw, the speculation now goes into overdrive.

Bafana Bafana, the Socceroos and the All Whites now know who they will face in the group stages and can start analysing their fixtures and researching their opponents, searching for any stray skerrick of insight, any clue to how their team might fare.

It’s still seven months before it all gets underway but with the release of the draw, we’re into the home straight and the serious discussion begins.

The hosts got a leg-up being in pot one alongside the powerhouses, but then got stuck with France anyway.

World Cup hosts have a history of surprising, but it’s hard to see a sometimes dishevelled team pulling it all together sufficiently to upset any of the more fancied sides in their group.

Midfelder Steven Pienaar, who plays for Everton, over here needs to step up and play out of his skin. South Africa need a hero.

Maybe they can pinch a draw against Uruguay or Mexico, but it won’t stop them going out before the knock-out phase.

Not an easy draw for the Socceroos, but if they can eke out a draw against Germany and pip Ghana or Serbia, they’re still in the hunt.

Australia would have been hoping to draw at least one soft side, but it didn’t happen, with all their challengers boasting players from the world’s top leagues.

The absence of a world-class striker hurts Australia – that’s why the finishing skills of Tim Cahill will be vital to their chances.

Do they have enough players who can turn a match? They’ll have a crack, but may be outgunned. A group stage exit looms.

The Kiwis got a draw Australia would have been pretty happy with – Italy will be tough but Paraguay and Slovakia are both eminently beatable.

Still, it’s hard to shake the inkling that the Kiwis are just happy to have made the finals after a 28-year absence and would be rapt with so much as a single win.

Captain Ryan Nelsen – the only Kiwi in the English top flight – will need to hold the defence together to prevent his side leaking goals.

They just don’t have enough guys with big-match experience.

Could pinch a surprise win but won’t be good enough to go through.

How the groups line up

Likely to progress: The hosts might have fancied their chances of progressing but with France and Mexico in their group their chances look shot. France can be fickle but should have enough quality to qualify top.

Likely to progress: Argentina should cruise through here, failing a couple of massive boilovers. Nigeria can be brittle in big tournaments, but should be safe enough ahead of outsiders Greece and South Korea.

Likely to progress: The Poms got dealt a winning hand. The match against the Yanks on June 12 is a programmer’s delight and could be tricky for England but Algeria and Slovenia are straight off the wishlist.

Likely to progress: Assume Germany progress on the back of three clinical, nerveless performances. From there, Serbia and Ghana are hard to split, with Australia the underdogs in a group that offers up no easy points.

Likely to progress: The Netherlands have plenty of stars and should prevail, with Denmark and Cameroon jostling for second. Give the nod to Cameroon, provided blue-chip striker Samuel Eto’o is fit and firing.

Likely to progress: Hopefully the Kiwis honour the ANZAC spirit by beating the diving Italians. If not, Italy and Paraguay are likely to go through, but New Zealand’s hopes would be bolstered by this draw.

Likely to progress: The Group of Death. You have to back Brazil’s record, but the showdown between Drogba’s Ivory Coast and Ronaldo’s Portugal looms as the highlight of the group phase. Ivory Coast by a nose.

Likely to progress: Spain, with stars all over the park, have been widely tipped to break their World Cup duck and an accommodating draw has seen their odds shorten even further. It’s Spain, then daylight, then probably Chile.