Black Friday kicks off with iTunes scan and pepper spray

The Black Friday malware appears to be an email from the Apple iTunes store telling victims they have been sent store credit, but if users open the attached Zip file hackers will gain access to their computer, reports the BBC.

As well as giving hackers a chance to steal passwords and other personal information, the malware slows down computers and may destroy files, according to the Eleven security blog.

In more gloomy Black Friday news, shoppers were doused in pepper spray in a Los Angeles Walmart when the bargain hunting frenzy got out of control.

An estimated 152million people are expected to shop over Black Friday weekend, up 10 per cent from last year, according the National Retail Federation.

Black Friday is seen as the start of the Christmas shopping season in the US. Shops lure in customers with one-off discounts and offers and the Black Friday weekend is the busiest time of year for US retail. 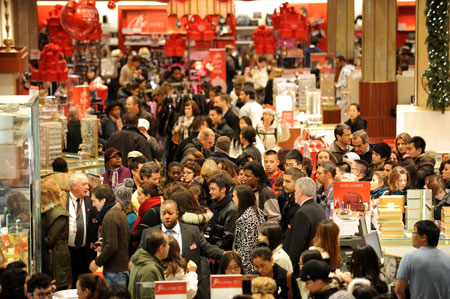 The day after Thanksgiving was given its name by Philadelphia police in the1960s because of the traffic jams caused by shoppers.

Black Friday is one of today’s most discussed Twitter topics and reactions are mixed.

“Pulling an all-nighter to be at the mall by 4 AM just so I can possibly get a free gift card. It’s all about the adventure, right?” said one person.

Another tweeted: “You know you’re a dedicated #blackfriday shopper when you steal your great-grandma’s handicap sticker.”
Others are less than excited about the retail frenzy.

“I’d rather peel the first 3 layers of skin off my sac and then dip my reddened balls into boiling vinegar than go shopping on #BlackFriday,” was one person’s verdict.

In a similar vein was this tweet: “I’d rather tear my eyes out slowly than physically go shopping on Black Friday. People who do have a secret death wish.”

The Dandy Warhols at The Forum