X Factor 2011: End of the road for Diva Fever and Storm

The acts – as well as Belle Amie – were in the final three, with Scottish-American singer Storm Lee the first to be kicked off after scoring the lowest number of public votes.

It meant two of Simon Cowell’s remaining three acts faced a sing-off – although the judge was spared voting off one of his groups, after Louis Walsh, Dannii Minogue and Cheryl Cole all saved Belle Almie. 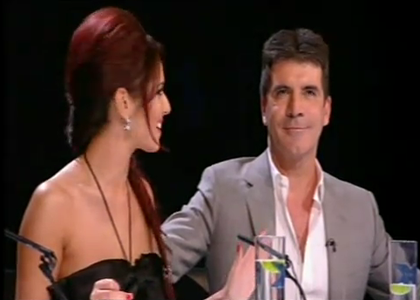 The girl band’s version of Fergie’s Girls Don’t Cry saved them from the axe, while Diva Fever – comprising Craig Saggers and Joe Al-Smadi – failed to win the judge’s over with a performance of I Will Survive.

Storm had performed Bruce Springsteen’s Born To Run – but didn’t convince the judges he had the potential to win the competition.

After the double elimination last night, Dermot O’Leary, host of the ITV1 show, called Diva Fever a “breath of fresh air”.
The group told him: “We have had the time of our lives. We wanted to have fun and make people smile.”

They joked that they blamed the song choice on Saturday night – a rendition of Duck Sauce’s song Barbra Streisand on the heroes-themed show – for their departure.

Cowell said: “I accept full responsibility; I am sorry.”
It means there are now 12 artists going through to next week’s show.

On Saturday night, Walsh’s act Mary Byrne received her second standing ovation on the show after wowing the audience with her version of Dusty Springfield’s You Don’t Have To Say You Love Me.

However, it seems it’s not only the viewers who have been won over, after finalist Wagner Carrilho admitted on the show Byrne is a “special lady” – he made the statement after Cowell asked them if they were “getting it on”.

It comes amid rumours Katie Waissel and Matt Carle were caught in bed together after a kissing game at the contestants home. However the pair have denied having sex – which is against the TV show’s rules.

There was also fighting amongst the judges again this week – and Cowell admitted that he could change the line-up for next year.

Although it looks as though Cole will be following the multi-millionaire music mogul to the States for the launch of X Factor over there. Cowell revealed that if the Girls Aloud star does well in the next 11 weeks of the UK show, she’s in the running for the judge’s slot in the US.

Hitting out at the other judges, he added:
“No job is safe here – you’ve got to be popular with the viewers.

“You’ve got to earn your right to be on the show.

“This is a very good, highly paid job.”

Run, run, as fast as you can there’s a whole house made of gingerbread, man!