You little monsters! England Sevens players dress up to showcase their rugby skills

In a series of distinctive photographs, the England players’ reflections were adapted to represent their personal characteristics.

The rest of the squad were asked to share their thoughts on each player’s monster attributes before the players were transformed for the photo shoot. The shoot lasted eight hours and included a faux fur morph suit, layers of body paint, some silicone prosthetics and a pair of fake ears and teeth.

Marcus Watson, described by his teammates as having sublime vision on the field, was given a third eye, and a scaly, streamlined appearance to give his monster an aerodynamic advantage with his impressive speed. Mat Turner, known for his rugby brain and fierce competitiveness, was given a supernatural head and some fierce fangs, with his trademark look of socks down.

Tom Mitchell, friendly and approachable off the field and tough and strong on it, was layered with pink fur reflecting his role as a key playmaker for the team. His infamous blonde quiff also made it onto his monster.

Tom said: “It was good fun playing on the idea of ‘the monster in you’ and seeing how  each other’s physical characteristics and playing strengths were reflected in our monster makeover. Fans go to extreme efforts to show their support and get into the spirit of the theme at Twickenham, so it’s great to be able to play our part.” 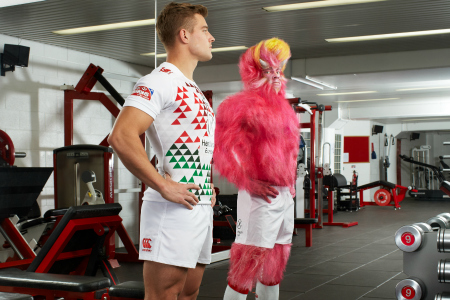 Album review: Laura Marling – I Speak Because I can

Reasons to go to Sandbox Festival in Egypt

One of the lads: Andre Villas-Boas conducts a little team bonding in the Bahamas