Stand-up comedian Sanderson Jones’s Comedy Sale project is, quite simply, unlike any other comedy show you will have been to, and for two reasons.

Firstly, don’t expect to sit peacefully at one of his shows as a passive observer to be entertained. You very well may become an integral part of the show, presented up there on the big screen for all the audience to see.

And secondly, tickets for his shows are only sold in person, either as Jones walks the streets of London or through pre-arranged meetups set up through his website – Comedy Sale is the world’s first and only hand-sold comedy show.

“I used to do my own flyering,” Jones tells us ahead of his latest stint in London taking his project to the people. “When I did that I would do my own shows and I’d have met lots of people in the crowd.

“Then one year in Edinburgh [2010] I thought it would be even better if I knew everyone, it would be a wonderful atmosphere. So I went the whole hog and only let in people who’d bought tickets from me.” This thought then took a turn for the personal.

“So then I thought: ‘If I knew everyone in the audience, then I can also research them online and incorporate them into the show so it is as much about the audience as it is about me’.”

Basically, if you’ve not been on top of your Facebook privacy settings or have a particularly exhibitionist Twitter feed, then Jones is going to have discovered this, and soon the rest of the audience with whom you are sharing a room will, too. 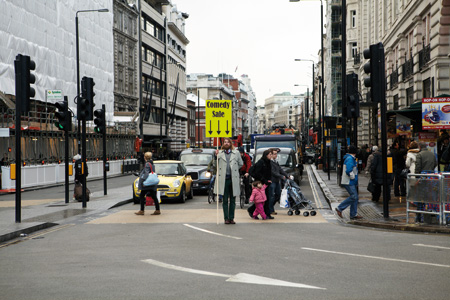 “I only do it so it is fun,” Jones insists, only partially reassuringly. “You could do it and be quite cruel but it’s like when you’re hanging out with a mate and you take the mickey out them. It comes from a nice place.”

Involving the audience in a show that is mostly about them is a risky business, no?

All manner of awkward moments could arise – people who thought the idea of laughing at someone else’s expense was hilarious could take on a whole different point of view when it is their secrets being shared with a room full of strangers.

Despite the inherent dangers, Jones says this shock-and-awe approach to stand-up comedy has only really gone wrong once, and even then it was entirely accidental.

“When you do something funny with a picture of someone in Photoshop, a lot of people ask you to send it to them. They really like it. But one time it did backfire. I have a bit of stand-up about the time I sucked a man’s willy. I didn’t really, but I thought it would be a funny story.

When this guy bought a ticket once he said: ‘I liked that bit you did about sucking a guy’s wang.’ He was a music journo and said he’d been to a festival once and met Rufus Wainwright and joked that he liked him so much that he ended up going down on him.

I told this story during the show and a friend of mine in the audience said that the guy was there with his girlfriend, who spent the whole show asking him whether it was true or not.

He denied it, saying I had made it up. But I think you should take pride in giving pleasure to Rufus!” 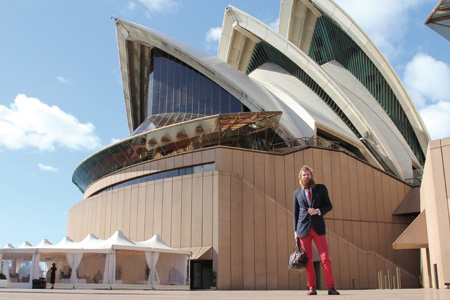 Jones began beating a path around the streets of London last year, taking his show to the people, which culminated in a gig at Islington’s Union Chapel in October 2011 – “It was weird, there were 800 people there and previously I’d only done solo shows to 80 people.”

He went one better this year and took Comedy Sale on the road Down Under, taking it to cities around Australia before signing off with a show at none other than the Sydney Opera House, with no venue, phone or online sales – just face-to-face sales alone.

“I rang them up and asked if I could play there, and this woman suggested I play the Concert Hall, which is 2000 people. I thought great, let’s do it.

“But when I got there it turned out they didn’t want me to play the Concert Hall but [350 capacity] The Studio. It was a great show, though.”

The tour of Australia was not all about the glamour, though, as the prized Opera House destination might suggest.

Couchsurfing his way around the country, Jones encountered a hippy in the hills on the outskirts of Adelaide who described himself as a freelance happiness guru.

“Does that mean he is an unemployed happy chap?” Jones’s cameraman mused.

He also encountered some “massively homophobic” far-right preachers, too. “I went and had a lot of fun with them,” he recalls.

“A friend of mine dressed like the devil and I wore a robe like Jesus. One of them had a crucifix which I tried to get on, saying, ‘don’t worry, I’ve done this before,’ to which one of them asked: ‘Is this the real Jesus?’”

As well as taking the audience as his launch pad for a series of daft sketches and stories, Jones also uses the internet, not just for pre-gig research, but within the show too, especially for the famed chat roulette segment.

“It’s like Skype only you don’t know who you are going to be talking to,” he explains for the uninitiated. “So it is mostly middle aged men with their willies out. For most people that is a problem, but I saw the opportunity for a great joke.

“At a show in Adelaide with 750 people in the audience, I got the camera and zoomed in on one girl who I had asked to be the ‘wank bait’. We put white sheets behind her so it looked like she was sitting at home and I got the audience to be quiet. 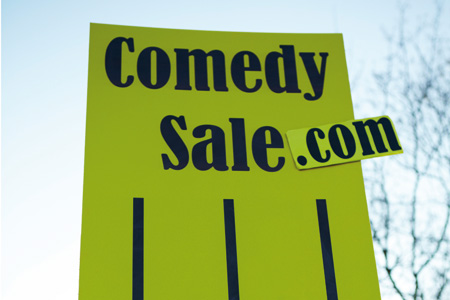 “The first guy we found was wanking, but the girl in the audience got really into it – she dropped her top down, took down one bra strap, then the other, and this guy was going mental.

Chat roulette has since become a regular feature in the show, although Jones admits he has had to click away before someone else’s climax upstages his show’s own.

It would be easy to envisage Jones as a cruel ringmaster, someone who takes pleasure in the discomfort of others, but the truth, of both man and show, is nothing of the sort.

Despite teasing for the sake of comedic titillation, the atmosphere at his gigs is one of unity, where audience and performer are one in many respects.

There are regular parties and get togethers for the named and shamed, and you can even arrange to meet Jones for a game of beer pong to collect your ticket, as others have done.

Even reviewers, who’ve occasionally felt the sharp end of his comedy focus, seem forgiving and won over; he has cajoled some into a ‘Critics Obstacle Course’, in which journos are put through their paces, made to jump through hoops – literally – and then face Jones in a custard pie fight.

“One reviewer had tweeted that his first housemate was a sometime nudist,” Jones says of one particular encounter with a critic.

“So to get the best review possible I wanted to make him feel at home, of course, so I got a naked man to sit next to him for the show.”

His latest London Comedy Sale began last week at his new weekly residency in north London’s The Star of Kings pub, and he has lofty ambitions for where it may end up.

“I want to find a more ridiculous place to do this show, the Royal Albert Hall maybe,” he ponders. “I sent them an email last week but I haven’t heard back.

“The Hammersmith Apollo would be a fantastically silly place to do a show, too, for a guy who has no TV presence. Or I might go the Secret Cinema route and try and find some disused fire station and do one there.”

While he doesn’t know where this latest run will take him, or who and what it will put him in touch with, one thing’s for sure. “It’s become the weirdest job and I didn’t expect that!” Jones laughs.

Most of his audiences would probably say exactly the same.

Anger as white Australian gets job at black magazine