An old couple in Oregon have become Youtube celebrities after they accidentally filmed themselves trying to take a photo on their new laptop. The result – named Webcam 101 for Seniors – has gone viral.

Bruce Huffman, 86, and his wife, Esther, 79, who live in the Hillside Retirement Community in McMinnville, were trying to work out how to use their new computer when they made the video.

When their granddaughter saw the result she posted it to Youtube where the old couple have been met with admiration for their charm, if not their technical skills. 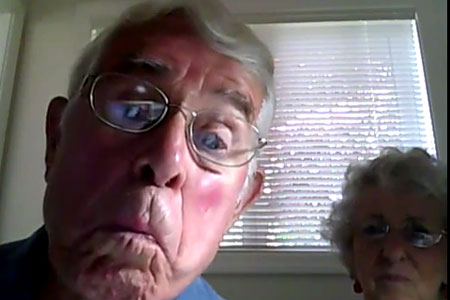 Apparently, Bruce and Esther Huffman’s granddaughter had previously shown them how to record a video with the webcam. However, the couple were thrown when they sat down to figure out the machine on their own.

Getting bored, Bruce begins making monkey faces into the camera, before yawning, singing, burping and getting frisky with his wife.

Clown around and pointing at his wrinkles, he says, “Esther, I’m so saaad!”

Moments later, he tells his giggling wife, “Just drop your dress a little bit and see your boobies."

“Lovely people. I want this to be me and my spouse when we're old and grey,” writes one.

Another says: “They sure are a feisty couple! Love the random nonsense the old guy pulls and how he flirts with his wife!”

The Oregon couple have been tracked down by the Huffington Post, which Esther told:

"We certainly didn't plan it, but there is so much bad news out there. We are glad we could put something fun out there. We like to have a good time and if it makes people laugh, that's ok."

She said the only thing she would change would be to spit out her chewing gum.

“I look like a cow chewing gum so quickly."

The story calls to mind a Twitter page apparently set up by someone for their 81-year-old father, who believed it was a Google search.

His searches for “princess swimsuit breasts”, “cold feet” and “soft nuts” caused much mirth, although it is debatable whether the Twitter account was a hoax.

Harry Styles has snagged himself another older woman

Immigrants to be charged £1000 NHS levy under new plans

Kickin’ back on Keppel