This is Sam Simmons’ predictably off-kilter summation of his latest show, Shitty Trivia, which comes to Soho this week, and it is absolutely nothing less than we would expect from this Aussie king of the absurd.

Former Triple J DJ turned comedian Simmons has made a name for himself by revelling in the surreal and the preposterous, from making bread shoes on stage and snogging audience members’ knees to throwing out sporadic silly dances, pie charts and non-sequiturs that make your brain fizz as it struggles to keep up. But this new show brings something a little different to the full-on sensory assault that would be expected of Simmons.

“There’s not as much interaction at all,” he says of Trivia’s structure, shaped as it is around a procession of baffling trivia questions akin to his regular slot on Triple J. Ask a straightforward question, get an obscure and extremely obtuse answer leading to all manner of hilarity, basically. 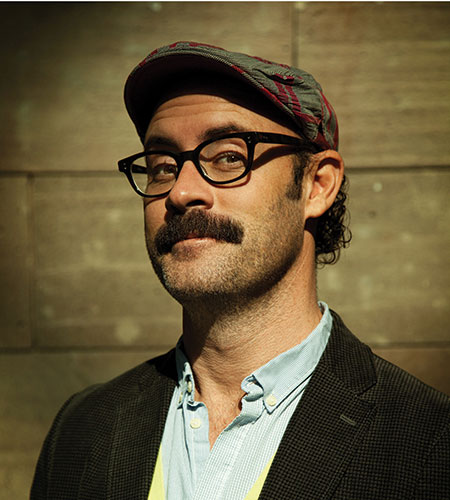 “It’s just me with a fistful of jokes trying to interact with a live animated talking meat tray. It’s really difficult. Just when I think I’ve delivered a relatable mainstream show, I’m talking to a meat tray. “He was originally going to be a puppet meat tray, but puppets are like one up from jugglers on the entertainment scale, and that’s still two above comedians.”

For followers of Simmons, it should come as no surprise that a meat tray takes centre stage in Trivia, continuing a recurring body-food interest that has seen the comic take that which most others would generally eat and apply it in some way or another to himself (in this show, it’s slices of ham to the face). 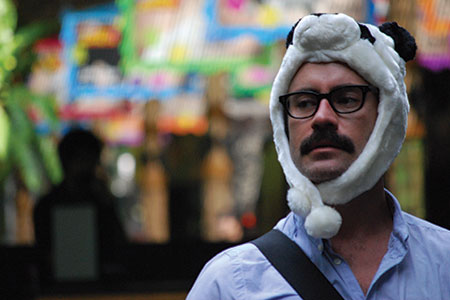 “What I do is different and not really comparable to other stuff going on,” he told us in 2011 of his Fringe-nommed show and of his take on comedy in general.

“I have worked hard to do that, I don’t want to be straight stand-up. I want to do something innovative,” he said. Simmons came to the stage, he says, after “years of fucking around on Triple J where I realised I had written hours’ worth of jokes that were instantly disposed of on radio – I thought they deserved to live within a live show.”

Where other comedians will take on audiences armed with just a mic and their brand of observational humour, Simmons’ shows are riotous full-throttle prop-laden chaos.

Written from the finale backwards, Meanwhile had Sam smashing tacos into his torso, and About The Weather’s conclusion featured the show’s signature ‘waving hello’ cats and Simmons attempting to put together an IKEA flatpack live on the stage … obviously.

“The finale [of Trivia] is ridiculous,” Simmons says of the initial idea that sparked the creation of this year’s show.

“It’s like a retarded murder mystery in a wheelie bin.” All we can say is, well of course it is. 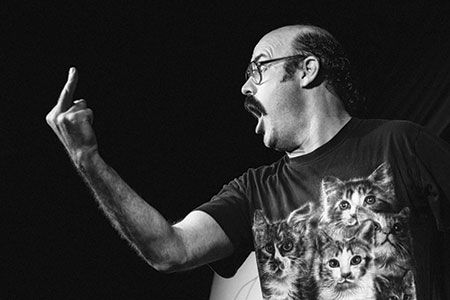 Ahead of his forthcoming London residency Simmons embarked on a tour of the US and Canada, where he smashed it out of the park as the closing act at Sarah Silverman’s Comedy Gala in Montreal alongside Canadian Graham Clark, San Franciscan Emily Heller and Philadelphian Todd Glass. The gigs in the land of the free, though, have proved particularly revelatory for Simmons.

“It’s kind of incredible,” he says of his recent shows in America. “I think the States is where I will most likely ‘break through’. They are so into it, it’s been mind blowing – I couldn’t be happier.

“In Australia, I’m a weirdo,” he adds. “In the UK, I’m a colonist ‘trying’ to be absurd and emulate the Brits, but in the States I am just me. I know that sounds kinda negative, but they don’t have a cultural cringe or a sporting rivalry – they just enjoy who you are.”

Trivia, which Simmons took to the Adelaide Fringe this year, follows Simmons’ first TV show, Problems, which aired on the ABC in November. The mash-up of sketch comedy and sitcom was shot through with Simmons’ frenetic take on the world – he plays Sam alongside his pet cat Mr Meowgi, which is in fact Ronny Chieng in a cat suit – as they try to solve a suburban problem in each of the four episodes. 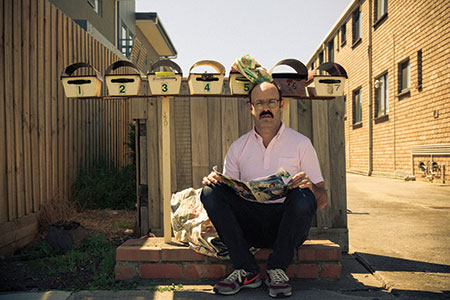 “ABC wanted to commission a sketch show,” he says. But, as you can imagine, in Simmons’ hands, Problems is far from your average sketch comedy.

“I think sketch kinda sucks,” he says, “but we pitched it anyway, and won. Then Declan Faye (head writer) and I wrote like maniacs during Edinburgh 2012 in a shared house with a faux goth, a Nineties shock ‘I’m gay! Can you deal with it?!’ guy and a chiselled Aussie with a six-pack so hard you could scrub virgin sheets on it.

“We fought each other and survived extreme jet lag to make something that ‘resembled’ a sketch show yet remained true to our comedy morals, and what we came up with was one of the weirdest, most unique things to screen on Oz telly in years.

“I’m incredibly proud of it and my punk cast of soon-to-be-superstars [which includes Claudia O’Doherty, Chieng and David Quirk]. I reckon one day people will look back on Problems and go, ‘Oh shit, that was really amazing.’”

In our humble opinion, it is, and so is Simmons. If you’ve not caught him yet then don’t miss out this time as his mission to bring a little – or rather, a whole heap – of silliness to our lives continues.

Interview: Andy Zaltzman on pasties, cuts and his predictions for the Olympics