TNT caught up with Grinderman to chat about their stunning new album.

If ever a band had earned the right to rest on their considerable laurels, then Nick Cave and The Bad Seeds were it.

In 2004 they released Lyre of Orpheus/Abattoir Blues with many critics calling it their best yet. But when Cave, and core members Warren Ellis, Martyn Casey and Jim Sclavunos regrouped in 2007 it was not to make another Bad Seeds album of carefully crafted ballads as expected. Rather, Cave picked up a guitar for the first time, the quartet hit the studio for a week of spontaneous improvisation – and all hell broke loose.

Grinderman was born in a crossfire hurricane of squalling guitars and X-rated lyricism and overgrown facial hair. But no one was more surprised than Grinderman themselves. 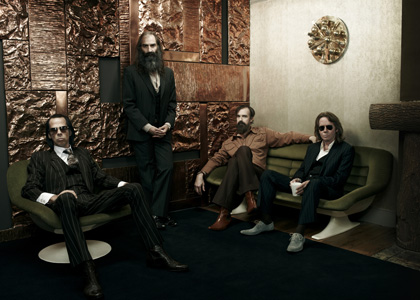 ‘Some sort of band’

”Grinderman is sort of a chaotic disturbance in that world – it’s an unexpected development and introduces an element of pure chaos,” drawls Sclavunos in his New York accent.

Cave saunters in (“Has the interview started?”) eating custard cream ice-cream. The Fu Manchu moustache he sported for Grinderman’s self-titled debut is gone. He looks buff and healthy.

“There’s definitely a lingering resonance of the thing that’s gone before,” says Sclavunos. “It’s opened some new door or pandora’s box of possibilities.”

But both are at pains to point out that Grinderman is an “an autonomous thing” and certainly not just a side-project.

Grinderman’s arrival caused confusion all round, not least for their label Mute. “No-one knew if this was really going to be more,” says Cave. ”Now it appears that we’ve turned into some sort of band.”

As ever, Cave can’t help being a smart-arse – when asked about reports that he is writing the screenplay for a remake of The Crow he says mock-sharply: 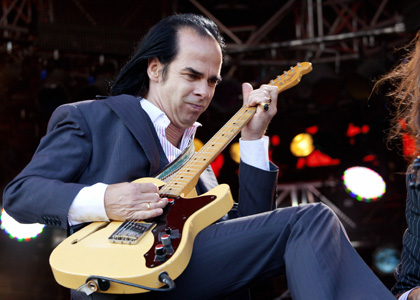 Back with a vengeance

Ok, then. Grinderman 2 is a concept album built around a loose narrative which will be revealed, drip-feed style, via videos and album artwork.

Songs like Worm Tamer and Heathen Child are classic Grinderman, all furious mayhem and sexual menace. But Palaces Of Montezuma seems to recall The Bad Seeds’ lush balladry.

Cave adds: “It served as some kind of relief from the onslaught. The Bad Seeds have always had a problem with pop stuff anyway. And whenever we tried to do something good natured and fun to listen to the saboteurs in us would kick in and it would turn into an unlistenable fiasco … within Grinderman, there is, despite what people think, a kind of much more tempering down of irony within the music. There is just a real love of rock and roll.”

Though he’s lived in Brighton for donkey’s, Cave is considered a legend in his birth country and in 2007 was inducted into the Aria Hall of Fame.

“I’m in with good company,” he says “Marcia Hines, AC/DC … So you know you can kind of sneer at these things but I think there’s a lot of great stuff to come out of Australia – it’s not like the hall of fame is just full of shit – just half full of shit.”

The conversation turns to pop music.

“I’ve got Kylie’s Mighty Aphrodite but I haven’t listened to it yet,” Cave says.

Will he and Kylie ever perform a duet again? “I’d love to – maybe a Wild Roses Grow redux,” Cave chuckles.

“Except that would be a bit like when Russell Crowe rang me and said: ‘Could you write Gladiator 2?’ And I was like:  ‘Doesn’t he die in the end?’ and he goes: ‘Yes. Sort that out!’”

“I dunno if that would happen but, I love Kylie,” he says softly, almost to himself, before adding suddenly: “We’re actually friends.”

Does he see her much?

“Not a lot – we text … I’ve never seen anyone text with as many exclamation marks!”

Interview: Joe Satriani on stupid band names and how Hendrix changed his life