Rain. Damn. A less intrepid group of would-be mountain bikers might be put off by the wet conditions but we simply don our wet weather gear and gather at the suggestively named bike rental shop F***. We’re told it stands for “free” – who knew that was considered such a dirty word in Switzerland?!

Our no-nonsense guide Curdin Bundi matches us each with a bike and we’re off to explore this little corner of Switzerland’s most easternmost canton, Graubunden.

The rain is really hammering down as we cycle out from our base, the ultra modern Rocks Resort. Situated in the town of Laax, in the region of Flims it styles itself as a “cutting edge” mountain resort. The night before its unfortunately named “Crap Bar” gave us the giggles but the staff assured us that crap is the native Romansch word for rock, which seems to be a theme around here (rocks that is, not crap).

And not surprising, really. As long as 10,000 years ago, the mighty Flims rockslide gouged out the amazing, rugged landscape we are hurtling through now.

Most of our group are experienced road cyclists but have little experience mountain biking so the bikes we are riding, with their bouncy suspension, are something of a novelty. Two less- experienced cyclists in our party have been given Flyer Electro Bikes – cycles with little motors that kick in when the rider needs extra juice to get up the hills. And there are surplus of those.

There’s a lot of gear crunching before some of us (ok, me) get the knack of climbing and descending hills. It can be quite hard on the old legs but is fantastic exercise. Who needs a wussy electro flyer anyway?

Swimming in the rain

With more than 330kms of marked biking trails in the area there’s a huge choice of routes including the advanced Vorab route which climbs 2600m into the mountains and is Curdin’s favourite.

“You have to be in good condition, but you get wonderful views,” he tells us.

Happily, our route is a little more sedate and leads us to the beautiful azure Lake Cuama. “We have three lakes, all of which have mineral water so you can drink while you swim,” one of the F*** staffers tells us. 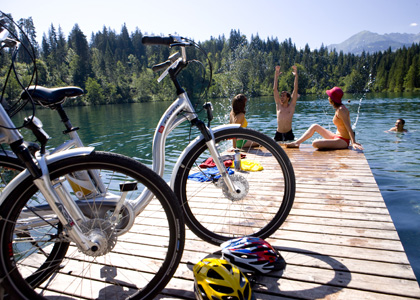 Despite the rain and the near-rumble of thunder some loons feel the need to test this out. “It’s warmer in the water than it is outside!” they report post-dip. After all that, none of them even bothered to taste the water, but one “drank some through my nose I think”. Lovely.

Back in the saddle and some of us are feeling a little cold and damp. But it won’t be long before those hills warm us up again.

After a solid afternoon of peddling, we are in desperate need of some fuel so our guide leads us to Restaurant Conn to sample some alpine cuisine. We’re expecting a rustic little cafe but this is a classy establishment, serving the kind of gourmet fare you’d find in a Michelin-starred restaurant.

We try a melon salad with sheep’s cheese followed by local specialty Trinser Birnenravioli, a pasta filled with pear and cinnamon. The Ibex and stag on the walls are not just for show – the owner hunts them and serves them in the restaurant. You can wash it all down with a nice shot of schnapps – the Swiss farmers apparently used to have a shot to warm themselves up before heading out to work in the fields. 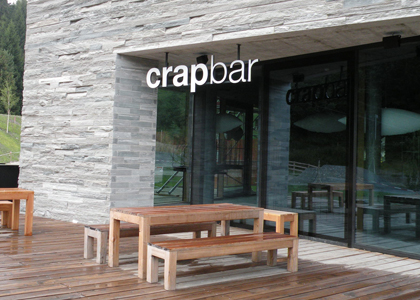 WHEN TO GO: For activities such as mountain biking, hiking and whitewater rafting summer is the optimum time. During winter Flims is a ski resort.
GETTING THERE: Swissair (swiss.com) flies direct to Zurich from London City Airport with return tickets starting at £113. Trains from Zurich HB to Chur take approximately one hour and 15 mins. Buses from Chur HB to Laax Murschteg take 30 mins.
GETTING AROUND: The Swiss public transport network is as extensive as it is efficient.
VISAS: Australians and Kiwis don’t need a holiday visa but South Africans require a Schengan visa.
CURRENCY: 1 GBP = 1.654 CHF
LANGUAGE: Swiss German, Romansh and Italian are the official languages here but English is also widely spoken.
GOING OUT: A beer costs about 9 CHF.
ACCOMMODATION: rocksresort.com has a selection of apartments for rent.
GET MORE INFO: flims.com

25 habits every British tourist is guilty of

A perspective on the berlin wall