Horror flick The Victim was your directorial debut – what prompted the move behind the camera?

I was inspired by Robert Rodriguez when I worked with him on Grindhouse. I loved his attitude of, “Go and do it! You can do it.”

He and Quentin Tarantino tried to give us the experience of what it was like to go to a double feature back in the Sixties, which was something we had all enjoyed as young men. Also, though, my resources fit perfectly for the budget I was given.

Tell us about working with your wife, Jennifer Blanc, on the film.

She’s a great actress and a hard worker. We had worked on other projects together before but this was different as we both did so much on this one, not just acting. And we’re very passionate and intense people, too, so that was all part of it.

What sort of director are you?

A crazy, intense director. I thought I might be mellow, but that is not the word. I’m more like a drill sergeant mixed with a screaming maniac!

You were co-director of The Blood Bond, your debut behind the camera – what did you bring to that film?

Well, I was involved but I never got to really make that movie – I started it, they finished it. The Victim, though, is mine until the end.

Last year’s apocalyptic The Divide, which you starred in, was brutal. Does director Xavier Gens run a relaxed set?

No, it wasn’t a relaxed set at all. It was one of the most unrelaxed sets I’ve ever been on! But Jen and I love Xavier and his work – he’s a true talent.

You’re producing four films at the moment. Is this where your future lies?

Yes. I am an actor and always will be. I just started an MMA film called Tapped [directed by Allan Ungar] in which I am just acting, but we want to keep producing and making movies.

And to continue working with Jennifer – we’ve got [ensemble thriller] Treachery in post-production right now.

Which performance out of all your 80-plus roles are you most proud of?

The Terminator [in which he played Kyle Reese].

Did you know at the time that it would be such a groundbreaking movie?

No, I had no idea. I knew Jim [Oscar-winning director James Cameron] was a huge talent, but I didn’t know what that movie would become. 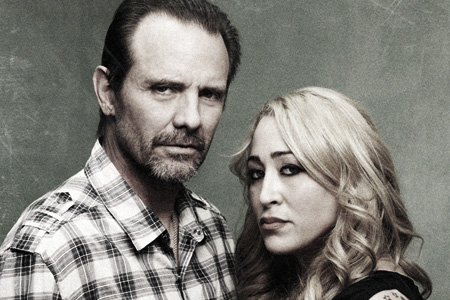 Was it the most memorable to work on?

You said that Rodriguez inspired you to become a director, but you’ve also said you’d take a bullet for Cameron – what were your first impressions of him?

He impressed me right from the very beginning of production on The Terminator. He is a very talented guy, very smart and also just a lot of fun to work with.

He has a reputation for being a hard taskmaster on set…

Yeah, but I’ve never had that experience with Jim. He’s always been amazing to work with.

Was it frustrating that your role in Terminator 2: Judgement Day was cut?

It was in there until the very last moment! I wish it was in there for my residuals, of course, but I understood they had to support the story.

Have you and Cameron ever been close to working together again?

We have been very close to it on a few different occasions, yeah.

Was Avatar ever on the cards, then?

I was close to doing it. I waited 10 months to hear about a role before I found out it was going to Stephen Lang, and I have not heard any word about sequels or prequels. Of course I would love that, but we haven’t discussed it.

What has been the biggest regret of your career?

There are a few decisions and movies I wished I’d done. Eight Men Out [1998 baseball movie about the Boston Red Sox match-fixing scandal of 1919] was a mistake not to do, and Internal Affairs [Mike Figgis’ 1990 LA crime thriller] was another one I should have accepted.

Your first role involved you getting punched by John Travolta in Grease – did you look to continue in musicals?