How long have you been DJing for?
Quite a few years actually, the first gig I think I did in 2007, so it’s been quite a while now.

Had you been involved in music before then?
Yes, I’m actually a classically trained cellist and I was at the Conservatorium high school and then I went over to Europe for a year after that to continue studying, so yes.

I read somewhere that you also used to play bass in a band, is this true?
Yeah that’s true. A couple of bands I think.

How does a classically trained cellist get into DJing?
I love every kind of music and I was never really a person who was inclined to just one genre or style. When I came back too Australia I was hanging around clubs anyway because of the bands I was in and started doing it a bit casually for fun. Then one day I figured I really liked it and that I have a really strange work ethic with something that I love. So I sat in a room for a number of months and practiced. I really wanted to be able to play all the songs that I love and put them together coherently.

How do you go about putting together a set for a show?
Look, to be honest I just get to know every song that I have in my library, nothing is really that planned when I play and I just kind of vibe off the crowd. So that’s how I tend to put sets together.

Are you one of those purist DJs who only use vinyl?
No, I don’t. Although I don’t use a computer either, so everything I do is live.

Favourite place that you’ve been to on your recent travels?
I loved New York. I loved playing in New York. I was only supposed to play for an hour at this little, literally underground club and I ended up playing for like four hours. Everyone was very open minded and you could just play whatever you wanted and there’s no one giving you weird looks. You could just take everyone on a journey and they wanted to go on a journey with you. So yeah, I loved New York.

Any tips for surviving all the flying?
Yes. Okay, make-up – even if you’re a dude, it is a saviour because if you’re travelling heaps, you start to feel really unfresh. Drink lots of water, keep yourself warm on the flight, watch as many movies as you can and here’s a tip that not many people know about, I’m not even vegetarian but I always order the vegetarian meal on flights because you come out feeling less ill. I always feel better if I eat the vegetarian meal. Plus your food comes out first.

Really? I usually avoid the meal entirely
No! You know how they usually serve you that really weird meat? I always feel a lot cleaner if I’ve eaten vegetarian, they tend to put in quite healthy food and simple ingredients.

Do you have any plans for making music outside of your DJing?
I actually produce. I do a lot of writing and producing, which keeps me busy during the day. And they’re two very different things. Like when I’m writing I find I need to feel selfish to do it, yet when you’re on stage you can’t be selfish at all. So yeah I find it quite hard sometimes to switch between the two, it takes some talent.

Do you produce for other bands and musicians?
No, at the moment I’m producing for myself. I’m kind of writing my own album in my bedroom.

Oh, cool. When will that be ready?
We’re working that out now. I’m just finishing a few things off, but yeah I’m excited.

How was playing the Grammy’s after party?
Yeah and the Brit Awards’ after party. They were really different but I loved the Grammy’s, because ever since I was a little kid I’ve watched the Grammy’s so it was a really crazy thing for me. That really struck a chord with me. It was like I thought it was going to be. I kind of had my head down because I was DJing, I didn’t really walk around looking for stars but Katy Perry came up to me a few times, which was wild.

Interview: Simon Jones of The Holidays 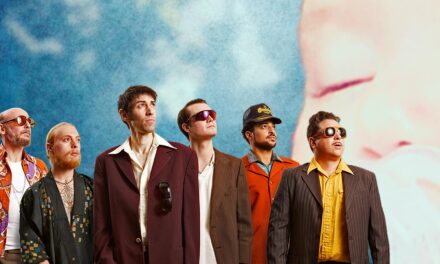