You’ve just played the Olympics closing concert in Hyde Park, how did it feel?

It was great to be back in the UK, and amazing to be involved in the concert. We were watching the Games on TV and cheering on Team GB.

What was the reaction in the US to the Games, everyone went mad for it over here?

Yeah, we heard. I am a little sad that I wasn’t here to experience it. In the States, though, they only really cover sports that they’re good at, so they show a lot of obscure sports we probably wouldn’t here.

How was the tour of the States?

We came back from Salt Lake City last week – the show was great, but I am not sure that I would go back there as a tourist. It is far smaller city, and there’s far less to do there than in other places. But everyone was lovely, and the crowd was great. I would love to go back there and play another show.

What were highlights of the tour?

We pretty much went from east coast to west coast, and we played Lollapalooza for the first time, which was absolutely incredible, as it is one of the most famous festivals in the world.

Do you prefer festival shows like that or your own headline gigs?

You’ve always got to work hard at festivals, as it is not your crowd. You’re playing to people who don’t know your music and trying to convert them, which I love doing.

What’ve been your favourite festivals?

I like festivals that have other stuff going on as much as the music, like Latitude and Glastonbury and the Secret Garden Party, where there are smaller events, or crafts and theatre and poetry readings, things you can go to between bands.

Every year that we play Glastonbury, the band, crew and manager set up our own little campsite and stay there for the whole weekend, as well as playing the gig. But it’s probably quite detrimental to our own show.

What festivals have surprised you?

There is one in Montreal called Osheaga, which is amazing, it had a great line-up and vibe. And the catering backstage was the best I’d had anywhere.

There’s this show in America, The Iron Chef and they had the guy who won in action. When we were there, we had some poutine, too, which is Montreal’s traditional dish.

It’s cheese, gravy and chips, but it is disgusting. It sounds like their ‘drunk food’, but people are very proud of their poutine. 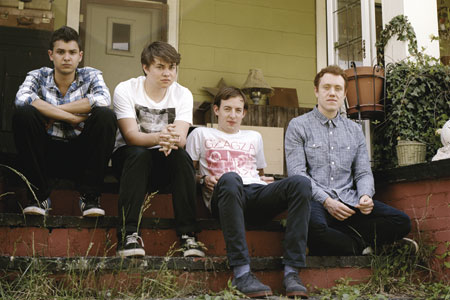 What’s you oddest moment on stage?

In Ibiza two years ago, they were filming a reality show for Playboy. All these playboy bunnies came onstage and danced with us which was pretty cool, and pretty intimidating!

We toured Australia with Elbow about three or four months ago and they are among the loveliest bunch of people you could even meet. It is like watching a masterclass on how to work up an audience and hold them there.

Did you pick up any tips?

So much of what [Elbow frontman] Guy Garvey does on stage comes naturally to him, the way he talks to the crowd, all the banter, I don’t think I could ever do that.

Frontman for your fantasy supergroup …?

Yeah, Guy Garvey would be the front man, purely for his stage banter and his general loveliness as a person. And then Dave Grohl on guitar because he seems like the friendliest person, or should you have him on drums? And the Macabees, too. That would be my supergroup for friendliness.

Reading Festival boss Melvin Benn said you’re a ‘future headliner’. Does this put pressure on you?

That was a nice thing for him to say. With regard our albums, we don’t feel much pressure; we have just always made the music we wanted to, the way we wanted, and it has worked out incredibly well.

Our second record was an acoustic curveball, as far away from our first as you could get. No one knew what we were doing, but that’s given us freedom.

How’s the new album coming along?

We don’t really set out to do something in particular, we just allow the songs to come, but so far it feels like a progression. There’s a lot of electronic samples and loop-based stuff, which, again, is kind of different to what we have done before as well.