Not just because of its eye-catching focus on the male appendage and our attitudes towards it, not just because it was unanimously described as ace by all who saw it (though all of this is true by the way), but because the brains behind the Fringe programme deemed it an offensive title and promptly attacked it with an asterisk to defend our outrage.

“It was a worrying development for an arts festival to start censoring what it thinks is ‘too rude’,” Herring tells us ahead of taking this re-tooled version of his 2002 show of the same name across the country on tour.

“I did [the show] there 10 years ago and there was no problem at all.

“And it has a double meaning, of course, it comes from talking cock and bull – which means to talk rubbish – but by censoring it they were making it mean only the rude thing. You can say much more offensive things in a sentence without having a swear word. It is ideas that are offensive, not words.”

The puerile and the pensive, the childish and the mature – Herring’s combination of the two tells us much about a comedian who is all about finding the funny in the serious, who is as adept with a knob gag as he is with taking on fascism or, as in the case of his latest stage performance, performing a dissection of masculinity and what men and women really think of each other, but wrapping it all up in a masquerade of dick jokes.

“When I first came up with the show it was a response to The Vagina Monologues [the hit stage show which has played around the world since 1996],” Herring recalls.

“When that came out it felt like it was in isolation, ‘All men are bastards’, that kind of thing. I wanted to do a show about how human beings share their lives and not to make it about competition.

“Men can be arseholes, but they can have just as much pressure and expectations put upon them because of their sex, too. We all try to conform to what is expected when in fact there are bits of male and female in all of us.

“Genitals are supposed to be shared in whatever combination you want to share them, they are not an exclusive thing!”

Having scored great solo success over the past five or six years, Herring has taken this opportunity to revisit a show that means a lot to him, but also to bring it to a new audience that may have only discovered him recently. 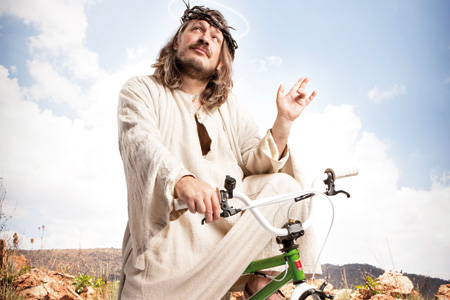 Those who aren’t familiar with him as half of a 1990s comedy creative force with Stewart Lee, whose Fist Of Fun and This Morning With Richard Not Judy TV series were landmarks in the alt-comedy scene, may have seen his Christ On A Bike or What Is Love, Anyway? shows, or read his weekly column in Metro on their morning commute.

A decade is a long time, but returning to the material after this period highlighted for Herring the many ways things have not changed at all.

“When people hear about the show they think that they know what it is going to be about – men saying they’re better than women, getting angry and being all macho and stuff,” he says.

“Men talk about their penises much too much, but it is always in a joking way and, in doing this show, I realised how insecure men actually were about this subject, which they talk about seriously so little.”

Opting to tackle a sensitive subject head on, Herring carried out an anonymous online survey asking both men and women about their relationships, sex and their opinions and admissions about the ‘spam javelin’ in particular.

What emerged, both then and now, is how the notion of a gender war is highly misinformed.

“What came out is how much women like men,” he reveals – and also how male machismo leads men not to talk about problems and concerns that will affect many of them at some point in their lives.

“I also found out that men are disgusting,” he admits, again illustrating how some things have not, and most likely never will, change. “I asked: ‘Where have you put your penis for fun?’ and the answer was pretty much everywhere and anywhere you could possibly imagine.

“A toilet roll full of jelly, a hollowed-out cucumber, the gap between the mattress and the metal frame of the bed, even. There is an inventiveness and ingenuity to it where men are trying to make, essentially, an artificial vagina.

“It has been revelatory about guys and their frustration!” 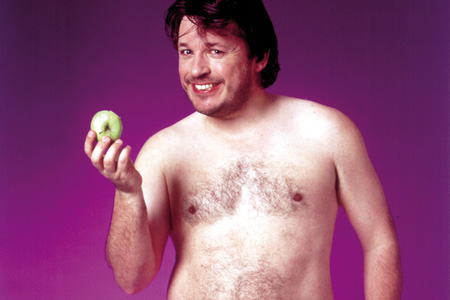 While the title of the show caused a storm in a tea cup in the Scottish capital, Herring is no stranger to causing controversy of one form or another.

Christ On A Bike, depressingly yet predictably, was picketed at several shows on its spring 2011 UK tour, Christians reacting to its perceived blaspheming, despite the protesters having likely not seen it.

“It was a bit sad more than anything else, people getting upset about a show they have only imagined in their head,” he recalls matter-of-factly of the placard-wavers.

“I like to tackle big subjects and some people think you shouldn’t be joking about these things. But there is humour in all subjects and a way of approaching topics to make you think about issues.

“Some Christians thought a show [of that title] by an atheist was anti-Jesus or anti-Christian, when it was not – it was my own personal journey having been brought up Christian and then turning away from it.”

Moreover, as much as his Christ show was driven by a self-confessed obsession with Jesus, it was as much by his passion for questioning authority and challenging rules.

“I like to question and point out hypocrisy, my own especially,” he says. 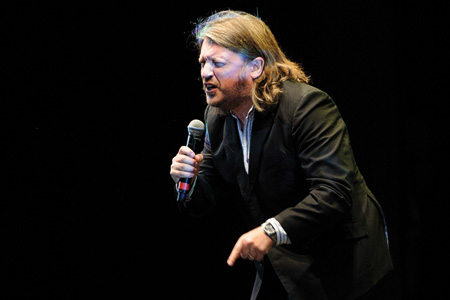 “Because if something is true then it will stand up to questioning. If people say you mustn’t question something, then you are getting into dictatorial areas where people start doing crazy things like flying planes into buildings and drinking poison.”

His quest to understand, pick apart and challenge, as well as spread hilarity, has led him thus far to take on: Christianity, love (told from the point of view of a long-time singleton who had recently tied the knot), as well as fascism (Hitler Moustache, in which he attempted to re-appropriate the pencil ’tache ruined for evermore by the angsty Austrian). And now, of course, masculinity and men’s genitals.

“People think that if you are doing comedy about something then you are making light of it, ” he says. “But that is not necessarily the case.”

This is how he manages to combine serious topics with wilful gutter filth, and it is how he can take an audience-wowing show that on the surface appears to be about mouthy misogyny and knob gags but manages to send you home sore from laughing, and also thinking about your relationship with both your little fella and your significant other.

He’ll also teach you a few new euphemisms, too.

Interview: Charlie Brooker on the terror of live TV and his recent trip to Australia’s southern coast