High-flying job: Work as a flight attendant and get paid to see the world

There could be another way. You could get paid to travel as a flight attendant.

Historically, working on planes has always been an ultra-glamorous career, with beautiful air hostesses and dashing pilots caring for their courteous, affluent guests.

These days, however, budget airlines, overloaded airports and reports of rude customers have warped this perception. Is being a flight attendant still worth it?

We quiz three London-based flight attendants to find out…

Au-Yeung has been serving passengers on board aircrafts for 11 years. She has always had a desire to travel, which is what first attracted her to this career.

“I wanted to see the world with new groups of people and expand my horizons,” she says.

The British Airways steward explains that it’s a great career for people who don’t like run-of-the-mill nine-to-five jobs. And while UK flight attendants can earn a salary of up to £27k per year (payscale.com), it’s not easy work.

“It can be tiring,” Au-Yeung says.

Cabin crew work unsociable hours and she admits it’s common for those in the business to miss birthdays, weddings, anniversaries and Christmas. However, for Au-Yeung the pros outweigh the cons, and she absolutely loves her job.

Working with a good team makes all the difference to her, and when she arrives in another city there’s often the opportunity to socialise with the crew.

“Depending on the length of the trip the team might try to meet up for dinner or a drink, or perhaps a bit of sightseeing,” she says.
“No two flights are ever the same. I meet new people and see new places every time.” 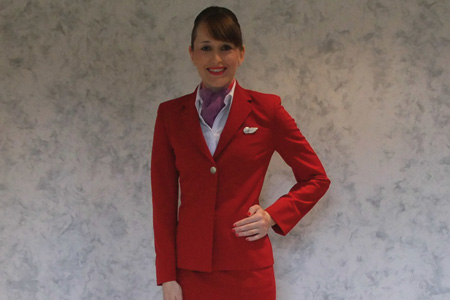 After six years on the job, Massingham has no regrets. At the age of 30 she swapped her desk job at a bank for one in the air. “It’s not just a job,” she says.

“If you enjoy working with people in a team and a customer-orientated environment then I would highly recommend it to others.”

Massingham has travelled to dozens of countries, including Canada, the Caribbean and India.

She now combines her travelling with helping local communities in the countries she lands in. “For example, when I visit Havana, Cuba, I take items to the local children’s orphanage,”she says proudly.

Airlines often have incentives and programmes that staff can get involved in. Massingham works for Virgin Atlantic, an airline that is particularly focused on charitable projects.

“I am part of Virgin Adventurers,” she explains. “Staff take part in adventures to raise money for Free the Children. I’ve already climbed Mount Fuji in Japan and next I will be cycling the Rift Valley in Kenya.”

When Massingham’s not helping others, she’s making the most of her job. “I’ve skydived in Las Vegas and been cage diving with great white sharks in Cape Town,” she says excitedly. And there’s more to come. 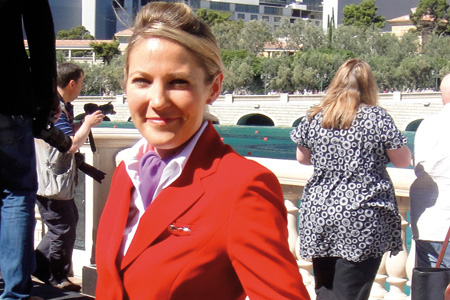 Despite studying law and training as a barrister, Hutcheson found she didn’t have the funds to travel, let alone travel the way she liked to.

“I was never the backpacking type and the thought of throwing a bikini and a pair of flip-flops into a rucksack and heading to a hostel filled me with dread,” she says.

With her student loans looming, she decided that being cabin crew would allow her to “see the world in style, stay in nice hotels and get paid for it.”

After 13 years, Hutcheson is still flying around the world enjoying the perks of the job.

“We get a minimum of 24 hours in a destination and up to three or four clear days. We organise activities such as catamaran trips in the Caribbean, cycling across the Golden Gate Bridge in San Francisco, climbing Sydney Harbour Bridge or just a shopping trip to a nearby mall,” she says.

The working schedules vary from airline to airline, but in the worst cases crew can spend up to 50 hours a month in airports waiting for flights (unpaid), and another 65 hours on shift. However, Hutcheson says her company, Virgin Atlantic, only expects five or six flights per month from its crew, and also gives them plenty of time to recover at each destination.

“It varies between a one and four-night stopover. Or seven nights away, if you are doing really long routes,” she explains. For this flight attendant being part of Virgin Atlantic crew isn’t just a job, it’s “a lifestyle choice”.

Get into the air

To be cabin crew for an airline there are height restrictions – you have to be above 5ft 2in and below 6ft 2in. Most airlines require four GCSEs, including English and maths.

If you speak another language as well as English, you’ll increase your chances of being selected for the crew.

Future of The Simpsons in jeopardy over pay row + VIDEO