What’s the series about?

The scale of what humans have been able to achieve in engineering – looking at the biggest engineering projects on the planet.

The first episode’s about cities and buildings; the second is about how we move things around the world; and the third is about food and fuel.

Have we mastered our environment?

As human beings, we’ve become a force of nature in our own right.

We now have the technology to build aqueducts that stretch the entire length of China and we can build cities a kilometre high.

And we’ve done this in the blink of an eye, the last 100 years, and radically transformed the planet in ways our ancestors would have been unable to comprehend.

What was the most daunting project you visited?

The Burj Khalifa [in Dubai]. The tallest building for 4000 years was the Pyramid of Giza. It was just a big pile or rock and had no internal space.

In the Middle Ages these great cathedrals went up and then steel, glass and concrete transformed building. In my lifetime the height record has changed five times.

What goes through your mind there?

Don’t fall off! The deserts of Dubai get very windy and it blows a hooly up there.

What’s the next development to change the height buildings can reach?

It will probably be elevator technology, as that limits you. Now they’re planning the Kingdom Tower in Saudi Arabia, which will be even higher.

Does ambition or function drive it?

Both – social, technological, economic and political factors. In my lifetime the population has doubled, which is ridiculous, so we have a need for our technology to work, to feed and move all these people around.

What has surprised you the most?

The sheer scale. As well as the Burj, we visited a Boeing factory in Seattle, where they’re building the Dreamliners [world’s largest jumbo jets], and the world’s biggest container vessel.

We were in the Gulf of Mexico standing on this ship that sinks itself, then goes underwater and picks up an oil rig. We were standing on deck and it just defies imagination. 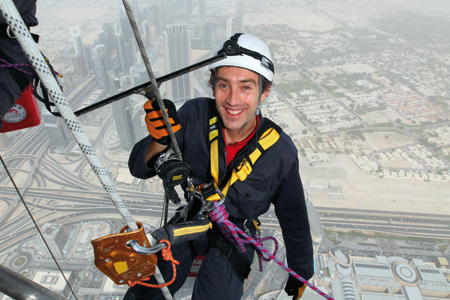 And what has been the weirdest?

For part of the story about food and fuel we went to Japan, where there’s an island off the coast of Nagasaki, called Hashima Island.

It was 400m long and 100m wide and was a coal mining colony. At one time it was the most densely populated piece of land on Earth.

Is it still used?

Within a few months of closing in 1944 it became derelict – the coal mining had stopped.

Everyone left and time has taken over. You walk around and there are tables and clothes left – it’s a proper ghost town frozen in time.

It’s where they filmed Javier Bardem’s villain’s lair in Skyfall. Few people are allowed there, but we were.

I was out in Kazakhstan getting permission to visit the Baikonour Cosmodrome for a Soyuz [rocket] launch to the International Space Station.

It’s funny as it’s the only ‘bus stop’ to the ISS, so all the American astronauts fly from the same place from where [first man in space] Yuri Gagarin left.

We were lucky to film there. And it’s not like a shuttle launch where you’re seven miles away, we were less than a mile from lift off. It is like the sky’s being ripped apart.

Was filming always this glamorous?

No. One of the issues in Mexico City is it has a bad subsidence problem so it is hard to drain away the sewage, so I went ‘shit diving’ in raw sewage – human waste, animal waste, hospital waste, industrial waste – in just an industrial diving suit, with tape round the gloves.

The invention of flight, which we’ve only had since the Wright Brothers in 1902. Now nowhere is more than 48 hours away.

The world has shrunk! And the evolution of the megacity with populations more than 20 million, but that brings problems as much as opportunities.

Do you touch on environmental issues?

It’s not really our story, we’re a snapshot of the world as it is. But we are rightly asking questions we wouldn’t have 20 years ago. The world’s a closed system, there is nothing coming out or in, so all the things we do affect all these systems.

Supersized Earth is on November 28 and December 5. 8pm. BBC One and on BBC iPlayer

Interview with Andrew Wyatt, frontman of Miike Snow, on his new solo album