How did the idea of you and Aidan Roberts recreating Mike Oldfield’s seminal Tubular Bells record on stage come about?

It was really just an accident. Aidan and I were playing along with some guitars to some records one night over a bottle of wine, and gradually it turned into what it is now. We thought it would be a good idea to learn to play the whole record on two guitars, not to perform it, though, but for the fun of it – something to do during the week.

At what point did you realise it could become something more?

When we bought a loop pedal. We realised that during the finale on Side One you could loop the bass line and then go from one instrument to another – the grand piano, reed pipe organ, glockenspiel and then the bass guitar. We started adding more and more instruments until before we knew it we had a whole house full of them.

Were you big fans of Oldfield’s going in to this project?

It is strange, we are not a tribute act and we are not the biggest Mike Oldfield fans in the world, either. It happened to be a record we were listening to one night that has taken us on this journey. Normally back home we are playing our own music in our own bands and composing for film, TV and theatre. But this little idea that sparked that night has taken off.

How did the first show come about?

First we thought about playing at a local pub, but friends of ours run a cabaret room [The Clarendon in Katoomba, NSW] and they gave us a night. We said, “It’s a strange idea, we promise to bring 20 or 30 friends and family along.” We thought that would be the end of it. But we arrived at the venue and it had sold out, so we did it again and again. 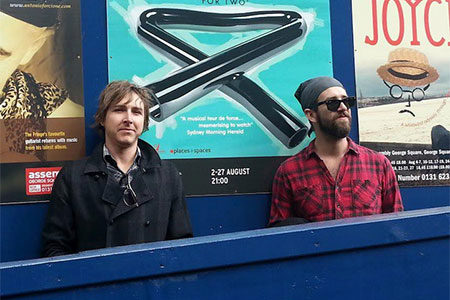 Rehearsals must have been tough…

Yeah. It took about nine months before that first show. We had to figure out how to piece the puzzle together. Who has a spare hand at one point. And it is still changing. We always want to make it better. We made a DVD of the show at the Sydney Festival last year. At that point we thought it was as good as it could get, but I have looked back and watched it and it is quite awful. We have made it so much better! I can hear that there are other layers we wanted in there that we now have.

Of course. We aren’t a covers group – the show has taken on a life of its own. We have put so much work into getting the show to where it now is.

What is it like being out on the road for so long?

It’s the longest tour I have ever done – it is a fitness regime being out on tour for five months. We are going to go home pretty buff!

Do you get quite diverse audiences?

The show went down well at [Edinburgh] Fringe to mixed audiences. We get those who grew up with the record and know every Mike Oldfield album, but also people who don’t even know who Mike Oldfield is.

Who do you think best ‘gets’ the show?

In one way the show is aimed at them [the Oldfield fans], but we aren’t an Oldfield tribute band. You get all levels of appreciation. Some are there for the music, some for the theatrical spectacle – and then some girlfriends who got dragged along but end up having a great time anyway and wanting to buy the DVD.

What has been the best show?

The Union Chapel for the 40th anniversary of the LP’s release. We had a lot of Mike Oldfield Fan Club people there.

Yeah, they know it really well, but they loved the show. We’re in touch with a lot of them regularly. Some of them think the show will be terrible but they want to know what it is about.

Very. Some people come in thinking we are taking the piss, so they get quite defensive but then they realise how much respect we give it. Many say that we perform it closer to how Mike Oldfield performs it, as he changes it all the time and rarely plays it now anyway.

What are your goals for the project?

Our long term goal is to play it exactly how it is in the record – if we can do that on stage then we will probably just hang up our boots and go and do something else for a while!