Interview – Foals: The indie-rockers are on fire and set to light up festival stages this summer

So far, 2013 has been a big year for Foals. The indie-rockers started with chart-smashing new album, Holy Fire, and a sell-out UK tour.

With a shedload of festival shows lined up for the summer, including Reading and Leeds’ main stage as well as a headline slot at Latitude, this year is just going to get even bigger for the Oxford five-piece. And it’s all down to their devotion to bucking expectations, frontman Yannis Philippakis tells us ahead of their summer of full-on festival action.

“Our bull-headed stubbornness is an intrinsic part of what makes this band what it is,” the singer-guitarist says of the drive and determination that’s seen them climb the ladder to headliner status in a mere eight years. “We are sensitive to [Foals] being something we can take pride in. It has to be like that or we wouldn’t want to do it.”

Their ‘stubbornness’, as Philippakis puts it, has paid off in spades. Last November, lead single Inhaler hit, its humongous riffs and feral energy heralding the return of a band who’d been out of the limelight since touring for the previous LP, Total Life Forever, came to a close 18 months prior.

“We had no idea how it would go down,” he says modestly of the single that slayed all in its path.

“We thought it was quite a risky song, in a way. We like the first single to be the track that’s the most exciting to us and is the furthest from what has come before. Inhaler was a bit of a curveball – it had a visceral energy to it that excited us and if we are excited about something we have faith that others will like it.” 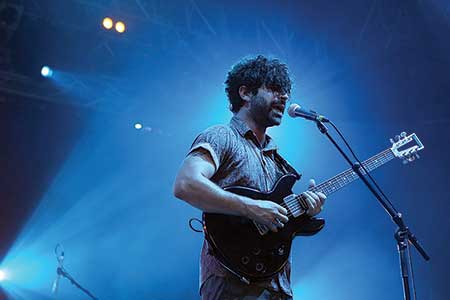 Others certainly did. The single won Song Of The Year at the NME Awards back in February, a night that was “pretty debauched,” Philippakis recalls. “I talked to Liam Gallagher and saw [Rolling Stone] Ronnie Wood’s chin. And I complimented Johnny Marr on his hair – and his guitar playing.”

Holy Fire landed the same month, hitting number two in the UK album charts, and topping the charts Down Under. They played the Big Day Out, gigged in the States and rocked a sell-out UK tour that included the prestigious Royal Albert Hall – not once, but twice, in the same day.

But if you missed these going-down-in-history shows, all is not lost. They’ll be tearing up a field somewhere near you this summer as part of a festival schedule that takes them everywhere from Lollapalooza in Chicago to Scotland’s annual party-piss-up T In The Park.

Foals are known for delivering an explosive stage show, and that won’t change in a festival setting.“We play every show like it is our last so that won’t be any different,” Philippakis tells us. 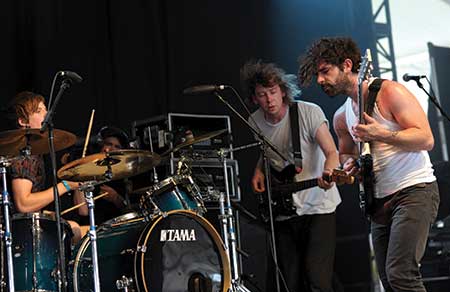 “We put a lot of attention into every aspect of the band, from the visuals to the live show,” he adds of what exactly he and the boys put together for the Holy Fire shows thus far, and will be taking out on the road this summer.

“We had an active hand in how the lighting comes together, and we’ve been working with [award-winning concert lighting designer] Davy Sherwin for some time as well as [multi-discipline creative group] Marshmallow Laser Feast. We know aesthetically how we want the show to be and we have a strict idea of how we want the visual presentation to look.”

When he jokes that one of their plans for their festival shows is “more lasers!” we’re not really sure if he’s kidding or not. As well as enjoying taking their stonking new album and show around the world, Philippakis and the boys are also looking forward to the festival season as an opportunity to catch up on the bands they’ve not been able to see these last few months.

“Even if we are just there for a day we try and see some stuff,” Philippakis says of his plans to catch some of this summer’s other top acts.

“There is so much music out there that we want to try and catch up on. Touring can be an isolating experience. And it’s also nice to see friends and hang out with bands you haven’t seen for a while, and you get to see new stuff, too.” 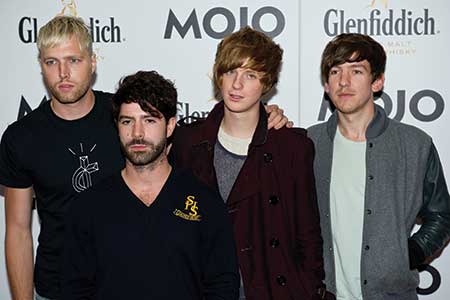 So which new acts is Philippakis most looking forward to catching at this summer’s Latitude?

Foals’ summer gets underway at the Bonnaroo Music And Arts Festival in Manchester, Tennessee, but they’ll come of age in the beautiful surrounds of the Suffolk countryside back home.

“Latitude has a great line-up and it is an honour to be at the top,” he says of their jump up to the big leagues this year. “We’re going to do a great show and blow it away!” 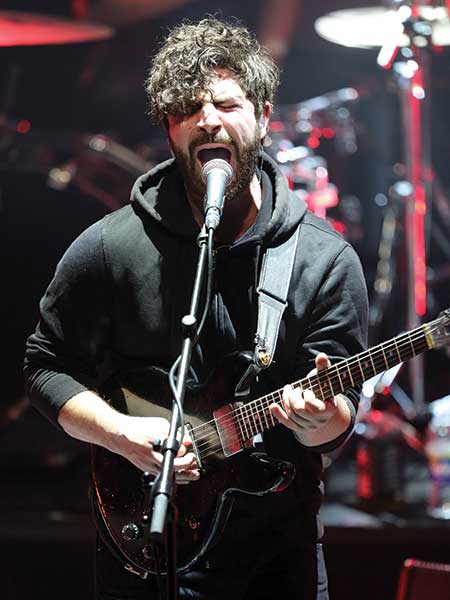 And so what about the Reading and Leeds shows they have bookending this summer of multi-fest action?

“Reading is the definitive alternative festival. There are so many legendary bands that have played and performances that have taken place there,” Philippakis tells us. He’s not wrong – the rock festival institution has seen classic shows by the likes of Nirvana, Metallica and Guns ‘N’ Roses in years gone by, to name but a few.

“Every time we’ve played it has been an incredible reception. Our favourite Foals show ever was at Reading in 2010, when we played in the John Peel Tent. That was pretty special for us.

“There is always this kind of dirty, depraved atmosphere there. It is going to be fucking awesome – loud and crazy and everything guitar music should be at a festival.” We couldn’t agree more. Bring it on!

Another Interview with The Potbelleez

Interview with The Raveonettes