Hi Jon, thanks for taking the time to speak with us! What have you been up to these past weeks?

Hi there, the last few weeks I’ve been out on the road in Australia in support of the Starlight album and just came back to London ten days ago to do some promo via BMG who are releasing the Starlight album on 15th September and also to play with Dave Stewart for his birthday show at the O2 Shepherd’s Bush Empire, which was such a blast…

‘Starlight’ comes out today (Friday 15th September) – How was it recording the album in Nashville with Dave Stewart?

It was great, although we did all the tracking in LA and mainly vocals and some extra overdubs and initial mixing in Nashville….I would fly in and out from Australia as both Dave and I had hectic schedules so we had to really juggle our calendars to get it all done . Chris Lord Algy ended up mixing the whole album. I love his work.

The album features a set of sonically varied artists – from rapper Levi Jay to Vanessa Amorosi. Did you always have these guests in mind before the album or did their inclusion come about in a more organic manner?

Their inclusions came in a very organic way. For instance, Levi Jay was at a rehearsal Dave and I were doing for the Troubadour gig in LA and we had a big jam section at the end of the song ‘All About The People’, so I said to Levi what about throwing down a rap, which Dave thought was a great idea, so Levi started free styling and just wrote it on the spot. He ended up performing it ar the Troubadour gig the next night, so we recorded him day after that.

Vanessa and I are old friends and have sung together many times and written quite a few songs together over the years. Dave suggested we try her on ‘Something Bout You’ as a duet, which I thought was a perfect idea considering the lyric content and general vibe of the song. I always love singing with her as I consider her to be one of the best singers in the world…so yes in answer to your question completely organic additions. 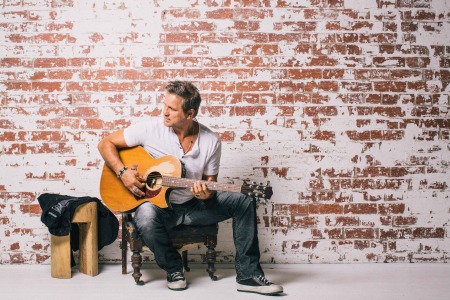 On that topic, how does it feel to be recording music with your son?!

It’s great to have him on the Starlight album and I’m certainly a proud Dad. We had worked together on my previous album called Woman on a song we wrote called ‘In Your House’, he is super talented but way more importantly a really great person. I learn off him all the time.

You’ve had a really successful career over the past 30 years – What other goals / targets do you have going forward?

At this stage I really would love to do more touring in UK & Europe and build on the release of the album and whilst it’s tough out there I hope that Starlight gets a listen at least….when your older than 25 and play and sing for real in this day and age it’s somewhat of a novelty because the new generation are not used to hearing real instruments, they are used to hearing machines and auto tune on everything and it’s all about the beat and repetitive hooks not so much songs. But that’s all cool, it doesn’t stop me creating or performing now or ever. I’ve always said I think I’m going to be really good when I’m around 70 or 80 years old because by then you really don’t give a rats ass about anything!

TNT attended your show the other month at The 100 Club, it was great! What was it like playing 5 London shows in a row?

Thanks for coming TNT. The 100 Club has so much history it was so great to tread those particular boards. I was doing an interview and the journalist said to me nobody does 5 shows in a row in London as it’s too hard which I thought was kind of lame if that was the case….5 in a row is normal in Oz, I could do 50 in a row! Just need the agent to get off their asses and book more dates.

I will be back there asap….got lots in the pipeline.

You’ve toured the world countless times with several different bands, so we wanted to know your most crazy tour story?

My most crazy story was getting out of hospital in Sydney after 2 operations and getting a staff infection which kills a lot of folks apparently. I had a broken right leg and a right thumb that got snapped in half!!  I got on a flight straight from the hospital from Sydney to New York to start rehearsals with the band I created called the Dead Daisies for a 2 month tour through the US…the Americans thought I was mad, but I’m one of those guys that just can’t let people down.

I always try to do the right thing and fact was I could still sing. I was in a wheelchair but still performed every night amidst massive pain and got on that bus and travelled all throughout America, it was pretty crazy but you do that for your mates … can’t let the team down. And then you find out they’re not your mates at all….and that was even more crazy.

Where has been your favourite place you’ve visited on your travels and why?

Home is always the best place to travel….why? Because that’s where you are truly deeply loved for real.

Anywhere you really want to go in the world but haven’t had the opportunity yet?

Exclusive Interview: TNT talks to Australian PM Julia Gillard on her biggest year yet and what’s next

Interview with Something For Kate