These were among his comedy weapons, along with the backing of a symphony orchestra, when he took the 2011 Comedy Proms by storm.

Even he, quietly of course, was pinching himself. “I knew it was a good venue, but when I walked up to it that’s when it really hit me,” Wills says.

“It holds 7000 people! There is something very strange about being on that stage shaking two horse heads [more of his props] around with a whole orchestra behind you.”

Not bad for a show in which, as the tape-instigated silence suggests, the sole performer says not a word.

The Boy is a silent comedy theatre character, an alter-ego of sorts that juggler-turned-stage star Wills describes as a “heightened version of the teenage boy inside of me”. 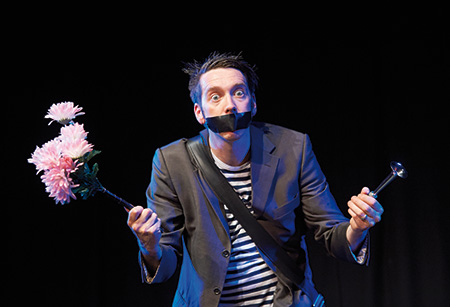 Wills, who moved to the UK in 2006 and performed in Covent Garden Piazza with dreams of a West End show, takes his inspiration from the likes of offbeat stunt performers The Jim Rose Circus and Tokyo Shock Boys, and initially dreamed of being a juggler in Las Vegas.

But The Boy is quite unlike anything he has done before, and purposefully so.

“I was doing other shows and performances, the more talky based stand-up comedy shows,” he says of his street performing roots.

“But I wanted to do something new and challenge myself.

“I decided to take my skills, doing stunts, and then do a show that didn’t use them – no tricks, no talking.”

The result is no more nail-in-the-nose shock shows. Instead, he draws on Buster Keaton and Charlie Chaplin’s vaudeville stylings, old-fashioned clowning and all manner of unpredictable props, music and the audience.

With his physical comedy and quirky inventiveness comes an act that transcends language, age, gender and cultural differences.

This universal appeal was always part of Wills’ goal.

“I always think of international audiences,” he says of his plans for a show that deserves to, and most likely will, go global.

“I stop my music at the late Eighties and early Nineties, because I want there to be an element of nostalgia. I want people to go, ‘I remember this song’, rather than it being,

So Patrick Swayze classic Ghost crops up, so too cliched French accordion music and the theme to Tom Cruise’s Days Of Thunder, which accompanies, as Wills puts it, “a cheap cock gag done very well”.

One of the key elements of the show has always been its audience participation. It is not so much a show at which you might get asked a question or two if you’re sat in the front row, but one where you are fair game no matter what seat number you have – he often calls on the back row, showing his penchant for bucking convention.

You could end up on stage stripping at The Boy’s behest or in a staple gun shootout with balloons – whatever it is, you won’t expect it.

“Luckily it can’t go wrong,” he enthuses of the show’s highly unpredictable element. “It doesn’t matter what people do, because I can guide them around to where I want them. 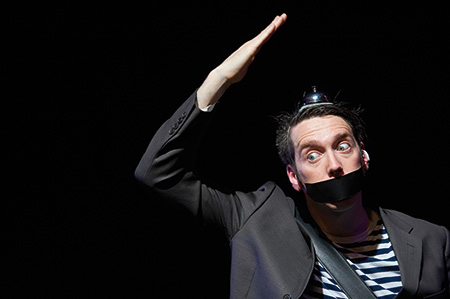 I want really normal people, though – the more human and natural they are, the more people will laugh.

So if someone’s going ‘pick me’ or saying their mate ‘is hilarious’, then I won’t pick them as they’re too eager.

Sometimes people have said they’ve been disappointed they weren’t chosen, which is very strange for audience participation to have that reaction.”

Although he says it can’t go wrong, there have been moments when relying on a member of the public has had joyously unexpected results.

“There is one routine where I get a guy up and dress him [over his clothes] in overalls, a hi-vis jacket and a hard hat [before then sitting him back down in the audience]. It’s the stripper routine.

But this one guy in Glasgow just kept going and taking off his own clothes.

I just sat there and thought: ‘I am staying put, this is great.’

And the audience loved it. I have had some very reluctant strippers though, who just stand there, but that just becomes funnier and funnier.” 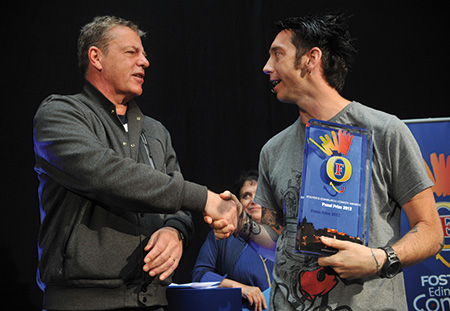 Writing such diverse shows comes from, Wills says, a combination of improvisation and inspiration seeking.

“There is a shop near my house that has all these kinds of oddities and bits and pieces in it,” he reveals of his shopkeeper-baffling process that has on occasion involved returning several times within the same day to buy one toilet plunger after another (consider what William Tell could have done with this device and you’ll be near The Boy’s use). Indeed, a new sketch involves an equally everyday object.

“I thought about what The Boy’s musical instrument would be,” he muses.

I might do that and play the Deliverance song on it!” He could call it Duelling Dispens-os. 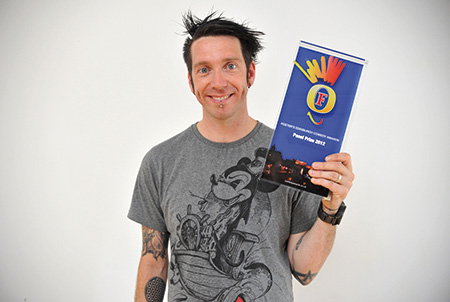 Despite these new routine ideas, this forthcoming winter run is drawn from his recent More Tape show – a breakout hit this year at the Edinburgh Fringe, where he picked up the Foster’s Edinburgh Comedy Awards’ Panel prize – as well as 20 minutes of his favourite stuff, “the hits” as he puts it.“

The first show I wrote as an introduction to the character, and it had everything in it I wanted, so people would know the style of the jokes,” he says of The Boy’s evolution.

“The second I wrote to be bigger. If you think of the first show as one-liners, the second is like long-form joke-telling.

”To give more away about some of the routines would be to spoil the show for the uninitiated, be we’ll tease you with the prospect of clay pottery, Westerns (“that’s becoming a big hit at the moment”) and a wonderful routine involving a doll that’s as sweet and charming as it is hilarious.

Also, a climactic finale in which “an audience member triggers a T-minus countdown”.

The only real shame about The Boy not speaking is that, in person, Wills is a charming and energetic wee man, his conversation peppered with laughs and anecdotes and infectious enthusiasm, which probably explains why his show is as popular with the public as it is the critics.

“We get people who come more than once,” he reveals.

“I had a guy in Melbourne who came nine times.

“What usually happens is that they’ll come back with a friend and sit there going ‘you have to see this bit!’.”

And with three weeks of performances to pick from, you can bet he’ll have a whole new group of repeat offenders come the new year.

Interview: Comedian Ronny Chieng on not fitting in and being proud of it