Get it wrong and you can stumble into an indecipherable labyrinth of complications resulting in audience bafflement.

These were concerns that writer-director Rian Johnson was well aware of when he embarked on his time travel gangster thriller Looper.

“If you dig too deeply into any time travel construct it makes no sense and it’s going to hurt your head,” the east coast-born, California-raised filmmaker says.

“As a writer you have to consign yourself to being a card magician – you have to come up with a consistent set of rules and stick to them.

Your job’s to give the audience enough so the time travel will perform its function in your story, but then figure out how to misdirect with your other hand so they don’t spend the whole movie thinking too deeply about it.”

The action takes place in 2042; time travel is yet to be dreamt up, but that doesn’t mean the year is free from the effects of future users. Within the next 30 years, time travel is invented; by 2072, it has already been outlawed.

But people can still travel back, and, because of better forms of police detection, the practice has become a useful tool for criminals. 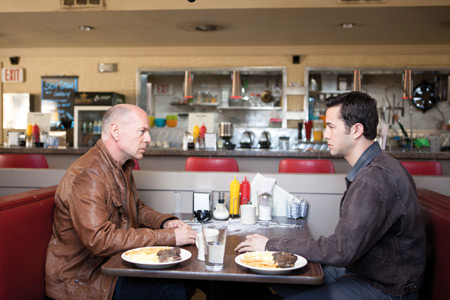 Rather than bumping people off using a pair of lead boots and the nearest river, they send them back 30 years to be eliminated by loopers.

These hitmen wait at pre-arranged locations, gun in hand, to kill the marked men – and they get a big payoff for their efforts.

The only rule is not to let your target get away. Of course, in Johnson’s tightly scripted thriller, this is exactly what happens to Joe when his older self is sent back.
Johnson’s third directorial offering sees him tackling a new genre.

After making his mark with high school noir Brick and conman caper The Brothers Bloom, Looper sees Johnson making his science fiction debut, and he brings the sort of witty, smart-mouthed dialogue and narrative surprises that we’ve come to expect from this hotshot filmmaker.

As well as contending with grandfather paradoxes, Johnson had to convincingly portray the same character on screen at two different ages.

“If we were going to have this distinct a concept where they’re supposed to be the same person, I wanted some physical transformation,” Johnson says.

“It is one thing where you have flashbacks or forwards and the actors are never in the same scene, but [Willis and Gordon-Levitt] were going to be sitting across the table from each other.” 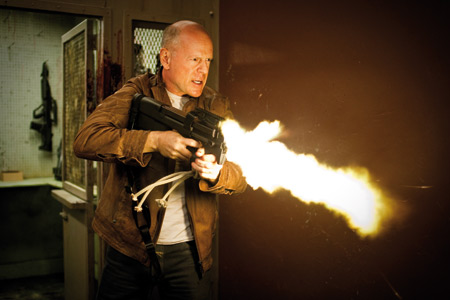 The answer was to subject the younger actor to three hours of prosthetic makeup every day to have him more closely resemble his co-star.

“I thought: let’s go the extra mile and make their profiles match a little bit, which was tough as they couldn’t look less alike.

We changed the shape of Joseph’s nose, gave his lip more of a shelf, adjusted his brow and changed his eye colour with contacts to make the connection stronger.” Gordon-Levitt even studied Willis’ mannerisms and speech to ensure their portrayals tallied up.

“Joseph wrapped himself around Bruce, who recorded Joseph’s voiceover lines and sent them to him so he could study how he [Bruce] would say them.”

Small adjustments like Bruceifying his lead were just part and parcel of Johnson’s dedication to making a sci-fi film rooted in the now, and is as believable as can be for a movie with such an outlandish premise.

He weaves his tale through a future that refracts the present to maximise effects. 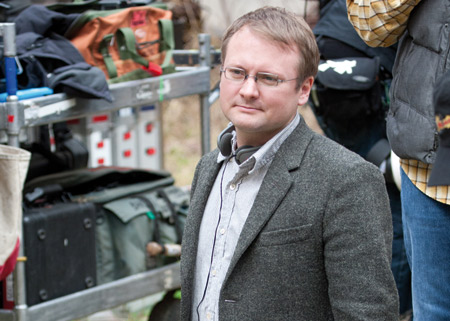 The world 20 years on is bleak: a dystopia riddled with deprivation, despair and urban decay, yet where the rural areas remain relatively unchanged, at least to our technology-scoping eyes.

That’s not to say Johnson’s future view is not populated with eye-catching gadgets and designs, though.

“I wanted to create a very grounded world that was recognisable and fun, and where you know instantly where you are at,” he says. “I wanted to knock the futuristic design elements back down to Earth a little.”

Looper is full of subtle future-tech designs – weaponry, paper-thin mobile phones, for example – only given a Johnson spin for practicality. So, where sci-fi film perennial the hoverbike is present, in Johnson’s world it is far from the coolest thing on the road.

“They don’t even look like hoverbikes, they look like Triumphs, and they don’t work that well. It’s a flashy thing to turn up to the club on, but they don’t steer well, they don’t brake well and anyone who cares about their ride wouldn’t be seen dead on one.”

More conspicuous amid the future tech, though, is the moral conundrum at Looper’s heart – if you knew how the future would play out, and your role in it, what would you do to ensure that good won out and evil, no matter where or who it was, did not?

In among his cross-generational leaps are subplots involving future gangsters (2072, right?) and the evolutionary development of telekinesis, but it is how the central character(s) deal with the aforementioned moral dilemma that drives the film.

While there are action sequences (foot chases, shootouts, hoverbike encounters …) and moments of heart-stopping visual invention (a tracking shot as Joe Jr falls from a building, the camera tilting and following his perspective the whole way down), it is these ethical and philosophical questions that engage the most, with clear lines to be drawn between Johnson’s film and The Matrix, another movie that mixes action thrills with profound ponderings.

“Sci-fi is geared towards getting at a real emotional core and recognisable human dilemma through crazy concepts,” Johnson says.

By using the time travel concept in his latest work, he’s made a mind- and heart-troubling movie. And he may well have made a cine-classic into the bargain.