We thought we lived in a world where it was near impossible to go ‘off radar’. But then we lost a plane.

At the time the April edition of TNT went to press, evidence was mounting that the Malaysian Airlines flight MH370 crashed into the Indian Ocean, but this was only due to the sighting of potential aircraft debris.

Before this, there had been no communications, no radar pick-ups, no sign of the plane whatsoever. And the world struggled to believe that, in the technology-crazed, all-accessible age of today, a plane holding 239 people had effectively vanished.

When we sat down with Australian actress Mia Wasikowska to talk about her role in Tracks, the mystery of the MH370 had yet to hit the headlines. On reflection, this interview has taken on an added poignancy. Tracks is about adventurer-come-author Robyn Davidson, who took off on a seemingly impossible 1,700 mile-long trek across the Australian desert, completely alone. We spoke of how when Davidson did this, back in the 1970s, she was labelled as ‘crazy’, but that now we could relate to her longing to escape and be completely autonomous. 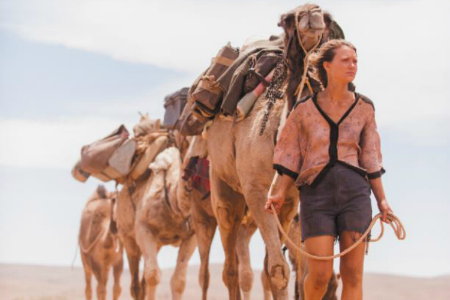 “I think people will relate to Robyn’s story even more now than they did back then,” Wasikowska said. “It’s very relevant in this day and age that people would want to take off and remove themselves from being always accessible. However, I think it would be much harder to get lost now than it would have been in those days. Technology and things like the internet and having a phone; people can always keep track of us in one way or another. I think it’s unlikely that it would be the same journey today, but you never know.”

You never know is right. Of course, unlike the passengers of MH370, Davidson consciously chose to ‘go missing’. She set off alone on this epic journey, and it takes a special – even complex – kind of person to have the guts and determination to tackle such a challenge, and an even stronger character to see the mission completed. For the young Wasikowska, it was quite a nerve-racking experience to meet the real woman behind the amazing tale, but also an eye-opening one, which allowed her to understand the reasoning behind Davidson’s journey.

“People had such a hard time understanding her. After doing this film, I do understand her now and I know that she’s not just straightforward – you can’t guess what she’s going to do next. It just seems very understandable to me to want to remove yourself from your environment and put yourself into a place where things are simplified. She took it all back to the basics of survival and attending to her needs as they were in the moment. I think that’s very brave. I was quite nervous about meeting her, because the Robyn in the book was ready to punch anybody who would try to play her, but while shooting the film she was so incredibly warm and kind. She’s a really nice person.”

Even more flattering, Davidson all but hand-picked Wasikowska to portray her inspirational character on the big screen after many, many pitches from movie studios and various actors vying to take on the role.

For a number of years it seemed people were lining up to re-create Davidson’s journey via motion picture and faced nothing but rejection from the woman herself, until producers Emile Sherman and Iain Canning approached her with director John Curran. For the first time, the stars aligned and, with Wasikowska in tow, Tracks was underway.

“The book had been around for such a long time, so many times people had pitched to Robyn that they wanted to make it into a movie but it never happened. It had gone through a number of people’s hands and I don’t think Robyn felt that it was right at the time. We got along really well and, when I got to know her, I realised she was such an amazing person in real life. Her individuality and the strength of her character is so admirable. I respect that she decided to do something and saw it through. She overcame a lot and, in that way, it was such a self-testing experience, seeing whether she could overcome and conquer this really harsh environment.”

And, although Davidson walked 1,700 miles from Alice Springs to the west coast on her own, in many ways she wasn’t really alone. With four camels and her pet dog by her side, Davidson also found herself occasionally accompanied by the ever-persistent National Geographic magazine photographer Rick Smolan (Adam Driver) who not only helped her receive funding for her adventure, but also documented the nine-month trip. Also an on-again-off-again love interest, Wasikowska claims Davidson experienced many “blessings in disguise”, including Rick, whether she was aware of it at the time or not. 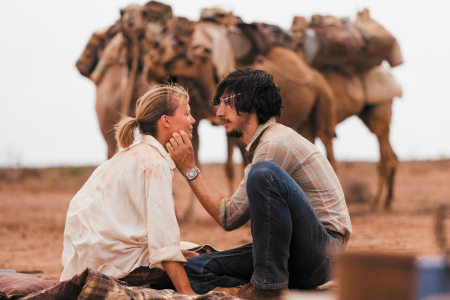 “The very things that enabled her to take this journey were also the things that took away the essence of the journey. National Geographic was going to fund her, which was great, but it also took away from the essence of her being on her own. But I think she also has this openness about her where the universe brings these people and things into her life which turn out to be important for her to complete her journey. She wanted three camels at first, but ended up with more – she got four. Rick came along when she wanted to be alone, and yet he helped her so much. There were so many blessings in disguise. I think Adam Driver plays Rick in such a super spontaneous way, he’s amazing. He’s so unfazed with the idea of improvising and staying on his toes the whole time.”

For Wasikowska, meanwhile, it was adjusting to the towering camels that required the actress to stay on her toes. By the end of it all, she came to realise the size of the animal doesn’t mean much when a relationship is established between man and beast.

“In the beginning the camels will test you to see how much they can get away with, and whether you’ll let them have control,” Wasikowska explains. “You have to let them know you’re the boss, though, you have to keep them in line, otherwise they’ll realise they’re stronger than you. They turned out to be quite sweet. I was so surprised because usually you associate big animals with something you shouldn’t touch. They actually have the personality of a cat or a dog – they’re goofy one minute then a bit snooty when they want to be. You can navigate their mood easily once you get to know them.

“When you put that experience together with the whole adventure Robyn went on, I think the whole message is to be in control of your own life – seize it.”

Tracks is out in cinemas from April 25.