“It’s amazing,” Rhys Darby says of his life. ”It’s been going well, career-wise, but at the end of the day, the essence of what I am about is stand-up, so it’s good to get to the point where I have got the proof I can produce a great show and am not just famous for being on TV.”

Darby’s waxing lyrical about his impending show, This Way To Spaceship, which lands in the UK this July. In particular, the Kiwi funnyman’s talking about Spaceship collecting the prestigious FRED Award for Best Show at the New Zealand International Comedy Festival this year. And, of course, the fame brought to him by a certain optimistic band manager, but more of him later. First off, though, Darby wants to tell us how to escape the apocalypse.

“I felt that it was 2012, the Mayan calendar was running out, there were, and still are, a lot of natural disasters happening, there’s global warming,” he says. “I thought: ‘What if things really are winding up?’” The end of the world makes for a pensive premise for a stand-up show – the death of the planet is hardly big laughs, but in the hands of Darby it serves as the launchpad for a predictably surreal, flight-of-fancy semi-autobiographical tale, with added spaceships.

“I was living in LA and filming a sitcom,” he explains. “Living the high life – I even had a pool! But I got to thinking that if the world ended, there were bound to be spaceships, somewhere, and, of course, ones for VIPs. But how would I get on there? The show starts with me on this ship looking back on my life and what I had done to get there.” What follows is a procession of ridiculous stories, some truthful, others less so, which flit in and out of Darby’s life, the comedian revelling in blurring the line between fact and fiction as he careers through vignettes of absurdity.

“I was inspired by Spike Milligan and his war memoir Adolf Hitler: My Part In His Downfall, which features true stories as well as flights of fancy,” Darby says. “The reader can decide what is true and what isn’t. It’s good to have that sort of artistic licence to spin a yarn. One moment I’ll be talking about an actual story from my life, the next about having sex with a mermaid.”

Darby has a long association with the UK, first arriving in 2002 to pursue a career as a stand-up. “We didn’t have a comedy scene in New Zealand,” he says. “It always seemed like something that was happening in the UK or the US.” The journey to the northern hemisphere was not part of the plan from the start, however, and was only on the agenda after another curious alter-ego career path had been jettisoned. “I am the most unlikely candidate to have served in the military by choice,” Darby recalls of his army days. “I was in the army cadets at school and it seemed like a natural progression. My idea was to become an officer, my mother would be proud and I would lead a battalion into battle and rescue some POWs from a war-torn village.” Lofty aspirations, it would seem, for a military signaller. 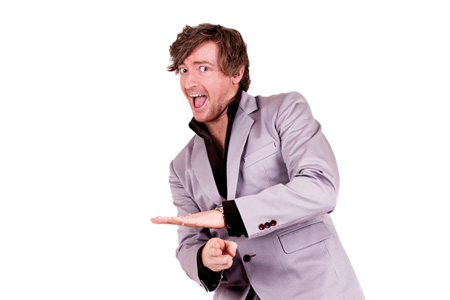 “The reality was a bit more like the training in Full Metal Jacket. My sense of humour got me in trouble, but I was good for morale and the sergeants liked me. I stayed for another three years, but got to a crossroads where I would have to do more courses, rise up the ranks and own a military house in the middle of nowhere. I looked at that and thought, ‘I might go to university’.”

His first foray into comedy was with Rhysently Granted, a sketch-and-song duo with friend Grant Lobban, but it was at the University of Canterbury on the outskirts of Christchurch that he really started to hone his funnyman skills. “I saw an ad in the paper for the Green Room, a new performance cafe that turned out to be a good student hangout with a beatnik vibe and performances every night.

I got on really well with the owners; three girls, one of whom is now my wife [Rosie Carnahan]. I was there most nights staring at her, and watching the other acts, whether it was music or poetry or something obscure,” he remembers. “Quickly, over two years, more people came down to the show until we became the South Island hub of comedy. Rosie and I lived in an apartment above the building, and became the couple who let the scene flourish. It was quite a romantic beginning.”

The move to Britain, climbing the ladder of the UK comedy circuit, followed, before Flight Of The Conchords set Darby‘s star soaring as the perpetually optimistic, yet hopelessly misguided band manager, Murray. The show, shot in the US and hit on both sides of the Atlantic, captured the attention of the Hollywood crowd. Roles in Jim Carrey comedy Yes Man, and fellow NZ expat Richard Curtis’s The Boat That Rocked followed, before he decided to step away from the silly roles.

“I took the lead in an indie film called Coming And Going, and was excited to see if I could be the lead in a rom-com. And then I did a New Zealand film called Love Birds, about a guy who, essentially, has a three-way love affair with a woman and a duck. I thought more people would see it, but they didn’t – it came out here the same week as the [2011 Christchurch] earthquake and so not much attention was paid to it, as you can imagine.”

Comedy, though, remains Darby’s first love – “It is just more fun! I love making people laugh” – and he now shares his time between Los Angeles and New Zealand, where he returned after the second season of Conchords. But what of Murray, the well-meaning misfiring Conchordian who catapulted Darby to international fame?  Does he miss him? Far from lamenting a character with which most people readily associate him, Darby has more than just a soft spot for the friendly band manager.
“He has a naive optimism, there isn’t a bad bone in his body,” he explains. “And that represents the New Zealand mindset as a whole – an impressionable type of person that doesn’t mean harm to anyone and about whom people enjoy laughing at. I’m waiting for the opportunity to outdo Murray, but until that time comes he is ‘top of the pops’.”

It is highly likely, though, that the next ‘character’ to outdo Murray will be the talented Darby himself, as he boards his spaceship on a tour of out-of-this-world humour.