How did you feel when you won the role of Rae Earl in My Mad Fat Diary?

All my auditions were in London with the casting director, Jane Ripley, and it was a long process.

I had to do four or five auditions. I couldn’t believe I’d got the part. Even now, I have to pinch myself that I’m actually playing Rae!

How important was it that the show portrayed Rae’s journals and mental illness with honesty?

It was really important, and not just to me.

I didn’t want someone who’s been through the struggles Rae has, or is currently going through it, to be thinking: “That’s not what it’s like.” It was important to make Rae as real and believable as possible.

Do you feel a responsibility to how people react to the show? It would be naive to say I didn’t, of course I do.

The people who have tweeted me or sent messages have all been extremely kind. It’s been overwhelming. They feel Rae is someone to look up to. 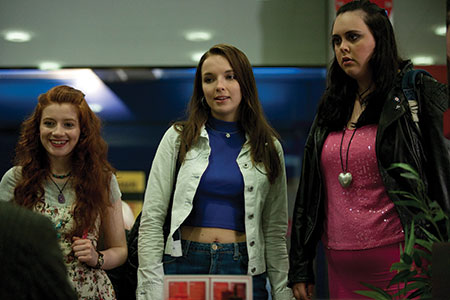 Rae struggles with body image issues –are we too preoccupied with looks?

I think sometimes we can be. It’s nice to take pride in our appearance, but looks aren’t everything.

It’s good to make the most of what you’ve got and accept yourself.

We all have days where we think we look good, and days where we don’t. If I see someone when I’m out who looks great I’ll happily tell them!

A little compliment can make someone who’s feeling low get a little spring in their step.

Does TV promote an unhealthy idea of what ‘normal’ is to people of all ages?

We should be aspiring to be the best we can be so it would be unfair of me to say that. I do think sometimes there’s a false idea of how people look on TV and in magazines.

I think it would be nice to see a range of sizes and people on TV and in magazines.

Realistically, if you walk down the street you see so many different shapes, sizes, haircuts and styles, so it would be good to see that reflected on screen.

Sometimes the things you think make you ‘not normal’ are what other people love the most. 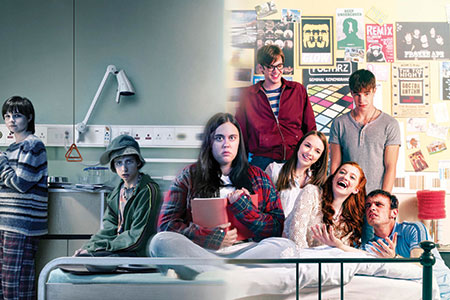 How did you empathise with Rae?

The beauty of Rae is that no matter who you are, you can empathise with her on some level.

Everyone’s been 16. It’s a hard age! There’s a lot of hormones flying around and Rae is dealing with that, but also her personal issues.

What was the most memorable day of filming on the show?

The rave was a brilliant day. It was [one of] the last days the gang [Rooney and her five co-stars] would be together on set before we finished, so it was a wicked time.

We all had a great day and because we had a real DJ it was like a proper party! Everyone was on great form, and the extras were all lovely, too.

Being Glaswegian, how did you find Rae’s Lincolnshire accent?

I hate saying this, but I didn’t find it hard. I really like doing accents, in fact I think it’s easier to do an accent because it gives you that little bit more separation between yourself and the character.

You’re a stand-up as well as an actress. How did you get started on stage?

My best friend’s a stand-up comedian and she got me involved. I’d sometimes do things on my own, but it was mostly together as a double act.

We had great fun and I’ve made some amazing friends on the Scottish comedy scene. It helps you laugh through the stressful times.

I think it’s easier to do something that’s really sad, though, than to make a room full of people who don’t like you laugh. Stand-up is really hard!

The show’s Nineties Britpop soundtrack is great – what music was big for you as a 16-year-old?

The music’s brilliant, and I’m into a lot of it now.

When I was 16, I mostly listened to whatever was in the charts or whatever everyone else had on. And I was really into musical theatre.

You auditioned for Skins before. Do you feel not getting that was ‘meant to be’ so that you could do this show?

I wasn’t up for a particular role – it was a kind of open casting. If I hadn’t gone, I might not have met Jane [Ripley].

My gran always says: “What is for you, won’t go by you.” And I think I believe her in that.