Doug Bollinger may hate his nickname but ‘Doug the Rug’ is part of the furniture for Australian cricket. It may surprise many, though, that despite the high regard in which the big left-arm quick is held, he’s played just 12 Tests for his country.

A member of the squad for the 5-0 Ashes whitewash Down Under, Bollinger could only watch from the boundary as Michael Clarke’s preferred 11 went unchanged throughout the series.

But Dougie remains well and truly in the sights of the Aussie selectors. He was the immediate inclusion for the World Twenty 20 in Bangladesh when Ashes destroyer Mitchell Johnson fell victim to an infected toe and was ruled out of the tournament, and was one of the top performers in a disappointing campaign.

Bollinger’s aim now is to be in the right nick at the right time when there’s next a sniff of an opportunity to play again in the creams and Baggy Green. That fine-tuning is happening at the picturesque St Lawrence Ground in Kent.

“You never know, hopefully I’m still considered for all that,” says the modest New South Welshman whose last five dayer was the ill-fated innings and 71-run Ashes flogging in Adelaide in 2010.

“Hopefully being here and playing as much county cricket as I can before I go home or to Champions League can give me a bit of a leap for next year.

“It’s hard to pin-point what you’ve got to do and how you’ve got to perform to be picked, it’s just one of those things you can’t look into. If I get a chance I get a chance, but let me get through the UK summer and summer back home and give me a call this time next year.” 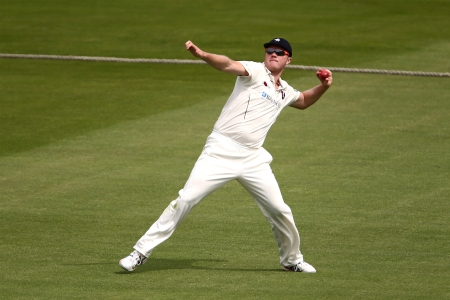 If we’re being blunt, one thing that would boost his chances to add to his 50 Test wickets would be Johnson not being available.

Selectors ahead of the Ashes made a massive call in picking Johnson o Bollinger, with the mental and physical frailty of the former’s previous Test escapades fresh in the mind. Doug would have been the safe choice, a more reliable option than the erratic slinging of his tattooed fellow leftie. But 37 wickets and the Player of the Series award validated their call.

“It’s just what happens,” says Bollinger. “Mitch picked himself up in a amazing way [from previous disappointments]. And what he did in the Ashes was fantastic, just good to watch. I was there for the Tests and it was impressive. Also, a lot of people forget Ryan Harris was bowling really fast and swinging it so…”

Add to that the third quick Peter Siddle charging in for long spells and spinner Nathan Lyon tying down his end, allowing Clarke to use Johnson in snappy, brutal bursts – not to mention the team winning – it was a tough circle to infiltrate.

Still, even with his 37 scalps in five matches against England mending his stats from previous disasters, Johnson’s average,strike rate and economy rate still trail Bollinger’s.

Barring injury, both 32-year olds will be in the touring parties for the triangular ODI series against South Africa and Zimbabwe in Harare in August and October’s T20, ODI and Test series against Pakistan in the UAE. Bollinger is certain a stint in England, with its variety of conditions and challenges across all formats, is the place to prove himself. And he’s convinced his best is yet to come.

“The ball’s coming out really well,” he says. “I’m really enjoying bowling here and having to adapt to different conditions; I think it’s a great challenge for me.

“If I keep playing cricket well and stay fit, you never know what can happen.“That’s as simple as I want to keep it… if I have too many things in front of me I’ll go stupid.”Bollinger’s already picked up two five-wicket hauls in his first five games for the Spitfires, and he feels like he’s constantly improving,although he isn’t a fan of the British weather.

“I’d like the sun to be out a bit more, but it’s a whole new experience, and it’s taking me out of my comfort zone a bit and I’m really enjoying it.

“Trying to dominate here is going to be another notch in my belt. I’m getting wickets here. I feel like I’m bowling well, I’m fit, and that’s all that matters mate.”

The old enemy will face off when the Ashes tour goes to England in June next year. Time will tell whose side Doug will be on. 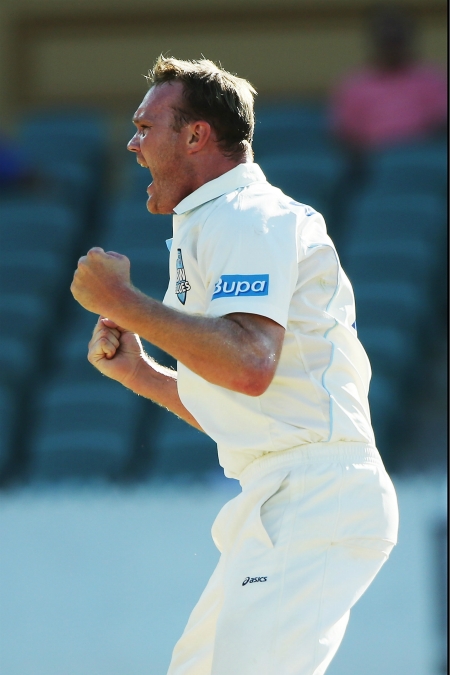 Interview: Pam Ann talks mile high glamour, why Ryanair is the pits, and why Madonna should just let it go