Talk about a pleasant surprise and one hell of a way to celebrate a major milestone.

When Australia’s favourite festival band, The Cat Empire, recently performed their 1,000th show at Melbourne’s Federation Square, more than 10,000 people showed up to rise to the special occasion. This made for one of the most fun and memorable experiences frontman Felix Riebl and his travelling crew of musos have ever had. That was back in March of this year, and now, come July and August, The Cat Empire are set to make a return to England for what Reibl describes as the ‘centre point’ of the band’s upcoming European tour.

“It was a great way for us to start the year,” says the singer of the Federation Square milestone show. “We’d had a very relaxing three or four months at the start of 2014 where we just did a couple of gigs, including the Falls Festival, and then we had our 1,000th show, which was just amazing.

“It was a free outdoor concert in Melbourne and the turn out was incredible. It was such a surprise to us. We learnt that something like 10,000 people actually turned up and it was a really great range in terms of ages. Some of them had been with us for the last 10 years, so it was a real mixture of older people, adults and kids – a really amazing cross-section of the city for this big event. ”

Never one to normally get worked up or make a big deal out of milestones, Riebl claims that in this case, it was near impossible to retain his composure. Witnessing a sea of people approaching the stage almost out of nowhere was nothing short of goose-bump inducing, according to the singer.

“We weren’t sure what kind of show it would be in general. I don’t tend to really think much of celebrating milestones or anything like that, I don’t plan things like that. It’s just usually a spontaneous thing when I happen to have a good night. I really wasn’t expecting very much from this event, to be honest.

“At first I had a peek out to the stage and I saw there were some people out the front, but then about 15 minutes before we walked onto the stage and began to play, literally a sea of people arrived out of the blue and we were faced with this complete surprise! I believe that’s the best way to deal with milestones – to be genuinely surprised by them, to let the whole process happen naturally and to just go with the flow. I think that’s basically the way that most good things happen anyway.”

And while Riebl admits The Cat Empire’s 1,000th show at Federation Square was one of the band’s biggest highlights so far, he adds that touring Europe – and especially the UK – just may come in at a close second when it comes to the best things to happen for his band in 2014.

Partly it is to do with the group’s loyal fan base, which extends all the way to London, and partly it is due to the majestic venues The Cat Empire is set to perform in over July and August, according to the singer.

“We’ll be touring for about six weeks in early July and mid-August,” Riebl explains. “Our fan base is amazing and very passionate in Europe – many of them travel from place to place just to see us. I consider The Cat Empire to be a pretty international band in terms of our identity, so I can see why our music would appeal to people around the world.

“The two UK shows are something that I am particularly looking forward to – any chance we get to go there is something that I am thrilled to take on. The Somerset House show is the one that I am extremely looking forward to because I’ve been looking up some of the venue’s pictures and it looks quite magical, actually. The Boom Town Fair, which we will be taking part in, looks equally as eccentric and I think that one should be really chilled out. I think both of the shows and the sort of atmosphere they seem to have about them should be terrific for a band like us.”

Virtually impossible to categorise due to their melting pot of sounds and influences, The Cat Empire are best described as a festival band who are akin to a travelling troupe of musical showies. A strong festive spirit has always defined the band at its core, and the effect this has had on their audiences over the last decade has cemented The Cat Empire’s reputation as one of the ‘must-see’ live bands to ever come out of Australia.

“There is definitely a festive spirit in the band and that probably translates really went into the festival setting,” offers Riebl. “I think when you take all of our influences and the music we like, and when you fuse them together, you embrace all those contrasts and you end up with something that is entirely unique. If you express that festive attitude as well, then it really does begin to feel like you’re putting on a small, private festival of your own night after night. If you think about it, festivals are made up of contrasts that are slammed against each other – often you’ll get bands that are of very different genres billed one after another – and that’s what makes that special dynamic and theatrical space.

“To have a bunch of musicians who can improvise quite a lot on stage and fans who want to hear something a little bit different, then that’s where that spirit of The Cat Empire is at its most alive. Our fans have one very important thing in common – they have that dancing spirit. They want to move their bodies and they want to take in that powerful energy that only music can bring.”

As in a live setting, so on record, as far as The Cat Empire are concerned. Peculiarly, Riebl and his band of ever-rotating musicians have always managed to translate the festive energy of their performances into the recording sessions; something that only a few artists could ever hope to achieve to perfection.

Touring on the back of their 2013 album Steal The Light, Riebl says of the band’s sixth full-length record that The Cat Empire have done a bit of a 360 – and long-time fans will have no trouble spotting where.

“Our debut album [self-titled, 2003] had a travelling, adventurous spirit about it and, since we did that in Cuba, it had that raw sound to it. Then the few albums in between that, we explored a more melancholy sound, which was maybe a little more removed and touched on a few emotional places. With this album, I think there is still a reference to the melancholy aspect somewhat, but there is much more of a return to something more festive again, reminiscent of the first album. You can’t be too sad with your music and you don’t want to take it too seriously because, at the end of the day, you want people to sing and dance to it. 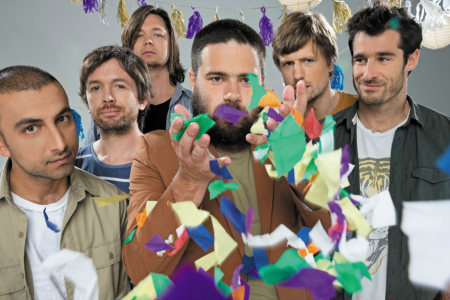 “Besides, music is meant to be experienced and not scrutinised too closely. Everyone in this band has evolved as a person and has experienced a range of emotional dips and rises, but in the end we’ve finished up at this place that is exciting again, and that’s what we want to express.”

And what better way to do so than within beautiful European mansions that have been transformed into music venues?

“I think venues such as Somerset House will add a special sense of magic and wonder to the entire experience –it’s an exceptional place that we are very curious about. We don’t come by places like that every day, so I can guarantee these shows will be something entirely different for us too.”

So what’s next for the Cats? “Once the tour is over, we’ll be getting involved in some collaborations with other people. The Cat Empire started off with so many different musicians and performers – one of our first ever tours was at the Edinburgh Fringe Festival and on any given night some of the most amazing performers and musicians and even acrobats would just jump on stage and that’s how we operated!

“The band was always very good at adapting to different things, so we are planning on playing with more people and getting back into that. Although I can’t really name any names just yet, I can say that I hope people stay tuned and follow us on Facebook and Twitter for when we announce more details.”

Catch The Cat Empire on July 13 as part of the Somerset House series (somersethouse.org.uk) and also at BoomTown Fair (August 7-10, boomtownfair.co.uk). To win tickets to BoomTown, visit tntmagazine.com/competitions

Interview: Edith Bowman on ‘performing’ at T In The Park, swearing on air and her Warp Factor past