Fronted by the Madden twins and with close to 12m album sales under their belt, there’s no denying Good Charlotte are one of the biggest bands around right now. Of course, their profile hasn’t been hurt by Joel being engaged to Nicole Ritchie and Benji being previously linked to Paris Hilton and Sophie Monk. So, with fifth album Cardiology out now and an Aussie tour in the pipeline, we caught up with guitarist Benji (pictured right) in Sydney…

Hey Benji, how are you liking Oz? We’ve always just had a really great time here. We feel really at home and have got a lot of friends here. The nightlife in Sydney is really great.

So, did Sydney like your new songs? Yeah, actually last night when we played “Like It’s Her Birthday”, I got chills. The crowd went off, that was really cool. It’s always really cool to see, to make a record and put the time in and put it out there and then see the reaction. Especially 10 years in, you always have that little question at the back of your head, “ah, I wonder if we still have it”. So when the reaction’s that good it’s really rewarding, more rewarding than any chart number.

You’re famously down-to-earth. How do you stay so grounded? Ha, hang on a sec, I’ll just send my latte back! Well that’s nice to hear. I think the entertainment industry is just silly. I just feel like people take it so serious sometimes. You know, I’ve had real problems before, the past 10 years my only problems have been quality problems. But before things took off, we definitely had a time when it was a real struggle and you feel the weight of the world on your back. Once that weight gets lifted it’s kind of hard to take any of the problems that come with this job too seriously. I don’t know if we’re more grounded than anybody else. Me and my band have been together since high school so if anybody’s feet come off the ground they get a little jab to the kidney.

How do you feel about the celebrity stories you feature in? I don’t read it. I feel those gossipy kind of magazines, that’s kind of like a chick thing. My brother, in his household, and definitely in my house, we don’t keep any of those magazines or go to any of those websites so it doesn’t really exist to me. When you go out in LA, every once in a while some photographer will pop out. That’s always a little awkward. Those people can be annoying but it’s more that I don’t really get it. I definitely don’t let it dictate anything I do in my life. All I can do is be me. I just figure I’m a good dude, my brother’s a good dude, my band are good guys. Every once in a while someone might not like something but we’re not hurting anybody. It is what it is.

Okay, so one celeb question. Are Joel and Nicole getting married soon? I just feel bad for Joel and Nicole because they haven’t even had time to think about it. I’ve heard everyone saying that it’s happening then or then. Man, don’t worry. They will get married, just give them some time.

Are you a bit more chilled out on tour nowadays? We can hang with the best of them. We’ve been on tour since we were 19. Sometimes when you see those 80s bands and they’re still partying and you’re like, jeez, that’s not what I want to be like. I guess as you get older it naturally changes and now everyone’s got families except for me, but I’m definitely part of each of their families, so we don’t act like we’re 21 any more. But every now and then we’ll have a big night, when we have a younger band on tour we like to show them a good time.

Are you addicted to getting tattoes? Yeah, I guess I’ve been addicted since I was a little kid. I always knew I was going to be covered in tattoes. I had an uncle with tattoes, he was a badass. He was one dude you just wouldn’t want to mess with and he was always my favourite uncle. I was like, “yeah, when I grow up I want to get tattoes”.

What was your first tat? When I was 17. I got the Irish flag on my arm because of our family heritage. I still have some family in Limerick.

Nicole Ritchie just tweeted that you have two-and-a-half nipples… Not true. She’s got an interesting sense of humour.

And some quickfire ones. If you had to join another band, which would you choose? I’d get Oasis back together.

What instrument do you wish you could play? Accordion.

And what’s in your pockets? Er, a lighter, change and iPhone. 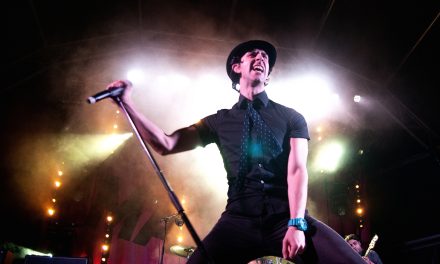