That’s the scenario in American Maury Yeston’s 2011 musical, based on a 1920’s Italian play by Alberto Cassella which was also the inspiration behind the movie Meet Joe Black. Fatigued by his First World War exertions, Death is unexpectedly enchanted by Grazia (the free-spirited daughter of a Duke) and decides that her time hasn’t yet come when she’s violently thrown from a speeding car on the way home from celebrating her engagement. Suddenly, he yearns to experience the emotions of being human.

It’s an intriguing prospect which sees old timers rejuvenated (the cloud of dementia disappears from one, the aches and pains of lumbago from another) but puts dread into the heart of the Duke who, alone with servant Fidele, knows the true identity of the mysterious Russian, Prince Nikolai. Despite the uninvited house guest’s promise to depart – alone – after his minibreak, the Duke fears (with good reason, it transpires) for Grazia’s safety when Death is scheduled to resume normal activities at midnight on Sunday. 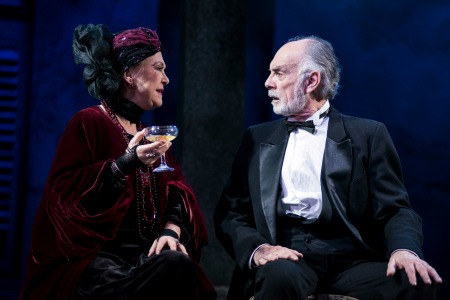 Played out on an appropriately tombstone grey set (and with some gorgeous gowns for Zoë Doano’s infatuated Grazia) Thom Southerland’s enjoyable production boasts rousing melodies, emotional duets and impassioned solos. Everyone gets a chance to shine, with Chris Peluso particularly rich-voiced as the Grim Reaper in disguise.

It’s all quite preposterous, of course, but hey, it’s a musical – and although the touches of comedy don’t always sit easily with the overblown rapture, it all makes for an entertaining evening with a pleasingly lush score and costumes to match.