Based loosely on the story of the rise to fame of the Supremes, the trajectory of the fictional Dreams makes up in volume and glitter what it lacks in subtlety and originality.

From ambitious schoolgirl Dreamettes to sleek, glamorously bewigged singers in sparkle-studded gowns, Effie, Deena and Lorrell graduate from talent show contestants, to backing group, to chart-topping success in the early days of Motown, thanks not only to their voices, but also to the often underhand efforts of former car salesman Curtis who spots an opportunity and becomes not only their manager but first Effie’s, then Deena’s, lover.

There are fallings out and disagreements as Curtis repackages the trio and their sound to make them more acceptable to a wider audience, putting Liisi LaFontaine’s prettier, slimmer Deena into Effie’s rightful place as lead singer. 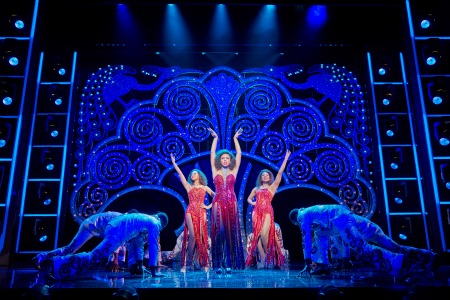 Tom Eyen (lyrics) and Henry Krieger (music) whisk us back to the early 60’s and 70’s with a batch of often over-amplified songs, Ibinabo Jack’s impressive Lorrell makes the mistake of falling for James Brown-like womaniser Jimmy Early (excellent, high-energy Adam J Bernard) and the set and costumes (and there are an incredible number of them) are drenched in sequins and crystals. But it’s Glee’s Amber Riley, stroppy and defiant as the supplanted Effie, who brings the house down with “And I’m Telling You I’m Not Going” as the interval curtain falls on Casey Nicholaw’s vibrant production.

London sound: essential gigs in the capital this week