Natwest T20: Australia win first game of summer thanks to a super-quick 156 from Aaron Finch

Finch’s innings of 14 sixes and 11 fours gave Australia the ultimate platform in Southampton while Shane Watson’s 37 from 16 balls just about the difference.

The result recorded the Aussies’ first win of the summer.

Joe Root was one of the few Test players to back up for the shorter form and smacked a controlled 90 not out off 49 deliveries as England only managed 6-209. 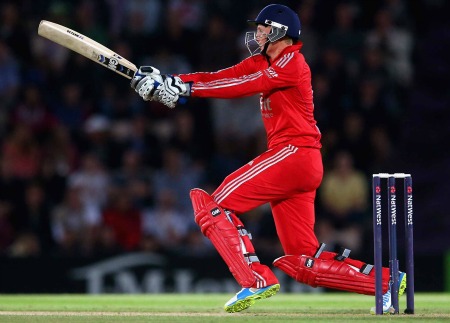 He showed class as well as courage, after he top-edged Josh Hazlewood into his helmet and the ball got caught in his grill before he’d got off the mark. It would have been an impressive knock any other day.

“Sometimes you have to hold your hands up, it was a magnificent knock by Finch and he won the game for Australia,” said Australia’s Test tormentor Stuart Broad, who taken the captaincy over for the 20-over matches.

“It was incredible striking and to hit 14 sixes in an innings is pretty special. It was amazing to watch but unpleasant to bowl at.

“The crowd will go home happy having seen 460 runs off 40 overs but there are 11 disappointed Englishmen that’s for sure.”

Finch was in a mood from the outset, pulling dropped Test quick Steven Finn for six with the first ball he faced.

Most of the time he was dispatching perfect cricket shots with power to all corners of the ground. Other times he didn’t even need to be on his feet to send the ball over the fence – this one disappeared over the cover boundary. 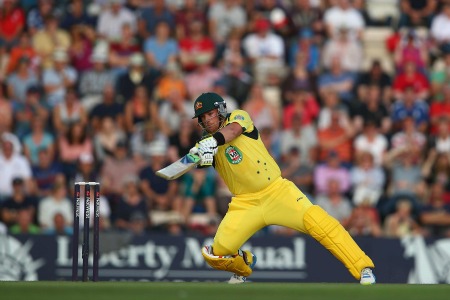 He also brought up his half-century with a straight six and hit two fours and three sixes off a single Joe Root over.

He got a dose of nerves in the 90s though, meaning he fell short of Richard Levi’s record of 45 balls for a century – he did it in a none too shabby 47 deliveries. 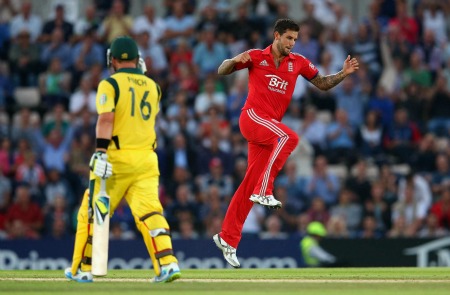 Jade Dernbach’s persistence paid off and he took Finch’s stumps with a slower ball before he could reach Chris Gayle’s 175-run T20 record.

“I was pretty lucky, a few things went my way but it was nice to get on a roll,” the Victorian told BBC Sport.