The hippies may have all now tuned out and dropped off and the Vietnam war, around which the show is set, is long over but the songs still sparkle and the ‘right on’ message of diversity and acceptance still rings as true today as it did in 1967.

Originally opening on Broadway, New York before coming to London a year later, Hair tells the story of a tribe of young hippies in NYC’s East Village getting high, getting their kit off and getting laid — all while trying to avoid being drafted to fight for Uncle Sam against communism in Vietnam. 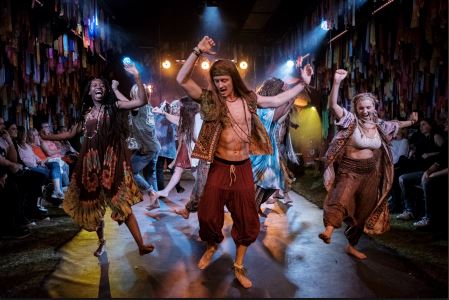 This version, directed by Jonathan O’Boyle remains true to the original whilst adding a few new touches to bring the show up to date with Trump’s America. Those classic tracks are still in there – the ones you’ve probably heard without ever knowing where they came from: “Aquarius”, “Ain’t Got No” and “Let the Sun Shine In” – they’re absolute belters and they’ll have you humming their tunes for a good couple of days after leaving the show.

The set is staged at the Vaults in Waterloo and this small theatre has been completely made over in psychedelic sixties style for a totally immersive experience. Even the bar serves hippie-themed cocktails which you can sip surrounded by flower-power posters and LSD-trip slogans. Beware of sitting too near the front if you don’t want to be drawn into the story by the cast. Even if you do, though, Hair is such a feel-good, far-out  show that you won’t mind getting swept up in the action. Just resist the urge to join the other actors stripping off all their clothes and letting it all hang out!