Puppets briefly preface each scene before Aussie actor Brendan Cowell’s excellent Galileo clicks on bright illuminating lights to begin the action. Heavily bearded, in jeans and T-shirt and, more often than not, with a pencil clutched in his hand, his body is as restless as his intellect as he prances round the raised wooden walkway, always in search of knowledge and more answers and falling foul of the Pope (and the Inquisitor) in the process. 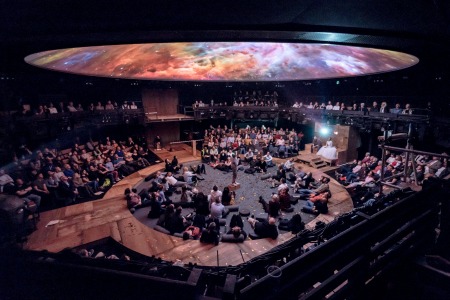 It’s a full-bloodied central performance round which the rest of the cast play multiple roles, including Billy Howle as the ultimately disillusioned young Andrea in whom the genius astronomer and physicist instils an uncompromising commitment to scientific truth, Brian Pettifer’s Cardinal subtly changing his stance with the addition of each layer of his stately robes, and Joshua James as wealthy Ludovico who decides that marrying the daughter of a man with heretical beliefs (and an opportunistic bent)  really isn’t for him.