Set in rural County Armagh, Northern Ireland, in 1981 (and faultlessly directed by Sam Mendes) this totally absorbing production fills the stage with the extended Carney family at harvest time. The farmhouse kitchen of former IRA activist turned farmer Quinn Carney is full of children and throbs with life as the day dawns on what promises to be a time of feasting and celebration. The teenage Corcoran brothers are coming over to help and meanwhile Des McAleer’s cheerful septuagenarian Uncle Pat is already heading for the whisky, Brid Brennan’s even older (and delectably named) Aunt Maggie Far Away only occasionally sparks into alertness, and Dearbhla Molloy’s fiercely Republican old Aunt Pat won’t let anyone forget that another hunger striker has just lost his life.

But, a decade after the unexplained disappearance of Quinn’s brother Seamus, a body has been unearthed – preserved in a bog across the border, with hands bound and a bullet hole in the skull – and the  past comes knocking.

For well over three hours (though it really doesn’t seem like it) Butterworth and his excellent twenty-one-strong cast keep us engrossed.  At the centre, making his stage debut, is Paddy Considine’s powerfully controlled Quinn, married to a frail wife (Genevieve O’Reilly) who has relinquished the running of the household to Laura Donnelly’s Caitlin,  the sister-in-law they gave a home to when her husband vanished. For ten years, Caitlin has kept alive the hope that he’ll return, but there’s a tangible mutual attraction between her and Quinn, which, like his past, is always there but remains unspoken, simmering below the surface. 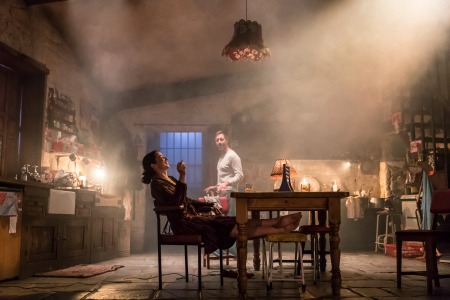 The run at the Royal Court sold out well before the first preview, but this faultless production of a play  – which will surely become a classic –  transfers to the West End in June. Make sure you don’t miss it.

Where to get a great G&T for World Gin Day