As narrator Tom (Williams’ alter ego) steps back into the past, his painfully shy, physically frail sister Laura emerges to join him and their misguided (though well-meaning) mother, to relive a time when all three sought escape from their individual unpalatable realities. For aspiring writer Tom, it’s the daily grind of working in a warehouse to support the family his father deserted long ago. For his mother, Amanda, thoughts of what might have been sustain her as she tries – too hard – to ensure her children do the best they can in the financially precarious 1930’s. And for Laura – too timid to face the outside world – it’s not fellow human beings but her precious collection of glass animals which (quite literally here) light up her life.  Until, that is, under pressure from Amanda, Tom brings a “gentleman caller” (Jim from work)  home for dinner. 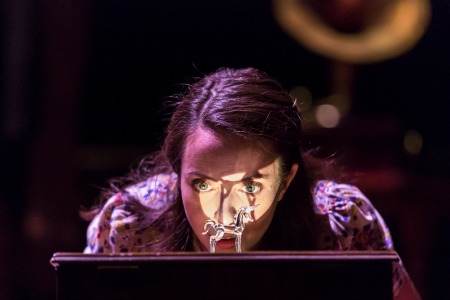 American actress Cherry Jones makes a vivid impression as she dresses up in the Southern belle finery of her youth to entertain their guest, but it’s the extended, painfully tender scene between Kate O’Flynn’s self-consciously awkward Laura and Brian J Smith’s likeable Jim with his easy charm which really touches. For a magical moment, the little statuettes no longer matter and it’s the tantalising possibility of another future which, all too briefly, fleetingly illuminates her face.

Mushroom in the Moss