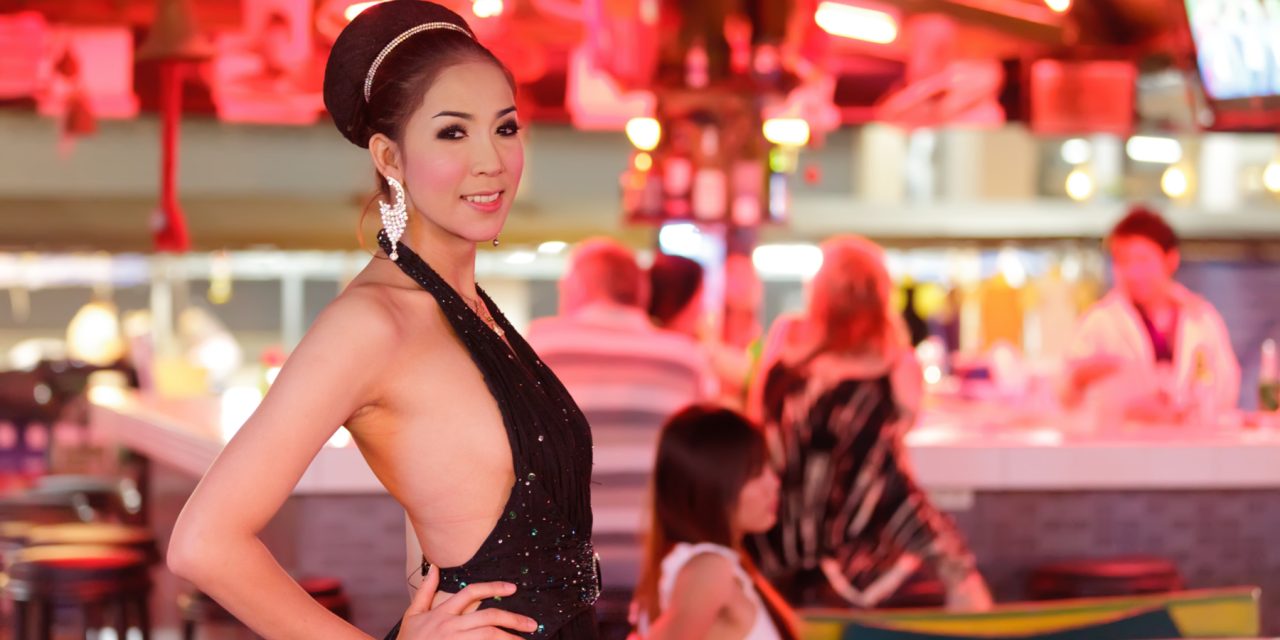 Thailand is the perfect place to begin a backpacking trip, it’s cheap, accessible, laden with culture and all round heaps of fun. I’ve been asked to pass on a couple of stories to inspire you and the brief was simple: pass on some tales and imperative insider knowledge. 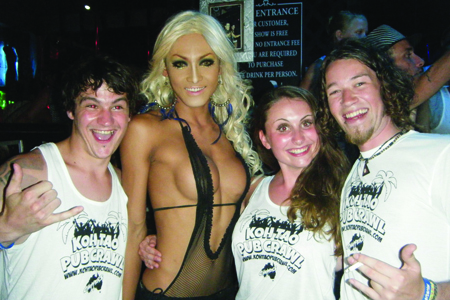 There are certain things that Thailand has become famous for – buckets of alcohol, street food, full moon parties, being the set of The Hangover 2… But up there with the most infamous on the list has to be the ladyboys of Thailand. I’ve met lots of people whohave stories to share about “their friend” who took home a girl only to discover a hidden surprise in the throws of passion.

Everyone seems to know someone who knows someone who ended up waking up next to a pre-op ladyboy. I’m biting the bullet, though, and telling you outright that I ended up being that unfortunate person, I got snog-raped by a Thai ladyboy!

The setup was simple, I was enjoying the island paradise of Koh Tao, famed for its diving and nightlife and I recalled a buddy of mine who recommended a ladyboy cabaret show. Naturally I’d seen plenty of these ladyboys walking around the place, dolled up in makeup, making leering come-ons to the backpackers who walked by. But, as with everything out of the norm, I was strangely intrigued and along with a group of guys and girls from my hostel we headed to the cabaret for the night. My first epic mistake of the evening was to grab a chair near the aisle. School boy error!

After an amusing show, during which every male in the room questioned the fact that they found some of the ‘girls’ attractive, they asked for some audience participation.

My buddies decided it would be amusing to volunteer me, and before I had the chance to object, I was herded backstage with a few other unsuspecting victims. We were ordered to strip and change into all manner of bikinis, skirts and wigs before being shoved back on stage.

One of the drunk Aussies in the group broke the ice, shouting out, “is it really weird that I’ve got a massive erection at the moment?”

Dancing around dressed as a chick, surrounded by wanna-be chicks for what felt like a lifetime was certainly a random experience, but the horror wasn’t over as one of the dancers decided to grab me by the cheeks and basically snogged me in front of the entire room.

There I was, dressed in a big wig, in a bikini with this sweaty cabaret chick with a dick trying to shove her (or rather, his) tongue down my throat.

I would say ‘what happens in Thailand stays in Thailand’, but, such is the life of the travel writer, the story has become one of my more amusing and random anecdotes. It does, however, get brought up a lot, especially during drunken games of “I have never…” 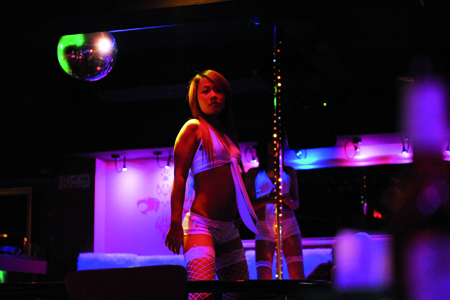 Along with the ladyboys of Thailand, the other sexually orientated show that has become a backpacker staple is the Bangkok ping pong show. If you haven’t already been, it’s a rather odd form of entertainment which displays a lot of vaginal skill with ladies firing ping pong balls, darts, razor blades and even small animals from between their thighs!

I’d heard a lot about them and was keen to go (from a writing perspective of course!) and on one of my last nights in Bangkok a couple of the girls I was travelling with decided to go and I decided to make a night of it, bringing my buddy Nic along for the ride.

Instead of opting for the Koh San Road version, we made the schoolboy error of jumping in a cab and asking the driver to take us to one. In hindsight this was the first of many stupid mistakes we made.

We pulled up in a seedy area (well, where else would you expect to head?) and chatted to a guy who said all wae had to do was buy at least one (overpriced) drink and the show was free – something we had all heard about before.
After being guided through a maze of corridors, we ended up in an empty room with a stage and a bar (another warning sign we ignored) and sat down.

The show itself was a mixture of disgusting, intriguing and downright weird – not the amusing drunken backpacker filled atmosphere we had envisioned. After a couple acts we decided to leave and everyone gave me their money to pay.

As I was expecting to hand over 800 Baht for four drinks (more than usual) you can imagine how much my stomach sank when I was presented with a bill for nearly 10 times that amount – the equivalent of well over $150. 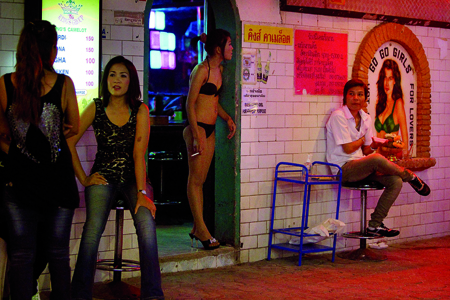 The next 45 minutes was the most intimidating and scariest time I’ve had on the road as we tried to haggle it down and play the backpacker card. We had clearly walked into a scam.

Soon we had two massive bouncers on either side of our group and a hoard of angry looking sex trade workers, complete with a downright evil looking madame who kept screaming at us in Thai.

Our combined cash pool came well short of the amount and at one point one of the bouncers told us that one of the girls would have to dance the tab off – that’s when we knew shit had really hit the fan.

I was about to put my camera into the pot when Nic pulled out some American dollars (he had just finished a ski season there) and the whole atmosphere changed. One of the bouncers disappeared and returned asking Nic if he had anymore. In total he had about $50 worth.

Then something weird happened – they gave us back pretty much all of our Thai money, took the dollars and told us to leave, which we did as quickly as we could.

Shaken up, confused and completely sobered up by the whole ordeal, we went straight to the 711 and promptly purchased a few beers.

In hindsight we all laughed about it, but at the time it caught us all off guard, despite all the warning signs. Would I go back to a ping pong show? Probably. Would I make sure it was a legitimate one? Definitely!

If you do decide to do anything random on the backpacker trail, simply trust your instincts and be a bit more wary than usual. 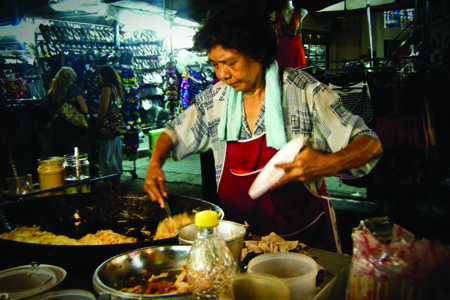 A taste of Thailand

Asia, in general, is famed for being a culinary exploration, with amazing dishes, from the delicious to the downright weird and disgusting (chicken foetus on a stick anyone?) and Thailand is no exception.Throughout my time there I sampled a whole heap of tasty treats. Here are a few of my favourites:

Steamed duck and soup: on Phi Phi Island there’s a little Thai market directly in front of the pier, here you can find an amazing little place that does a huge portion of steamed duck with rice, along with a soup starter. It’s always packed with locals and at 50 Baht (around $1.50) it’s great place for a bargain feed.

The Pad Thai Lady: on Koh San Road there’s an abundance of epic street food, but there’s one little old lady who resides down near the Burger King end and serves up the best Pad Thai in the entire country. I usually opted for the vegetarian version which came in at around $1.

Massaman Curry: this curry is one of the tastiest dishes I’ve eaten on my around the world travels, and each restaurant has its on in-house tweak on it. Personally, the best curry I found was on Phi Phi. It was laden with crushed peanuts and had a sweet, yet spicy flavour.

The hottest curry ever: up in Chang Mai there’s a great rooftop eatery called THC, you scale a crazy UV staircase and arrive on a great open air reggae cafe. The menu isn’t the cheapest but it contains some amazing food, including the hottest curry I’ve ever eaten – it made a vindaloo taste like a cold glass of milk! Ask for the green curry with coconut milk – you’ve been warned.

Bugs: yes, you can’t come to Asia without chowing down on some creepy crawlies! There are a lot of places which sell them, but the easiest and cheapest is on Koh San Road in Bangkok. I crunched down on some crickets and meal worms. I can’t say it was my favorite snack, but it’s definitely one for the bucket list and makes for some rather amusing pictures.

About the author: Chris Stevens is a travel writer, surfer and photographer from Devon in the UK. To read more about his round the world travels, head to his website, Backpacker Banter. 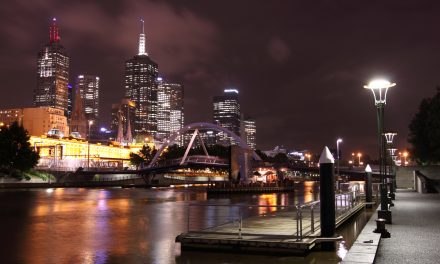 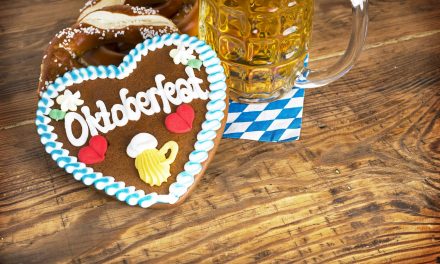 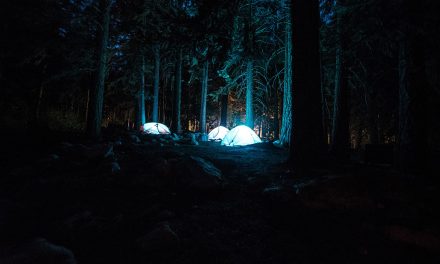 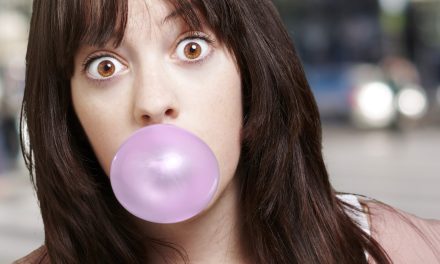