17 reasons to tick Barcelona off your bucket list In 2015

Parties like you’ve never experienced before at Off Sonar 2015
With blazing heat, white sands and prestigious DJ line-ups, there isn’t a better time to visit than during Off-Sonar week. Together Week Barcelona packages the best of the bunch and lets you save hundreds on events and accommodation.

Inspiring art at Museu Picasso
Take a break from the parties and soak up some culture; Barcelona’s full of it! The Museu Picasso houses one of the most extensive artwork collections of the 20th-century Spanish artist Pablo Picasso.

The toilet room DJ at the five-room multiclub Razzmatazz
That’s right, a club so big that even the toilet has a DJ. Razzmatazz has five rooms dedicated to different genres of electronic music. Oh, and it’s also got cages, sandwich vending machines and an immense terrace rooftop area. Roll on June! 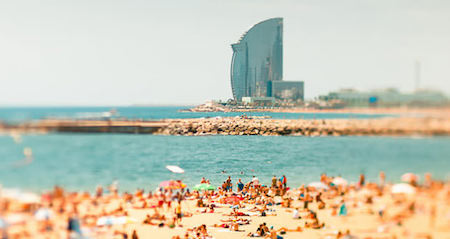 The night-time secrets of the famous Gaudi building ‘La Pedrera’
La Pedrera, or Casa Milà, is one of the last civil works designed by world-famous architect Antoni Gaudi. Try the immersive ‘The Secret Pedrera‘, an ‘intimate and highly sensory route to discover the nooks and crannies of this landmark building in a different way: in the peace, tranquility and magic of the night.’ Sounds like our kind of culture.

The Barceloneta Beach stretch
The biggest and most popular beach in Barcelona, Barceloneta boasts seven kilometres of golden sands from Port Vell to Port Olimpic plus the city’s best seafood restaurants.

Sonar Barcelona Festival
We couldn’t write this without crediting Sonar itself. After two decades of incredible parties, Sonar is one of the leading events in electronic and underground dance music.

The lush green Parc Güell
One of Gaudi’s major works, Parc Güell is huge array of parkland with beautiful gardens and stunning architecture. Gaudi perfected his style through inspiration from organic shapes and interpreted this into a structural solution of geometric shapes and mosaic.

Forest parties at the El Poble abandoned monastery
On Together Week Barcelona, you’ll be grooving through the forested courtyard of this old monastery to the sounds of Jackmaster, Gerd Janson, Erol Alkan, Leon Vynehall & more at the sublime Resident Advisor Party.

Gaudi’s unfinished masterpiece La Sagrada Familia
La Sagrada Familia is another stunning Gaudi work. Construction began in 1882 and was only 25% finished when Gaudi died in 1926. Still incomplete, the church won’t be finished until 2028. It’s a sight to behold.

Sala Apolo’s old musical theatre nightclub
Nitsa is a club within the old music theatre Sala Apolo. Regarded as one of the best outlets for house and techno music in the city, expect black walls, black stairs, black floors and a compelling feeling to dance until 7am.

Authentic Galician Tapas to pig out on
You’ll find authentic, inexpensive tapas bars on every corner. One of our favourites is Galician-inspired El Cañota. Serving traditional dishes like fried seafood, patatas bravas, pickled octopus, draught beer and wine, it’s one of the best cheap eats around.

Rooftop parties with panoramic views of the city
The sky’s the limit when it comes to partying in Barcelona. There’s nothing better than a rooftop rave with your mates and there isn’t a better place to do it than BCN. You certainly wouldn’t get the same vibe in freezing cold England!

Montjuic’s Magic Fountain
A fountain with its own illuminated musical performance display, located at the head of Avenida Maria Cristina in the Montjuïc neighbourhood. It’s pretty impressive!

The Infinity Pool at the Grand Hotel Central’s Sky Bar
Chilling out by Sky Bar’s rooftop infinity pool is the ideal way to end your holiday; there’s nothing better than sipping a Mojito and watching the sun set over Barcelona.

The tranquil Parc de Ciutadella
Get lost in the idyllic Parc de Ciutadella, a historical garden which was the city’s only green area for decades. Within its mammoth 70 acres is a zoo, a lake, two museums of zoology and geology and a foundation designed by Josep Fontsere, Gaudi’s mentor.