First Brazil was pushed to the limit against Chile but progressed following a dramatic penalty shootout, while Holland left it late to mount a comeback against a spirited Mexico.

We’ll start with Saturday’s second-round matches (Sunday morning’s for our readers Down Under), which were an all-South American affair – Brazil taking on neighbors Chile and Colombia facing Uruguay, the villains of this World Cup.

The first was an enthralling game, with twists and turns, drama, and pivotal moments galore, but in the end it came down to a man who couldn’t get a game for QPR last season.

It of course finished 1-1 on the night, with Brazil eliminating Chile 3-2 on penalties.

And Julio Cesar was the hero, making two crucial spot-kick saves to give his side glory.

Brazil took first blood, David Luiz putting the hosts in front after 18 minutes, but it didn’t last long and defensive frailties gifted Chile an equalizer – Alexis Sanchez, the game’s standout performer, placing his shot into the far corner of the Brazil goal after they had squandered possession from a throw in. It was terrible stuff from Brazil.

Here we need to introduce two men – Hulk and Pinilla – and you have to feel sorry for both men really.

We’ll deal with Brazil’s Hulk first and he was probably the night’s most unlucky player – he had a penalty shout turned down, his superb goal was, rightly, disallowed by referee Howard Webb and he missed a penalty in the shootout.

Chile sub Pinilla meanwhile must have broken several mirrors before kick-off himself and he had a chance to win it, and break 200 million Brazilian hearts, but his powerful strike hit the bar in the final minute of extra time.

Then came the shootout, and after misses from the seemingly cursed Pinilla and the otherwise brilliant Alexis Sanchez, Jara had to score but he hit the post as the Belo Horizonte crowd erupted, with tears all round. 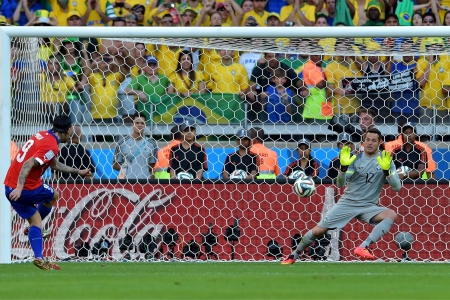 We just about had time to regroup for the day’s other game and again, it was one man that grabbed the headlines.

That man was Colombia’s James Rodriquez and he outdid Tim Cahill’s brilliant group stage strike to stake his claim for goal of the tournament (he is probably player of the tournament so far as well) with a stunning volley, which went in off the crossbar.

The excellent no.10 (who was compared to Diego Maradona for his performance) also scored the second – a brilliant team goal this time – as the often dirty Uruguay struggled without the banned Luis Suarez. 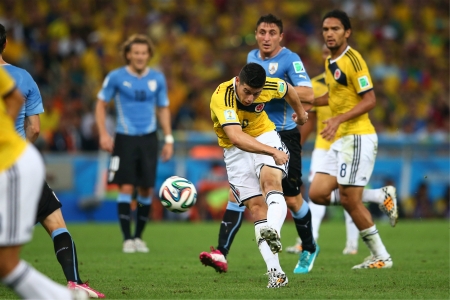 We expect Brazil versus Colombia to be some clash, although Neymar is an injury doubt after taking a knock to his thigh. He has carried Brazil so far and they will struggle without him.

Sunday’s first clash (Monday morning for TNT Downunder readers), played out in blistering heat, and saw a well-drilled Mexico control the first half and come within two minutes from a quarterfinal in their clash with Holland.

It was an excellent display but they came apart after the Dutch pressure told late on.

With the score 1-0, after a goal from Gio Dos Santos just after half time, Mexico’s keeper – Guillermo Ochoa – made several saves to keep his side in front as Holland pressed for an equalizer. And when the quiet Robin van Persie was hauled off for Klass-Jan Huntelaar you thought maybe, just maybe there was an upset on the cards.

Luis van Gaal’s move proved inspired though, and with the Dutch looking out on their feet, the Schalke man’s header set up Wesley Sneijder to smash the ball home to level on 88 minutes.

With 30 minutes of extra time looking likely, Holland’s star man, Arjen Robben, raced into the right-hand edge of the penalty area. Captain Rafael Marquez stuck out a boot and the Flying Dutchman won a last-ditched penalty. Yes, the Bayern man made a deal of it (standard) but it was a foul, and up stepped substitute Huntelaar, cool as a cucumber, who blasted the ball past the excellent Ochoa. 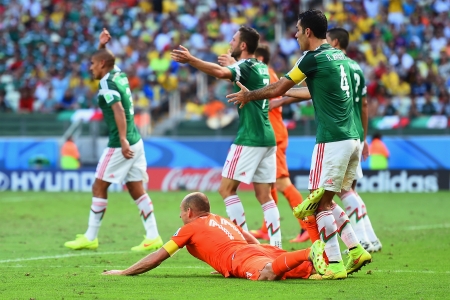 Robben goes down to win a penalty for the Dutch

Mexico had no chance to respond and was sent packing – the win meant Holland would face the winner of Greece and Costa Rica.

And it was another dramatic game with Greece drawing level against the 10-men of Costa Rica, the winners of England’s Group, in injury time to take it to extra time.

It had looked like Costa Rica were about to progress virtue of goal from Fulham’s Bryan Ruiz but another Fulham boy Kostas Mitroglou leveled it up.

And he almost won it moments later, only to be denied by a great save from Keylor Navas.

In the end it was Navas who was the hero with several key saves in extra time and then from the penalty spot in the shootout. His save of Theofanis Gekas’ effort meant that if Michael Umana could score then the fairytail would continue. And continue it did, his penalty giving Costa Rica a 5-3 win. They scored all five penalties and they were all excellent – England take note.

It was a great win for Costa Rica but Holland will surely fancy their chances of progressing and a potential semifinal with France, Switzerland, Argentina or Nigeria.