48 hours in Naples: Explore the City of Sun

In reality, the streets of Naples brim with character and history, giving a more rustic nod to the classical Italy of old. Quaint cobbled streets lead inquisitive visitors to quirky bars and markets, all under the watchful eye of the nearby Mount Vesuvius.

Take the first morning to find your bearings in a city which can, at times, seem like an endless maze of little side roads. It’s also a good opportunity to soak up the ornate furnishings of the Royal Palace in Piazza del Plebiscito. Originally home to the Bourbon kings in the 18th and 19th centuries, today the magnificent grand staircase takes you to rooms crammed with historic bits and pieces, including papyrus scrolls found in nearby Herculaneum after it was hit by the same eruption that smothered Pompeii. Afterwards, you’ll have your pick of patisserie and coffee shops dotted around the area to give you some much-needed energy for the rest of the day.

Once you’ve explored the city from above, it’s time to head below ground. Napoli Sotterranea runs tours through a labyrinth of old aqueduct tunnels 40ft below the street level, which were used as handy air-raid shelters during the Second World War. Multilingual staff guide visitors through narrow passageways – some of which are so small they’re only accessible by walking in single file and using candles to light the way. Definitely not one for the claustrophobes. Returning above ground for a short period to travel onto the Fontanelle Cemetery, you will delve straight back underground for a taste of the city’s Cult of the Dead. From the outbreak of cholera in the 17th-century to the mid-19th century, the cemetery was used to discard the bodies of those too poor to afford a proper funeral. Towards the end of the 19th century, the site was popular with people who would ‘adopt’ a random skull and pray for the departed soul.

After an afternoon underground, come up for air for an evening of bustling nightlife. First, it’s an idea to line your stomach, and what better dish than an authentic Neapolitan pizza? Often revered as the best pizza in the world, you’ll be spoilt for choice with pizzerias sprinkled throughout the city. The three-floor La Trianonda Ciro still uses the same method to create pizza masterpieces as it did when it opened in 1923. Il Pizzaiolo del Presidente is worth a stop-by, even if just for its brush with stardom – it was renamed after Bill Clinton dropped in for a snack. For drinks, start at Enoteca Belledonne which, for its showpiece, has an extensive list of white and red wines. S’move is the place to head to in the evening to throw some shapes and mingle with the locals.

Wakey wakey – it’s up early for day two! If you overdid it the night before, you’ll be glad to hear that the morning begins with a gentle stroll along the bay, which stretches on for 3km. After taking in the sea air along the tree peppered Lungomare, there are a number of restaurants lining the coast for a caffeine kick and breakfast. The medieval Castel Nuovo can be found along the coast, where guided tours lead you around the chapels, prison and museum inside. Also along the bay, you will find the 19th-century aquarium which, although small, is a satisfying way to spend an hour or so.

After coming all this way, it’s worthwhile making the short trip outside of Naples to the ruins of Pompeii. Trains depart regularly from the central Naples station, taking around 30 minutes to get to Pompeii Scavi, where the entrance to the ruins is just a short walk away. Alternatively, Viator.com offers a private half-day excursion out to Pompeii, with both transport and tour included. Taking a guided tour of the city that was destroyed by the volcanic eruption of 79AD brings it to life in a way history books never could. Visitors can see firsthand how the Romans lived, worked and bathed, while taking a wander round one of the many brothels and gazing up at the sexual catalogues painted on the walls (those Romans were a dirty lot). Tours up to the top of Mount Vesuvius also run from the nearby station, if you’re brave enough to scale the only active volcano in mainland Europe, that is.

For your last night, the city is your metaphorical oyster. The stunning Il Comandante restaurant is located within the five-star Romeo Hotel, where a Michelin-starred chef serves up a creative mix of fish dishes – yet another of Naples’ specialties. If you can draw your eyes away from the panoramic sea view, you’ll be treated to a luxurious fix of contemporary art pieces. Meanwhile, low-key jazz venue, Bourbon Street, brings a dose of New Orleans to the streets of Naples as live bands play most nights on the intimate stage. Dotted around here area few more underground bars, which are usually packed in the evenings. If you’re feeling up to embracing the cultural spirit on your last night, you might even want to catch an opera at the opulent Teatro San Carlo, ornately decked out in gold and red. However you decide to wrap up your weekend in Naples, you’ll wonder why this city is so often overlooked on trips to Italy and feel rather smug that you have uncovered it. The Mafia may have ruled here once, but they haven’t got a chance against us travellers. 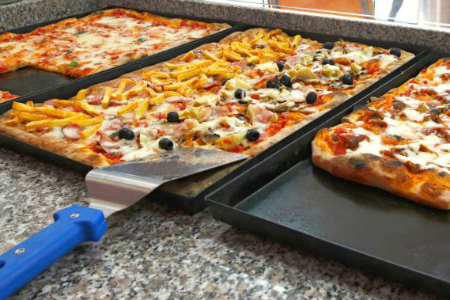 Pay with a poem on World Poetry Day!

Geelong stars to battle it out for Brownlow