And it would be hard to disagree as you wande rthe whimsical bridges of Canal Saint-Martin or gawk at the glittery Champs-Elysees, from the top of the iconic Arc de Triomphe…

Start your day by getting your bearings. A 38-second ride in Europe’s fastest elevator to the top of Montparnasse Tower will offer you spectacular views of Paris with the peaks of the Eiffel Tower and Notre Dame leading your gaze. Once you come back to ground you won’t have to look very hard for a croissant as there are great bakeries al lover. Moisan is particularly good and has a number of locations. Near the tower is the Montparnasse Cemetery where many famous writers and philosophers are buried, so you can take an informative stroll into the past, guidebook in hand.

From Montparnasse, head to the banks of the River Seine, stopping off along the way for steak-frites at one of the many classic Parisian cafes that spill out onto the pavement. Along the riverbanks you’ll see picture-perfect Paris in all its glory. There are also dozens of vintage book stalls, which are a treasure hunter’s dream. Paris’s most famous attractions are located here, with the Notre Dame, the Louvre and the Musee D’orsay perched along the banks – one or all are worth a visit, depending on your appetite for art. 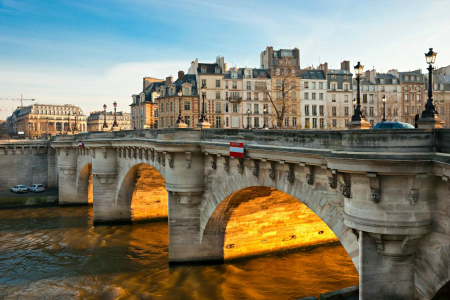 If the weather is good, don’t miss a boat-top tour of the Seine, which is a tourist must-do and can be combined with a romantic dinner on the softly-lit decks. As you drift along the water you’ll be able to catch sight of all the major monuments, the historical buildings and the ornate bridges. On board, you can opt for a narrated tour or simply take in the scenes. Bateaux Mouches is one of the biggest companies, with tours leaving from the Eiffel Tower or Bateaux Parisiens offers a great three-course dinner

Pigalle is the centre of the unique Paris nightlife with glaring neon lights and a raunchy reputation. Full of mythic lesbian cabarets, 24-hour peep shows and historic mansions turned debaucherous clubs, your night will see no end. Start in Hotel Amour with disco balls on the ceiling and Terry Richardson photos on the walls. Next, head to Carmen with its life-size birdcages and romantic statues throbbing alongside the all-night DJ sets. The club, which is in a former 19th-century mansion, also has an audacious cocktail list with absinthe concoctions or even some foie gras options.

If you’ve been up all night, as we hope you have, then seize the day and grab breakfast in romantic Montmartre near Pigalle. Coquelit bakery is packed to the brim with freshly made bread and pastries that only the French know how to make, and its coffee will give you that kick you need. Next, stroll through the cobbled streets and manicured gardens of Montmartre until you get to the Sacre Coeur, which looks like it’s straight out of a fairytale on its perch high up on a hill. The Boulevard de Clichy at the bottom of the mound is full of kebab stands and sex shops, making for an interesting contrast with the church above.

You’re not far from Canal Saint-Martin here, which appears in the whimsical French blockbuster Amelie. The recently-gentrified area is now full of cute cafes and boutique shops, not to mention some great markets through the week. There are also lots of curious shops that specialise in just one thing, from olive oil to communist literature to piñatas. Along the way are also many quirky museums and galleries such as the Musee de l’Eventail which is devoted entirely to fans, showcasing at least 1,000 examples from the 18th and 19th century. If you fancy a break from French food, try the experimental pizza at The Pink Flamingo, with toppings such as figs, pistachios, goats’ cheese and honey – bizarrely named ‘The Brangelina’. We’re still not sure why.

On your travels, look out for streets with names such as ‘Passage du Desir’ and ‘Cite du Paradis,’ making up some of the whimsy and beauty of this area. 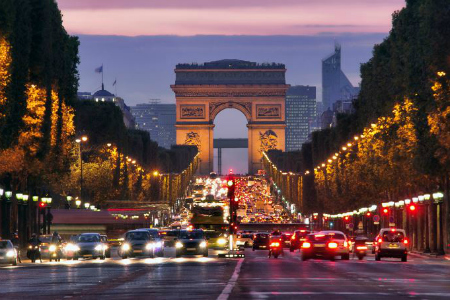 For your last night, treat yourself at a glammed-up Michelin-starred restaurant – you are in Paris after all, and it’s all part of the experience. But before that, be sure to take in the dimming city lights from atop the Arc de Triomphe, which stands tall as a monument to those who died in the Napoleonic Wars. With 234 stairs to climb you will definitely build up an appetite for dinner. Nearby, there is Alain Ducasse’s flagship restaurant at the Plaza Athenee, where you can enjoy a luxe meal like no other. It may be a big blow-out, but you are in the culinary capital of the world, and it could be a once-in-a-lifetime opportunity. There are plenty of other slightly less OTT (but still fancy) bistros around the glittery Champs-Elysees shopping district. The art-deco Chez Savy has good food with foie gras made on site. A la carte prices are high, but there is a set menu with three courses for £25.

The weirdest ways to spend a lottery win