The region has an edgy energy – almost a breathless quality – about it: the intense, relentless heat; the surreal, mystical labyrinthine souks and medinas, some of which look so unearthly they have been used in films set in space (some Star Wars scenes were set in Tunisia); the ruins and temples scattered about the land like sweets waiting to be discovered afresh.

These places create shapes on the horizon; extraordinary landscapes that tell of a civilisation much more cultured than our own today. You will wonder if the pyramids of Giza or Abu Simbel were built by aliens as, according to the architects of today, we would have issue with creating buildings of this scale, design and quality today, even with our modern technology. Then there’s the Red Sea; rich in tropical fish and coral and WWI wrecks; a stunning underworld kingdom, flocked to by divers wanting to learn or improve their skills while exploring the clearest, warmest and most fascinating of waters.

You don’t need to read books to learn about the history of Tunisia, Morocco, Egypt, Algeria, Sudan and Libya – just walk among the many archaeological sites and Seventh Wonders and stand and breathe it in, for a moment letting go of the iPad, camera or iPhone which renders you once removed from what’s in front of you. Simply look with your own eyes.

In Libya and Sudan, alcohol is banned, and during Islamic holidays such as Ramadan, which is in July and/or August, it is not available in the other countries. Visas are required for Libya, Sudan and Algeria, and you are able to obtain a visa on arrival in Egypt.

Each country has made the news pages for civil war and political unrest over recent years, providing a living history for a region that has had its share of internal conflict through the ages, like a live volcano simmering. Keep this in mind when making a big trip to Northern Africa: check the government website so you are fully prepared. Explore and enjoy, but tread with care, confidence and always respect.

Star Wars was filmed here among the rock buildings of Ksar Hadada, Ksar Ouled and Onk Jemal, which doubled as the fictitious land of Tatooine. The souks and medina of Tunis and Sousse will keep the shopaholic occupied. Take an empty suitcase for the silver jewellery, carpets, Nabeul pottery, leather slippers, copper plates, blankets and basketwork you will want to take home. Explore the city of Carthage and the temples of Sidi Bou Said, Kairousan and Kerkuon. El Djem, Le Kaf and Dougga are like old storytellers waiting to speak to you as you walk their streets and around their walls. Go in spring and autumn when the season is mild, avoiding the heat of the summer and the cold and damp of the winter months. What to do: Tour in the mornings before the midday heat makes sightseeing intolerable. The capital, Tunis, hosts a seventh-century medina, the Zaytuna Mosque, the perfume maker’s market at Souk el-Attarine, the Tourbet el-Bay mausoleum and the Bardo Museum. 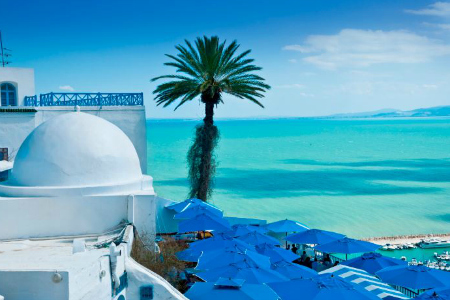 Go to Carthage just to say you’ve been there, although there are few remains on the site, but check out the Punic area of Byrsa, the ruins of the Antoninus Baths and the amphitheatre where the arena remains and children were sacrificed to the Gods. For time at the beach, visit Sidi Bou Said, a white-walled town with bright-blue railings and patios full of flowers by the sea, or the island of Djerba, which has good beaches and the interesting souks of Houmt-Souk.

Tunisian staples – couscous, harissa and baklava – have made it onto the shelves of most English supermarkets and delicatessens. Other dishes such as brik – a snack of fried egg in a pasty with tuna or vegetables and kamounia – a thick meat stew seasoned with cumin and other spices, have yet to do so but are worth trying. Unsurprisingly, the major cities have the widest range of restaurants. Try out Dar El Jeld or El Ali in Tunis, Café Seles or Una Storia in Sousse.

The tourists party in Hammamet. If you want to avoid tourists, check out Le Boeuf Sur Le Toit in a suburb of Souka in Tunis, where the hip-happening locals go as well as travellers in the know.The Café des Nattes (Sidi Bou Said) is an institution in Tunis worth checking out.

Dars are the Tunisian answer to Morocco’s rhiads. Originally townhouses, contact direct and bargain rates as you would in the medina. Hotel Dar Said, six miles from Tunis-Carthage airport, is a lovely little hotel with character by the sea in the charming village of Sidi Bou Said. Prices start from £160 per night. For a fraction of the price but with the charm, La Chambre Bleue in Tunis offers a studio-sized room for £56 per night.

Whether you believe the Egyptians built the pyramids or aliens landed and built them for us, you will marvel at the ancient sights of the Pyramids of Giza, the Temples of Luxor, Abu Simbel and the Valley of the Kings.

Cruise the Nile in a traditional felucca (sailing boat) to get an overview of Egypt’s past on the most scenic route from Luxor to Aswan. The Pyramids of Giza are within a stone’s throw of the south-western suburbs of Cairo, one of the Seven Wonders of the World; although the first wonder most visitors experience is how close the pyramids are to the city. The Great Pyramid of Khufu, the largest of the pyramids, is 139 metres tall. The head of the Great Sphinx is thought to be modelled on one of the three generations of pharaohs – Khafre, Khufu and Menkaure – all of whom are buried here. Dive the Red Sea among the tropical fish, WW1 wrecks and colourful coral. Sharm el Sheikh is the most touristy, Dahaband Hurghada the more bohemian. If you don’t dive, it’s a cost-effective place to learn to. The UNESCO World Heritage site of Abu Simbel, the temple cave guarded by the statues of four gods, was built by Rameses II in the 13th century BC, dedicated to himself and his favourite wife Nefertari. He must have really loved her. The spectacular and extraordinary Valley of the Kings in Luxor hosts 63 royal tombs and chambers decorated with scenes from Egyptian mythology. 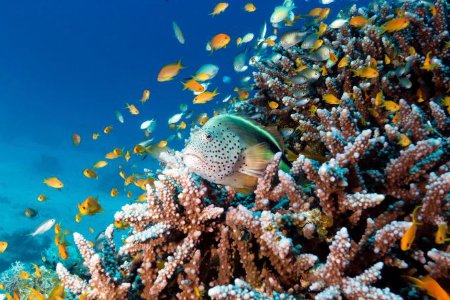 Kusahri, Egypt’s national dish, is made up of pasta, tomato sauce, rice, lentils, caramelised onions, garlic and chickpeas. Halawa is made from sesame paste and sometimes infused with pistachios, pine nuts and almonds. Locals love Akher Sa’a (8 Shari‘ Al Alfy, Cairo Downtown, 022575 1668) and the Fish Market Americana boat (26 Shari’AnNil, Giza The Pyramids 02 3570 9693), where you can choose from the daily catch.

Dahab Paradise on the Red Sea offers the best diving on your doorstep. Prices start from £37 for a single room. Or Albabenshal in the Siwa Oasis is a beautiful mud brick hotel built into the walls of the town’s ancient citadel. From £24 for a single room.

Want to read on? Download a copy of our eMag or pick up a copy of TNT around London. Find your nearest copy of the mag here.

Looking to start your own African adventure? Look no further than TNT Tour Search!