Greece is home to thousands of beaches, each with its own character and delights, but some have certain qualities that elevate them above the rest.

Simos Beach, Elafonisos
Located on the Isle of Elafonisos, just off the southern point of Greece, is a beach so tantalising you’d be forgiven for thinking you’d somehow wandered from Greece to the Bahamas. Even on the surface, Simo’s beach is head and shoulders above the rest. White sand, grassy dunes and a clear, azure, ocean coastline spreading beyond it. However, it doesn’t stop there, because Simo’s has a rather extravagant centerpiece. The sand converges from both edges of the beach, meeting in the middle and stretching out into the ocean to create a tropical island-like peninsula. Not only does this make a stunning place to visit, but it creates two lagoons perfect for swimming and relaxing in.

Red Beach, Santorini
Being an island born from the heart of a fiery volcano, you can imagine Santorini has more than enough on offer when it comes to unique sights. When it comes to beaches then, you are spoilt for choice, but you simply can’t beat the Red Beach. Found on the southern point of the island, Red Beach is as unique as the island itself. The warm waters of the Med flow onto its red sand and rocky beach, which stretches away from the coast to the bottom a steep cliff face; red as the sands beneath. Affectionately known as the lava beach, this vibrant setting is guaranteed to be a place you remember for years to come. 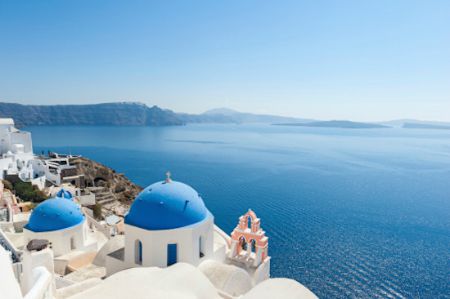 Navagio, Zante
If you’ve ever been on a Greek tourism website, or Facebook, you’ve probably seen a picture of Navagio beach. Also known as Shipwreck Cove, this completely encapsulated beach is only accessible by water; unless you’re good at abseiling, that is. A small sandy paradise, cutaway from the outside world, it is home to a large rusting boat that sits on its shores; a smuggler’s boat that ran aground many years ago. Sometimes a serene and quiet place, other times the party capital of Zante, Navagio is one of the most famous and picturesque places in all of Greece. One that should not be missed.

Sarakiniko, Mylos
Sarakiniko beach is nothing short of a natural spectacle. You won’t find any sand near this place, instead you’ll discover a slice of narrow ocean cut between a glossy white rock formation. Away from the brutal elements of the ocean, this little oasis is the perfect spot for a relaxing swim while still enjoying the best natural elements of Greece.

Balos Lagoon, Kissamos
The beach itself of the Balos Lagoon is beautiful, but it isn’t why you’ll be wanting visit this incredible location. Across from the beach is tall, cliff-bound, island, another beautiful sight, but still not what we are here for either. Instead, it’s the space between the beach and the island that makes this place special. Thanks to its unique location, the offshore island creates a sheltered and shallow basin between itself and the beach. Here, visitors can wade through the crisp and clear Med waters and enjoy a completely new angle of Greece’s natural world.

How to Improve Your Chances of Becoming FCA Authorised