7 must sees of the Mediterranean

From some of the most famous architecture, to the oldest archaeological sites – the countries that frame the Mediterranean have it all.

In saying that, the amount to see and do can be overwhelming. As a starting reference, here are seven that should definitely make it onto your Mediterranean adventure itinerary.

Cinque Terre (pictured) is a place full of enchantment, culture and colour. Meaning “Five lands” it is aptly named for its composition of five cliff-side, fishing villages.

The ancient set of footpaths is definitely the way make the most of a visit. Abundant with incredible views of the clear blue Mediterranean sea, the footpaths wind through olive and grape cultivations, eventually descending into the brightly coloured terraced villages.

Croatia is well known for its breathtaking old towns, but none so much as Dubrovnik. Known as “The Pearl of the Adriatic” the city is rich in history, good food and artistic culture. Better yet, it is incredibly affordable.

After its defence against bombing in 1991 capturing the world’s attention, the city has bounced back with passion to establish itself as a tourist destination like none other.

Standing tall in Barcelona and under construction (still not finished) for over a hundred years, Antonio Gaudi’s La Sagrada Familia is like something from a Doctor Seuss book. Bathe yourself in the church’s incredible colours, be inspired by its unique architectural phenomena and leave feeling like you have just walked through a fairytale.

How many people can say they enjoyed a pesto pasta while watching a volcanic eruption? An often overlooked (or never head of) destination, Stromboli is a must-see for volcano enthusiasts, hiking nuts or even someone wanting to lie all day on a beach with cocktail in hand. As one of the most active volcanoes in the world, you’re guaranteed a show. Plus it has beautiful Italian township filled with shops, restaurants and cafes. 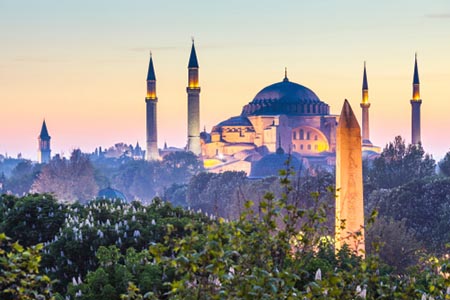 While this list could be filled with Turkey’s treasures, you can’t miss the Blue Mosque (pictured) – both figuratively and literally. This 17th century masterpiece dominates Istanbul’s skyline and inspires awe from all those who visit.

If you have never been to Greece, you will certainly have some predeterminations due to this place. White buildings, blue roofs ring a bell? Santorini is the epitome of the Greek island getaway. You can find culture in droves here, as well as great shopping, cliff-side bars and world famous sunsets.

A seemingly floating city is something no one should miss out on seeing. Built on 118 small islands, separated by postcard-worthy canals and linked with romantic bridges, Venice is a lover’s dream. Be sure to lose those maps and yourself amongst the twisting and turning pathways – it’s the best way to explore it!

There’s more than a lifetime’s worth of places to see in the Mediterranean. Each country that touches its warm waters is rich in history, have their own independent identities and play extremely well to the tune of tourism. So build your list and start checking them off!

Where else in the world can you find this?!?!