Yesterday’s 9/11 memorial service in London was blighted by clashes between the English Defence League (EDL) and Muslims Against Crusades (MAC). Around 40 people were arrested and a man was stabbed.

As crowds gathered to mourn those lost in the 9/11 terrorist attacks ten years ago, two groups of extremists scuffled and shouted slogans at each other. 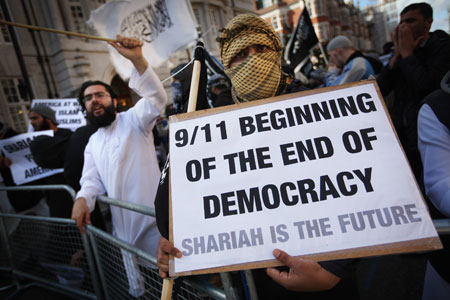 A Muslims Against Crusades member holds a sign at the 9/11 memorial on Sunday.

Militant Muslim group MAC burned the US flag during the minute’s silence being held outside the US Embassy in Grosvenor Square. The group chanted "USA terrorists" and held anti-American placards.

EDL supporters swigged beer and threw glass bottles at the MAC protesters as police tried to disperse the groups to prevent a confrontation. Many EDL members resisted arrest and scuffles with police broke out. 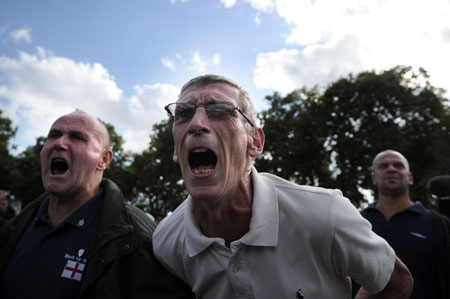 A smaller counter-demonstration was held nearby, with protesters holding signs reading “Muslims Against Extremism” and “If You Want Sharia, Move To Saudi.”

Later in the evening two EDL members were stabbed by Muslim youths outside the JD Wetherspoon pub on Edgware Road, near Marble Arch,, according to reports. 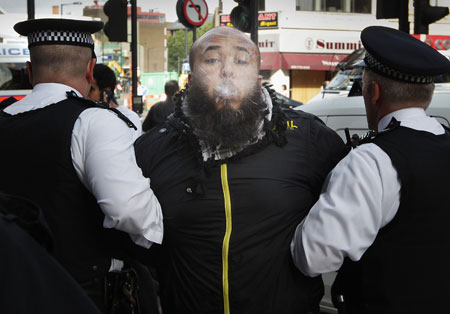 A MAC supports spits at the photographer as he is led away by police.

The condition of the two victims is unknown but the spokesman said they remained conscious following the incident.

A man present at the Grosvenor Square memorial, whose cousin died in the 9/11 terror attacks, said: "They shouldn't be allowed to do it. It's very disrespectful. It's too loud.

"They can say what they want but not with the loudspeaker. They shouldn't obstruct the service." 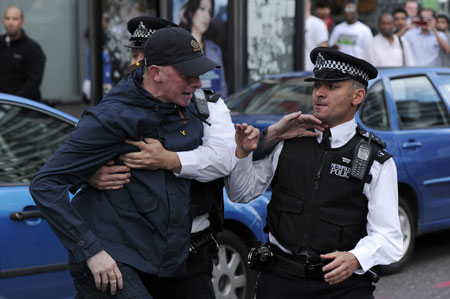 An EDL member resists as police try to restrain him.

7 Tips for Better Sleep When You Travel

Feast of the Immaculate Conception