A holiday in Cambodia – TNT scopes out the Cambodian coast

You can’t blame them for making an assumption about a rucksack-toting white girl. After all, most visitors come to Cambodia for little more than a hit-and-run tour of its rich and tragic history – the sublime temples of Angkor Wat, or Phnom Penh’s macabre monuments to its bloody past.

But, right now, I’m not looking for Cambodia’s history. I’m looking for a £20 taxi to meet friends in Kampot, a sleepy riverside town with buttercup-yellow colonial buildings and the jump-off point for our tour of Cambodia’s rustic coastal regions.

I snooze in the cab. It’s easier here than on the £3 bus, where karaoke videos blare and drivers lean on the horn with a frequency that suggests it’s more a psychological balm than anything else. Shutting my eyes seems preferable to watching the road, which can be, frankly, arse-clenchingly alarming.

Some three hours later I arrive at our guesthouse, Les Manguiers, 2km out of town on the wide Kampot river, cooled by a serene breeze. Resident goats make a comic attempt at disturbing the peace, alternating cautionary brays with absurd sneezes.

The owner is a mop-haired, affable chap called Jean Yves, who peppers his speech with plenty of Gallic “ehs” and “bouffs”. We’ve decided to hike to a waterfall, and Jean draws us a map (pass a lotus pond, left at the temple), hands us a packed lunch and motors us across the river. We set off through banana and jackfruit trees.

The warmth and generosity of Cambodians I meet throughout this trip strike me again and again, made all the more remarkable by the horrors of recent decades. A couple of examples from today alone: we predictably lose our way on the hike, but just as panic takes hold, we come across a local repairing his small farm’s irrigation system, who promptly leads us to the splash pool (“Whoooosh” is the universal word for waterfall, it seems) and rewards himself with a quick dip. On the return leg, local men playing cards insist on sharing their watermelon with us, for no other reason than because we are passing. Parched and flagging, we’re grateful for the refreshment, but they won’t accept payment.

After taking the night to recoup, we visit Bokor Hill Station, built by the French in 1922 as a retreat from Phnom Penh’s swelter, and abandoned in 1972, when the Khmer Rouge took over the area. The burned-out and lichened grandeur of the buildings, including a palatial casino and a Catholic Church, is haunting – or at least it would be, if our guide would stem his incessant stream of jokes and animal impressions for a few seconds. He doesn’t. “To walk up the mountain, it takes one hour,” he continues. “To walk down the mountain, it is faster. Because of gravity.”

Bokor is rich in wildlife, so we also enjoy the company of armed forest rangers, there presumably to nip any impromptu poaching in the bud. They scamper up and down the pitted, slimy trails in flip-flops and hold AK-47s, putting us red-faced, plodding foreigners to shame.

If you can, visit Bokor soon. The government, ever attuned to the prospect of a tidy profit, has leased the site to one of Cambodia’s biggest developers.

They plan to redevelop the smoke-blackened casino,
and build a massive new hotel halfway down the mountain, for which foundations are already being laid. Tourism accounts for roughly a fifth of the GDP here, so you can’t really blame the government for wanting to capitalise on an attraction. But it’s also difficult to see how a huge, glitzy hotel on this remote mountainside could be anything but bone-jarringly out of place. 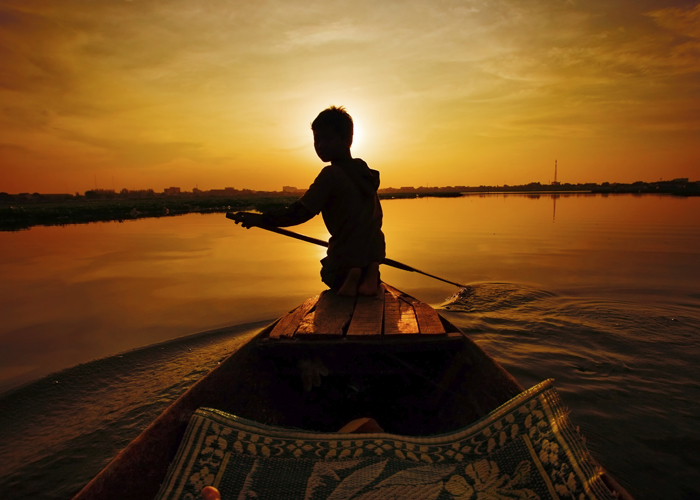 Next up is Kep, another erstwhile favourite of the French and Cambodian elite. Here, too, history proves hard to escape – the town is dotted with the bombed-out bones of once-grand seaside villas targeted by the Khmer Rouge for righteous destruction.

But while Bokor is eerie, Kep is vital. Colourful flowers and lush vegetation erupt from the ruins, and yet more irrepressible goats have the run of the place (they bear no respect for personal belongings). Monks in ochre robes amble down rust-red tracks, and local kids compete to give us directions to the crab market, thrilled to practice their English. It’s peaceful, but not a ghost town. “What really strikes me in Kep is the sense of isolation,” my travel buddy Dmitry says. “But in a good way.”

Kep National Park looms above the town, and can be circumnavigated in two hours – just long enough to warrant a reward at Knai Bang Chatt, a dazzlingly white luxury hotel on the seafront. The rates, which begin at $115 (£73) a night, are too rich for our backpacker budget, but we savour the two-for-one happy-hour cocktails as the sky blushes pink over the Gulf of Thailand.

The seafood in this town is famous, and rightly so. Our waitress at Kim Ly, for my money the best of the restaurants in a row of stilt houses jutting out over the water, tells us that Kep crabs are particularly delicious because they spend half their lives in the mangroves, and “it makes them fat”.

After the waitress takes our order, we see her brother calmly wade into the pitch-black sea and pluck our still-living supper from a tethered wooden crate. They are unbelievably good – plump, succulent, and perfectly spiced with fragrant local green pepper.

Mainland Kep doesn’t have a decent beach, but the scruffily idyllic Rabbit Island is only a 20-minute boat ride away. Here, you’re as likely to meet a friendly puppy or a cow as a fellow sun-seeker. Good seafood, cold drinks, and massages are on offer, but there’s no sense of urgency – it’s all tout-free and wonderfully laid-back.

There are a few bare-bones bungalows where you can stay, but don’t expect a scene – the handful of locals shut off their generators after 9pm. 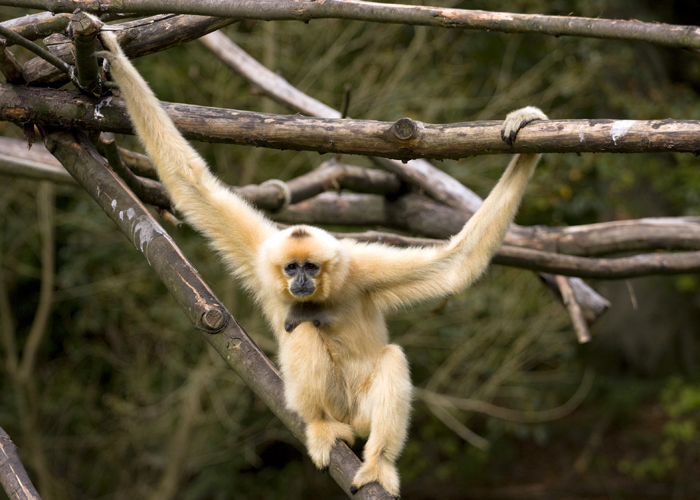 Our last stop is Koh Kong. Four of us split a taxi and squeeze ourselves in for the five- or six-hour, £45 ride.

Until recently, residual fighting and poor infrastructure meant Koh Kong remained largely untouched by tourists. Now new roads and bridges have allowed eco-tourism projects to flourish and help protect the area by giving
a wage to locals who have historically logged the rainforest or poached to survive.

We’ve opted for Rainbow Lodge, a solar-powered cluster of bungalows wedged in a verdant corner between the Tatai river and the edge of the Cardamoms – an expanse of rainforest containing some of Asia’s most endangered species: Malayan sunbears, clouded leopards and Irrawaddy dolphins. Janet, Rainbow Lodge’s British owner, sends a boat to meet us at the bridge where the taxi drops us and take us down river to our bungalows.

Koh Kong is a great spot for energetic travellers, and we’re pretty busy over the next few days. We bike to a tangled, otherworldly mangrove swamp. We kayak up the Tatai river to a waterfall. (I’ve never seen so many butterflies.) On a day-trip to Koh Kong Island, which has painfully beautiful beaches, deserted but for a few yawning Cambodian soldiers, a pod of dolphins frolics in the wake of
our boat. And, somehow, we also manage to spend a decent amount of time lying in hammocks, cold Angkor beer in hand, listening to gibbons holler and whoop in the trees, as though at a raucous party. I willfully push thoughts of returning to the city out of my mind.

On our penultimate night, we take Janet up on the offer of a night in the jungle. I love the outdoors, but remain a reluctant camper, having one too many grim childhood memories of a wet holiday spent pathetically needling my sisters to play cards with me. But this is no dank Welsh hillside. At the spot we reach, after a few hours of trekking through the jungle, the river snakes and flattens out into
a wide, tranquil pool, and the vista opens up to reveal
clouds settling over an adjacent peak. We dive into the water. Our guides pitch shelter and set up a barbeque. Despite the jungle’s cacophony, I sleep like a baby, well-fed and exhausted.

It strikes me, lying here, that so many come seeking Cambodia’s history that they miss out on what might be
a short-lived heyday for these quiet areas. This could be
a tipping point – political stability and growth have allowed access to these remote regions, but that access has yet to
be exploited in full by aggressive economic interests.

Last April, prime minister Hun Sen withdrew permission for a titanium mine in the Cardamoms after a campaign by conservationists. It’s a win, but it’s hard to say if this sudden eco-consciousness will last – the decision came as a surprise
to many here, and his track record elsewhere hasn’t been great, to say the least.

But for now, this part of Cambodia remains enchanting and feels a world away from the crush of Angkor and Phnom Penh’s museums. Come see it while you can. 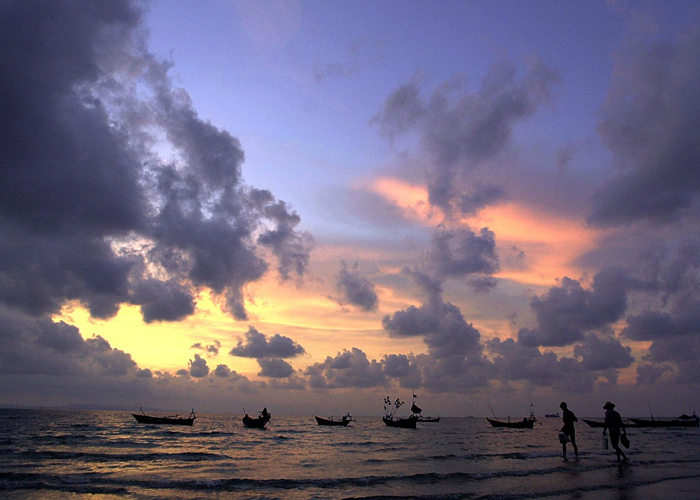 Friendly and relaxing French-owned guesthouse 2km out of Kampot with a mix of families, expats and backpackers. Call ahead if you’re coming from Phnom Penh on a Friday afternoon – Jean runs a minibus service every weekend for stressed-out expats. Rates range from about £6.50 for a double room with shared bathroom to £45 for a large wooden house with three rooms, each with private bathroom and balcony. Free access to kayaks and bikes.

Incredibly scenic eco-lodge, pictured above, perched on
the edge of the Tatai river, with the rainforested Cardamom Mountains stretching behind. Free access to kayaks for puttering about on the river, and, Janet, the owner, can arrange trekking, boat trips and camping.

WHEN TO GO: December to February, when the weather is dry, and the vegetation is still green from the wet season.

SEE: For trips into Koh Kong’s mangroves, Rainbow Lodge (rainbowlodgecambodia.com) will set you up with Rai on  +855 (0) 16 629 941. An eco-tourism project in Koh Kong employs former hunters to run tours. (ecoadventurecambodia.org) Cheang Try Tours in Kampot runs trips to Bokor, Rabbit Island and caves and can also provide motos to rent. (kampot-cambodia.com)