A home that floats: why be a London landlubber when you can live on a houseboat?

Being rocked to sleep, sipping wine on the deck, waking up to geese at your window – it’s the stuff holidays are made of.

But you can have this without going anywhere. Floating homes range from a central London houseboat with tidal Thames moorings, to pretty canalside garden docks.

And, given the current state of the capital’s property market, maybe renting a room on the water is not a bad option. TNT speaks to some boat dwellers to find out what it’s like.

A little piece of history

“It’s very easy to get people to come to you if you’re trying to meet up,” says London showgirl Ophelia Bitz, of the perks of living on the water.

The 27-year-old’s home is the World War Two torpedo boat MTB 219, built in 1942, and with the sinking of German ship the Sea Addler as a notable moment in its illustrious history.

“The history of the boat is wonderful, which obviously makes it a very cool place to live,” Bitz says. She is one of four people who each live in a cabin on the vessel, which is moored on Cheyne Walk in Chelsea.

The cabins are a little on the pokey side, Bitz admits, but she’s often on the deck anyway.

“Everything is just so peaceful on the river,” she adds. “I love having that extra bit of privacy, and the ducks are always around. It’s beautiful.” 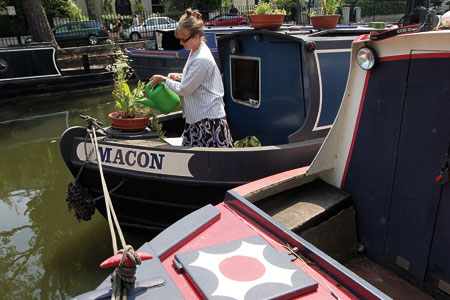 It’s the community that boat-dwellers appreciate the most, says Kiwi Nick Bibby, 37, who has lived on a boat for four of his 10 years in the UK.

He resides in Shad Thames, on an old Dutch barge called Ilka, with the looming Tower Bridge in eyeshot and St Katherine’s docks across the way.

“Everyone on the moorings really looks out for each other; it’s quite a social little neighbourhood,” Bibby says. “I’ve lived in heaps of flats in London and never knew the people living around me. But boating life definitely attracts a certain kind of person.”

Bibby’s first experience of living on a boat was with an ex-girlfriend. The two rented out a 60ft narrow boat one summer and continuously cruised around London, spending weeks at a time moored by parks or in marinas.

“We didn’t need a licence, so I guess there’s a lot of trust involved when someone hands over the keys to their boat. But there’s not much to it, you just turn on the engine and go.

Narrow boats are really heavy, though, and don’t stop quickly. We did manage to smash plates and glasses on our first few trips.

Returning to bricks and mortar is difficult to fathom, Biddy says. “While I’m still in London, I can’t see myself living anywhere else. I’m in one of the best locations in the whole city,” he adds.

“It’s amazing to set out on the deck and have breakfast, or sit out there in the evening when it’s calm and the sun’s going down. It’s a million-dollar view.” 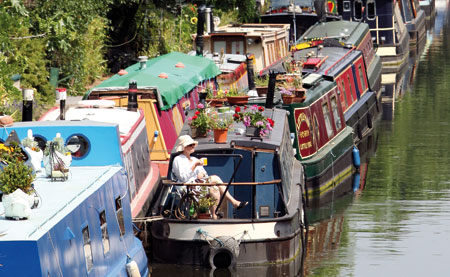 Boats are definitely not for the highly strung. “You’ve got to be flexible, because every now and again you might have a power outage, or a pump in the shower might fail, and you have to accept that. If you easily get stressed, boating life is not for you,” Biddy says.

It’s a sentiment confirmed by Ivor Caplan,  planning officer at the Residential Boat Owners Association. “We get a lot of young people who are keen to try out boat living as an alternative lifestyle, but it really helps if you have an affinity with the country’s inland waterways system, and you understand the environment,” he says.

Cruising houseboats, as opposed to those that are permanently moored, require plenty of maintenance.

“You have to think about things such as filling up your water tank, and the less pleasant jobs are emptying your toilet, and finding a way to hook up to electricity,” he says. 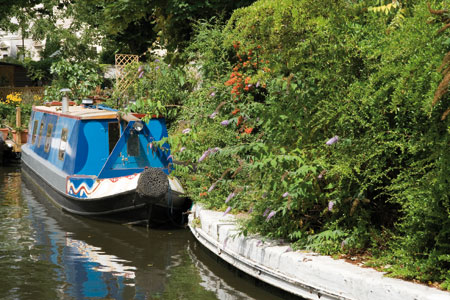 Give it a burl

The cost of renting a cabin on a boat can cost anything from £300 to £800 per month, and bills may, or may not be included. “It’s less expensive than an unheated, uncarpeted warehouse in Shoreditch,” Bitz says.

The best way to find room to let is via the website apolloduck.co.uk or gumtree.com.

Generally speaking, they are safe to live in, as many are within gated moorings, or there are security guards on the pontoons.

Keep in mind, however, every few years, your boat might be taken into dry dock for several days at a time, so you’ll need to find a temporary home. Happy boating!

Life on the water

Get rid of all the non-essentials. Given the confined space, boat living is minimalist living, so downsize your possessions and pack what you’ve got neatly into the boat.

Got some change to spare – and then some? The average price of a canal boat, which is the most common form of floating home, is between £60,000-£100,000, according to the National Association of Boat Owners. And, if you are buying, it’s best that it comes with a mooring as they are very limited in London.

A permanent mooring in Little Venice, with access to utilities, could cost about £7000 a year.

Approximately 6000 of the 34,000 licensed boats on British waterways are permanent residences.

It gets cold on a boat, and frozen taps/showers, etc are commonplace, so you’ll need to be hardy. And, if you’re the high-maintenance type with an appliance for all occasions, forget it – most of them use too much power.

You need to be proactive when searching for a room to rent on a houseboat as they are in demand, so get snapped up quickly.

You still have to pay council tax when living on a boat, however it is always set at Band A, which is the lowest band.

Want to know where your toilet waste goes? No? We’ll tell you anyway. On tidal moorings, boats are generally fitted with macerators, which turn waste into clear, odourless liquid and spit it out into the river.

Canal boats usually have a black-water tank, which can be pumped out at a station.

Class of the week – Kranking