A job for the boys: Fancy taking off your clothes for money?

Going to see a male stripper is usually top of the list for tacky hen nights. However, with quirky cabaret shows booming in London, there’s demand for men prepared to shed their clothes and get on stage every night of the week.

The popularity of Magic Mike – starring Channing Tatum and Matthew McConaughey as strippers – proved it, becoming a surprise box office smash. But you don’t need to be ripped with muscles to perform.

Male acts come in all shapes and sizes. So, guys, if you’re seriously considering baring all (or, at least, some) for the sake of entertainment, where do you start?

Here, TNT tracks down those in-the-know in the industry, to give you a heads-up of what to expect. Buff Boy Jacks, Cabaret artist
Mos Lawrence, aka Buff Boy Jacks, performs every Saturday as part of the Wam Bam Club in Cafe de Paris. After training in musical theatre, Lawrence performed on stages around the world for 16 years.

He got noticed by Lady Alex from the Wam Bam Club as he was walking his dog near his home in Soho. “It was sunny and I had taken my top off,” he says. “She saw my potential! Next thing, I’m stripping in front of hundreds of people.”

Lawrence describes his act as “celebrating manliness with plenty of thrusting, bum wiggling and cheekiness”, having performed themes such as a “naughty nun and sexy sailor”. So how far does he go?

“As far as the licensing laws will let me!” he laughs. But while it may seem likea giggle, it’s a lot of hard work for which you’ll need confidence, a good sense of humour, and the ability to adapt to different audiences.

“Having to keep fit at all times has meant I’ve had to say goodbye to chocolate and hello to early morning gym sessions. Needless to say, the harder you work, the more you will earn,” Lawrence adds. 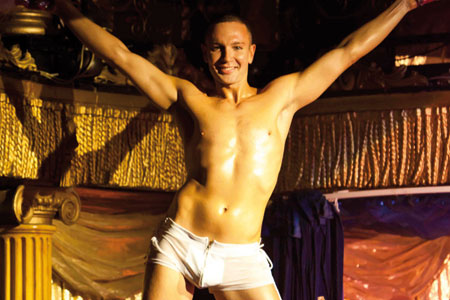 David Barnes’ started out the frontman in bands before making the move to burlesque as a singer. He joined an all-male troupe called Bearlesque, recalling: “I replaced a member and in a week I was on a West End stage doing comedy striptease!”

Barnes, who has qualifications in music technology, earns at least £500 for a corporate gig, but says it hasn’t always been that good.

“Expect to do unpaid gigs for quite a while, or a split of the door,” he says.“Be patient. Be humble. Be good. Then the work will come. And don’t rub people up the wrong way!”
(volupte-lounge.com) 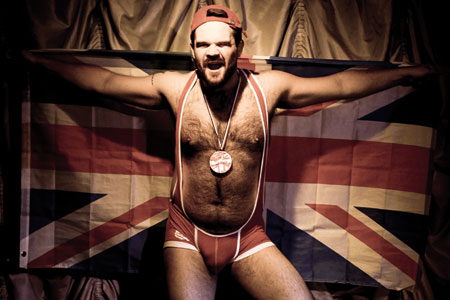 Ian Stroughair – stage name Velma Celli – got into performing 15 years ago, at the age of 14, then applied for a three-year musical theatre course.

After a career in the West End appearing in shows such as Cats, Fame and Chicago, Stroughair moved into direction and choreography, and also teaches at Pineapple Dance Studios. Evenings he can be found performing at Circus and Proud Cabaret.

For anyone considering a career on the stage, he says it’s important to keep evolving as an artist, adding: “It takes years of vocal training, acting classes and ballet, tap, modern and jazz dancing lessons.

“It’s not all glitz and glamour. It’s work ethic and guts that get you there!” Stroughair is gearing up for his Velma Celli show at Proud Cabaret City on September 12.

“It takes the audience on a satirical journey through jazz, pop and musical theatre, and parodies your favorite TV shows. It’s a laugh a second.”

Yes, that’s right, you can go back to school (sort of) to learn how to remove your clothes. adoniscabaret.co.uk offers an eight-week course.

You’ll learn about the history of stripping (see, and you thought it was all about getting naked), music, costumes, stage shows and how to handle enthusiastic women. Right.

Salary Expect anything up to £20,000 when you’re starting out.

Training For cabaret, acts will often have a theatrical background. For stripping, you’ll need to have a good body, which you look after (ditch the tinnies and burgers). You’ll also need to dedicate your time to training, everything from cardio to weightlifting if you’re taking your shirt off.

Character Retiring wall flowers need not apply! Make sure you’re confident and like to be in the spotlight.

Balter Festival is back for a third year of madness

The best ways to forget about your hangover – fast!